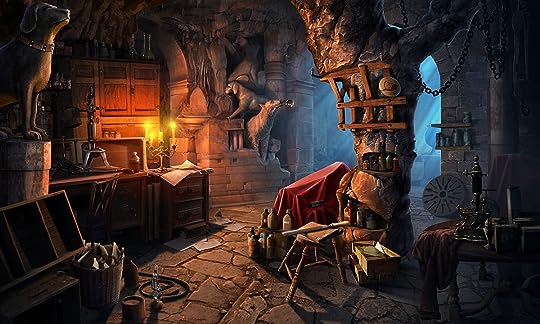 Morza. The Blood Child. The Wimp. The Second Child. So many terrible names filled his head as the male turned the corner and into the main hall of the Laboratory. Turning his head to look behind him, he was satisfied with seeing no one creeping up on him. Perfect, the male solemnly thought, turning back and creeping quickly over to a table of some of Kallinicus' stuff. Kallinicus, that bastard. He hated him with all of his life and still Morza was terrified of that man. For. . . reasons others did not need to know. But if you would see why the main thought you'd have was physical abuse. Running his fingers through the sheets of paper, Morza glanced back and forth between the words, trying to find yet another clue to an entrance or exit out of here, a clue that could lead to one, a weakness within the stone walls of this prison for hell's sake! Scoffing to himself, the male pushed the sheet aside and looked at the others. There had to be something here, something. . .

Mod
(SOMEONE BE SNOOPIN'??)


Actually no he'd probably get rekt by the wind girl )))

(Tbh, my thief would be the main person snooping about, if she felt up to it of course. *coughs while gesturing 'payment required' *)

jellybean wrote: "Love and Sacrifice (Kura~) wrote: "(SOMEONE BE SNOOPIN'??)"

((oh nu....tenma might be ebil but he really loves kids and would have even more sympathy over the 4 children since he's also experimented on...OWO))

Aaden had let out a nearly silent sigh when he noticed the obvious. His brother was missing. Again. Of course, Morza was, after all, he seemed to contain more hatred towards captor than Aaden did himself. Running a chilled hand through his hair, not even noticing the frost that had started to form along his fingertips. As much as he loved him, his damned brother was a right fool at times and it was his job to keep him in line. There was a smell that always clung to Morza, one his twin was so used to he didn't seem to know it was there. The faintest smell of a metallic sort. Copper. It followed his brother around as the cold did him, after all, it was their magic types.

Following the smell as faint as it was always led him to Morza, that time was no different. Soon enough he'd found his way towards Kallinicus's main lab, a place that was quite strictly off limits to them unless... other circumstances came about. It didn't take much time to find his brother snooping around Kallinicus's notes, without a voice to make himself known Aaden opted to simply drop the temperature in the room a bit it wasn't hard with the frost that had been inching up his arms since he realized where Morza had gone.

Mod
Morza continued to brush through the notes, taking glances at things that looked promising just to be heavily disappointed by something he didn't need to know. The boy started staking the un-needed papers in a certain pile, the entirety very messy as they unevenly stuck out in places. Morza thought he was perfectly fine, as long as Kallinicus didn't come into the room and catch him there. The outcome always came out- well if only you would know. Clenching his fists in anger, the room suddenly dropped significantly, causing Morza to fresh up and turn slowly over to the entrance of the room. "Aaden," he semi-growled, his eyes slightly narrowing at his twin brother sneaking up on him. The sound of paper ripping suddenly filled the air as Morza accidentally crushed one of Kallinicus' papers in his fist. "Oops," he chuckled, dropping the ball of paper onto the ground as he looked over at Aaden once again. Crossing his arms, he raised an eyebrow. "So. . . you followed me here? Classic."

(Kallinicus kicks down the door, holding a sandal, earape all-star in the background for a split second)

Mod
Plushie (TokyoTeddyBear~) wrote: "(Kallinicus kicks down the door, holding a sandal, earape all-star in the background for a split second)"

((No no, we do not want Kallinicus to come into the room and see Morza in his main lab. Then the- well Kura you know what will happen after that and it'll break my sorry little heart.))

Mod
(IT'LL BE MORE THAN A SANDAL WHIPPING FOR HIM IF KALLINICUS FINDS HIM. FIRST CHILD, WHERE YOU AT. YOU SUPPOSED TO BE DOING YOUR JOB)

Mod
((MORZA DOESN'T GIVE A CRAP ABOUT THE FIRST CHILD. YOU AND I BOTH KNOW THAT THE ONLY THING HE'S AFRAID OF IS KALLINICUS AND HIS TERRIBLE "PUNISHMENT" FOR THIS POOR BABY. IF ANYTHING KALLINICUS IS THE ONE WHO DESERVES A SANDAL TO THE FACE!))

(And when are we going to meet the mysterious Kallinicus?)

Mod
(When his creator decides to get off her lazy and uninspired butt and finish him.. TwT)

Mod
((Should I give you some inspiration? I think Kallinicus' first ever experiment that I showed you in our chat might make for a good start. xD))

Love and Sacrifice (Kura~) wrote: "(When his creator decides to get off her lazy and uninspired butt and finish him.. TwT)"

(I'll make a deal with you, I'll bring Twen back and he can target her. I'll even make sure he takes notice of her.)

Mod
(That'd actually be really helpful, since I was mildly freaking out when you decided to resign your characters and position within the group because Twen had been a essential part in the upcoming plot.)

(I'm really sorry about that. I promise I won't do it again. I will talk to you or Jellybean the next time I feel overwhelmed.)

Mod
(But I don't want Kallinicus to notice her, not just yet anyway. Another character of mine has that wonderful responsibility before Kallinicus' suspicions rise.)

(K, I will repost Twen's profile. Then figure out where to restart her.)

(She has been re-posted. Where do you want me to begin?)

Mod
(The thing is, the plot isn't going to be starting for a bit. Twen's involvement is in the beginning, but her introduction into the plot is gradual due to the events that lead up to it.)

(Do you want me to appear off and on but nothing serious?)