"The always-brilliant London Books are set to roll out their third republication of London-centric writer Simon Blumenfeld. Titled Phineas Kahn: Portrait of an Immigrant, originally published in 1937, the London Books edition appears slated for a 1 October return to print. Martin Knight and John King, through their London Books catalogue, have never let me down, so I’ve got this one marked for purchase.

Phineas Kahn: Portrait of an Immigrant by Simon Blumenfeld

Simon Blumenfeld’s acclaimed second novel follows the struggles of a Jewish merchant’s son, Phineas Kahn, as he makes his escape from the confines of Tsarist Russia to Vienna and then London in 1900, where he settles to raise a large family in the liberating atmosphere but desperate poverty of the East End. Hard-working and wedded to tradition, Phineas never surrenders in his fight to achieve a better life for his wife and children, who along with his great love of music offer solace in the most difficult times. Phineas Kahn: Portrait Of An Immigrant follows Blumenfeld’s ground-breaking debut Jew Boy, and shows the experience of earlier, first-generation migrants.

Based on tales from Blumenfeld’s own family history, and the lives of people he knew while growing up in Whitechapel, Phineas Kahn opens up a window on the sweatshops, slums and synagogues of the area’s Jewish community in the early decades of the 20th century. Not only a fascinating insight into what was a largely hidden world, Phineas Kahn is also a priceless portrayal – wrapped up in a gripping, warm narrative – of a London now vanished. With Jew Boy and Doctor Of The Lost it forms a loose trilogy that captures the shifting culture, politics and expectations of those who made the East End their home. ." 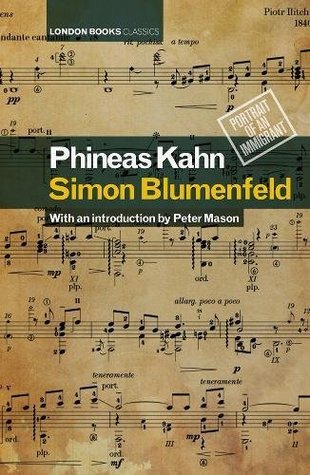 I always look forward to any titles that London Books returns to print, and this one’s sure to be no exception. I picked up London Book’s edition of Blumenfeld’s Doctor Of The Lost while in London in June, and am looking forward to tucking into it.

Simon Blumenfeld, who has died aged 97, was unique in several fields: in revolutionary politics, and as a novelist, playwright and journalist. For more than 40 years, he was a columnist for the Stage and last year, he entered the Guinness Book of Records as the world's oldest columnist.

He remained his own man until the end of his long life, a Jew who was proud of his race but remined aloof from its religion, a confirmed Marxist happy to mingle when necessary with royalty and capitalists, a lover of the fine arts at home with pop stars and champion boxers.

He often hinted that his background was mysterious and that was true. There is some doubt as to whether his forebears were even Jewish; his father's family came from Sicily, where they grew olives until a volcanic eruption destroyed their business. They moved to Bavaria, where they were known as Catholics. His grandfather was a sailor, suspected of being a pirate. His father was born in Izmir, Turkey; his mother came from Odessa in the Ukraine.

Towards the end of the 19th century they came to London and settled in the East End. The family was reasonably prosperous, yet Simon became involved in revolutionary politics, about which he was as uncommunicative as he was about other aspects of his life.

His main ambition was to be a writer, following the example of Israel Zangwill. In his 20s and 30s, he wrote plays, and published four novels, of which the best known was Jew Boy, about the East End; it originally came out in the US as The Iron Garden in 1932, was published in Britain in 1935 and was republished over 50 years later. Simon's 1937 novel, Phineas Kahn, was republished in 1988, with an introduction by Steven Berkoff. Little is known about his plays, except The Battle Of Cable Street, which surfaced at the Edinburgh Festival in 1987.

Simon supported himself in journalism in the 1930s, becoming a correspondent for a French news agency; he also wrote western novels under the name Huck Messer, from the Yiddish term for a carving knife.

Despite his political beliefs, he willingly accepted call-up in the second world war, and was posted to the Royal Army Ordnance Corps in the Midlands, having somehow become an authority on German ammunition.

Then he was transferred to the script department of Stars In Battledress, an army talent show; he supplied it with material, and was stationed in some style in Grosvenor Square. This was his introduction to show business, which he took up after his release.

In the army he met his mentor, South African Norman Kark, who started a publishing business. The titles included Band Wagon, an entertainment magazine printed on exceptionally high quality paper considering the austerity of the era. Blumenfeld wrote for it under several aliases, the best known being Sidney Vauncez, after the Yiddish term for moustache; he had acquired a fine facial growth in the army.

He then went into publishing himself, with a newspaper, Weekly Sporting Review, combining entertainment and sport, particularly boxing, another enthusiasm. The paper came to a sudden end when it was taken to court for libel by the managers of Tommy Steele. By this time, Blumenfeld had made strong freelance connections, including ghostwriting a Sunday newspaper column for nightclub proprietor Harry Meadows, whose Churchill's Club was at the time a fashionable venue.

In the early 1960s, Simon became the light entertainment editor of the Stage. As variety gradually disappeared, Vauncez, as he was by then known, realised that its successor was the thriving club scene, based in the north but gradually moving south. Such was his advocacy of this new entertainment that he gave up writing about theatre and became its acknowledged authority.

He did not give up writing until a few weeks before his death, continuing to contribute a weekly column for the Stage.

His wife, Deborah, predeceased him by 45 years. He is survived by his son, Eric, a doctor, and his daughter, Sheba, a pianist.

You’ll enjoy Jew Boy. Blumenfeld had a real gift for evoking a time and a place in his writing.