"PARRHASIUS, it is said, entered into a pictorial contest with Zeuxis, who represented some grapes, painted so naturally that the birds flew towards the spot where the picture was exhibited. Parrhasius, on the other hand, exhibited a curtain, drawn with such singular truthfulness, that Zeuxis, elated with the judgment which had been passed upon his work by the birds, haughtily demanded that the curtain should be drawn aside to let the picture be seen. Upon finding his mistake, with a great degree of ingenuous candour he admitted that he had been surpassed, for that whereas he himself had only deceived the birds, Parrhasius had deceived him, an artist." - Pliny the Elder, The Natural History (circa 77 CE), Book 35, Chapter 36.

The ability to trompe-l'œil ("deceive the eye" in French) was among the most highly prized artistic skills of Pliny's day, as evidenced by the many tales of Greek and Roman painters who boasted that their works were capable of fooling both man and beast. Although most figurative paintings offer an illusionistic "window" into a false reality to some degree, trompe-l'œil works take such verisimilitude to the level of optical illusion. The technique has been called a "triumph of the gaze over the eye."

Examples of trompe-l'œil come from the Renaissance and Baroque periods (roughly speaking c. 1500 to c. 1700). European culture of this era displayed a strong fascination with the interplay between the beautiful and the hideous, the secret and the visible, and the concept of truth. In the arts, these preoccupations were expressed through masks, stage plays (whose actors often functioned as a metaphor for life in seventeenth-century poetry), and the mask-like, mysterious figures of Mannerist painters, most famously exemplified in the brilliant and vaguely creepy works of Agnolo Bronzino. 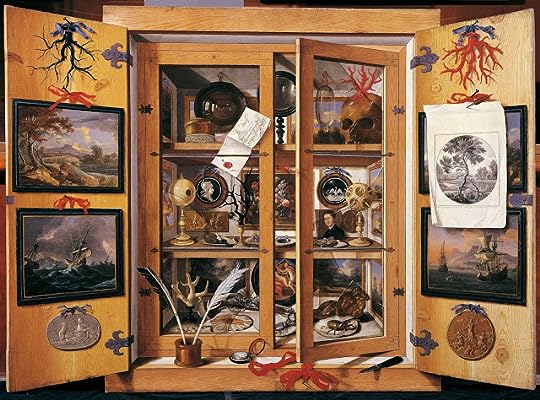 Notice, for instance, the reflection of the mirror in the upper left part of the cabinet, which, much like Jan van Eyck's famous Arnolfini Wedding, reveals the room in which it was painted: 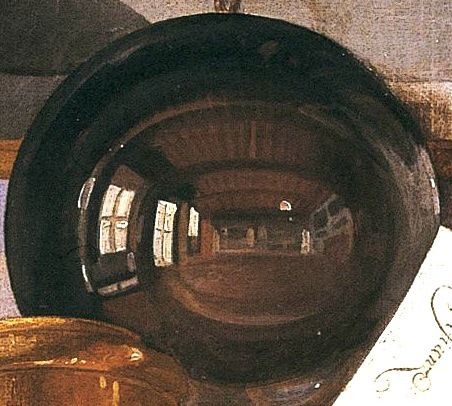 Even as Remps points out the artificial nature of the painting by revealing the site of its creation, however, he also creates the illusion that an actual curiosity cabinet (rather than its mere representation on canvas) stands before us. This photo-realistic effect is achieved by clever touches such as the broken glass on the right hand cabinet window. 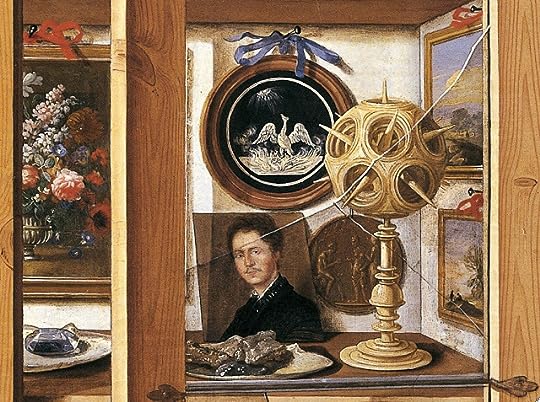 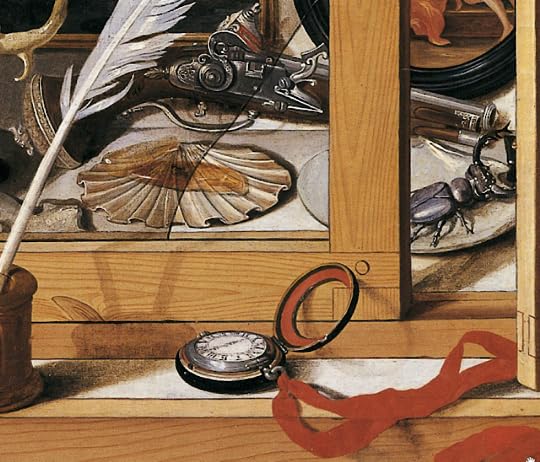 Portraying paintings within a painting, as Remps does here, was an extremely popular approach -- I suppose because it highlighted the painter's skill in multiple genres while also maximizing the visual delight of the viewer by offering several vistas and scenes at once (modern tastes tend to be more minimalist, but the seventeenth century was all about maximalism). The ultimate example of this that I have seen is David Tenier's incredibly over-the-top depiction of Archduke Leopold Wilhem's gallery: 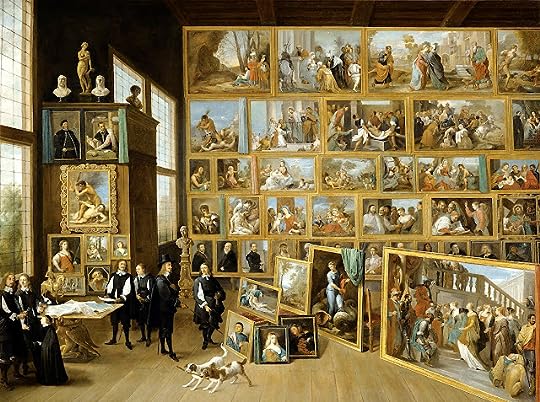 Another typical approach of the period which I find to be in many ways more interesting was that of including written texts in paintings. This technique is actually visible in a surprisingly large number of famous works (for instance, in Hans Holbein's famous portrait of a German merchant). 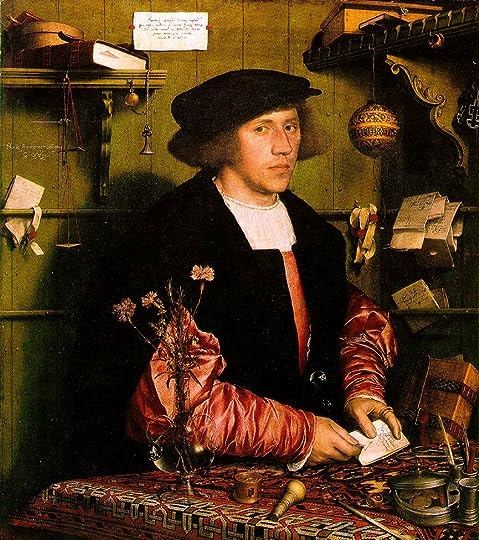 It reached an extreme form, however, in paintings such as the following: 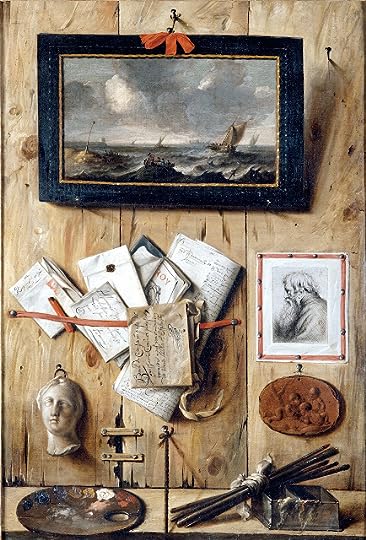 A detail of the texts, which include a letter to the artist, a printed pamphlet and what appears to be an accounting
notebook. 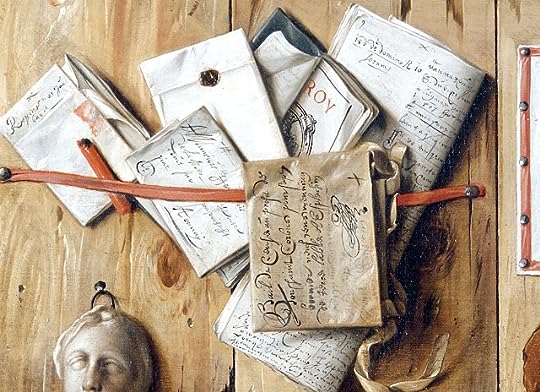 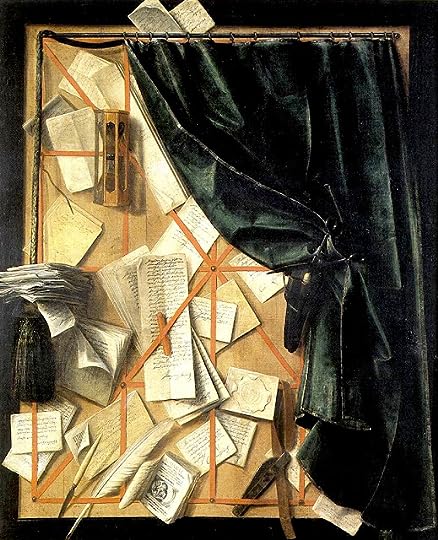 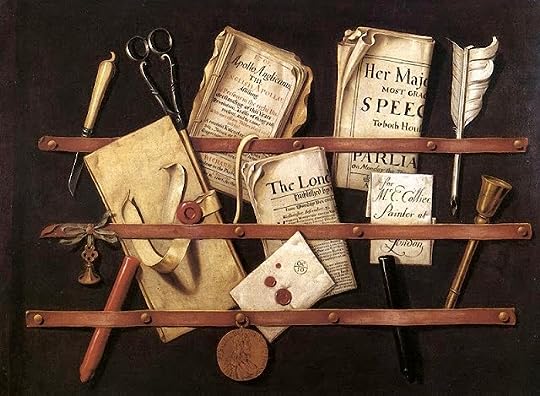 Finally, there is the related style of "quadratura," or painting architectural objects in an illusionistic manner. Perhaps the most famous example of this is Andrea Mantegna's playful and highly original ceiling fresco for the the Ducal Palace in Mantua, Italy. 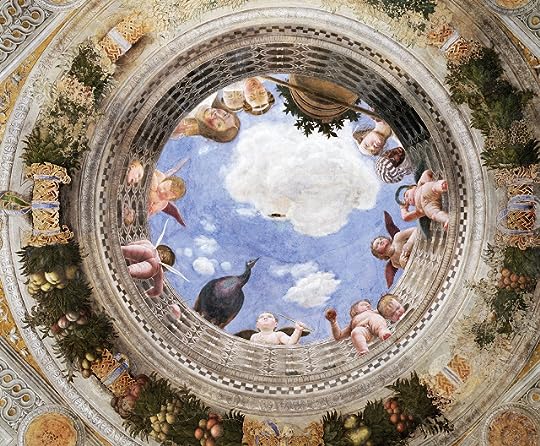 An even more interesting off-shoot is anamorphosis, which employs distorted perspective to create coded images that only become understandable when viewed from the right angle. The most famous example of anamorphosis is to be found in Hans Holbein's The Ambassadors where a strange blur at the bottom of the painting... 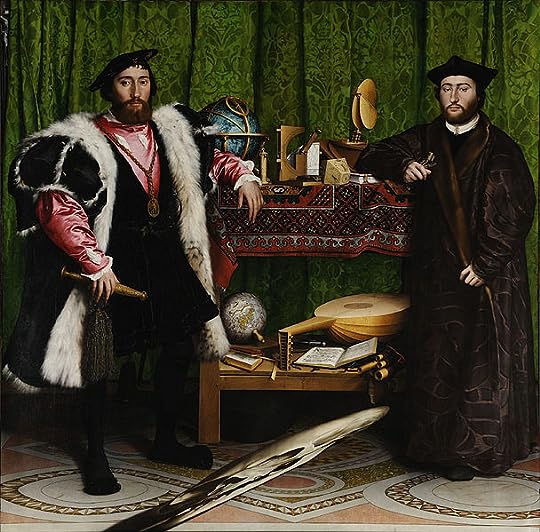 ...revolves into a skull when viewed from the right angle, designed to remind the viewer of the ever-presence of death: 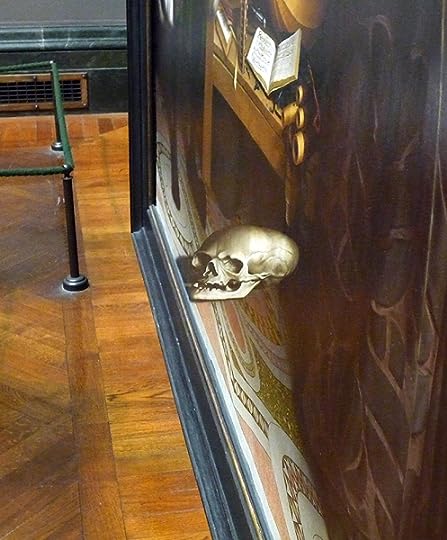