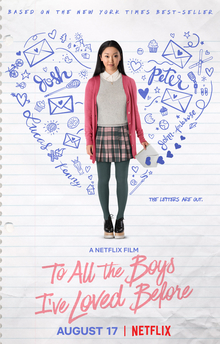 The movie was adorable and fun but it seemed like some things were missing. I wish they added more interactions of Lara Jean and Peter, like the baking scene from the book. That scene made me understand their chemistry. Their interactions from the movie was very fun to watch but it was still lacking, I don't know maybe I am just too attach to the book and just wanted more touching and cutesy scenes between them that weren't in the movie? Who knows I love them together! I really can't wait for the sequel, so I could see what they would do with John Ambrose and and many more from the sequels. Other than that, the story of the movie felt rushed but it was still enjoyable. The acting was fantastic! Humor was great and even if they changed the characters a little, it made me want to watch again and not pause the movie. It is a great cutesy rom-com movie, I would rate it 8/10 stars because they did not try to discredit who the characters are but give their perspective to help the story succeed and show that you should open up yourself to the world rather than be in fear of connecting with others or expressing yourself because you don't want to lose them. It's better to speak than die, or in other words it's better to try, fail or succeed than just not doing it at all and then regretting it later in life. Why fear something than understanding and facing it? There are many reasons why: being rejecting, losing people, getting hurt or not being accepted, etc. But I guess the movie is saying to stop being afraid, stand up and express yourself, be happy and have many experiences because life needs to be experience than just you hiding in your room and not being part of a community. Something like that, I'm sorry about this rant, I love this story and many of these characters :) P.S. What do you think of the movie? Which part was your favorite? Mine was the scene when Christine was discussing to Mr. Covey about his job, It was amusing! :D

I totally agree with you. I love the movie. Its super cute and stuff but there are sooooo many cute scenes in the book that they could put in the movie which would have made the movie even more cuter.. Like that scene during Halloween where Peter gets a jealous that Josh and LJ had couple outfits. Im just toooo obsessed with the book. <3