Reminder to please use spoiler tags where appropriate. Thanks!

Camelot... By the way, has anyone seen the musical? I got to see the Broadway revival on tour, probably 20 years ago, and I still remember the chills.

I saw the film with Vanessa Redgrave many years ago.

Powerful end to the last part. This book has me under it's spell.

Anyone want to remind me how to pronounce Ygraine?

I think Ee graine', like Yvonne. It's how I do, anyway!

Here's a recording of the Welsh pronunciation of Igraine: https://forvo.com/languages/cy/

This is how you pronounce the name of the river Tywy--I never would have guessed it: https://forvo.com/languages/cy/

Hana wrote: "Here's a recording of the Welsh pronunciation of Igraine: https://forvo.com/languages/cy/"

Finished up Camelot this morning and there are several loose ends I'm waiting to be tied up in a nice, neat bow for me. I'm thinking I'm finding this book to be the most compelling of the three; I'm not sure if that's because this part if the legend is more familiar? Hmmm. Not really, as the whole "sword in the stone" and Arthur's birth, etc., are common folk lore. Well, whatever, I'm galloping through it!

I loved the musical, and it's based on one of my favorite books, T.H. White's The Once and Future King.

Although now that I think about it, I've never seen it as a play. My parents had the Julie Andrews cast album and my sibs and I played it so often that, as my dad used to say, the record player needle started playing the other side backward. Now there's a joke my children will not understand.

I'm up to Chapter 3 in which Merlin scouts the potential location for what will become Camelot. Mary Stewart sites Camelot at the ancient hill fort in North Cadbury, Somerset. It's an impressive location. The fortified hill is about 18 acres in size. Here's an aerial view: 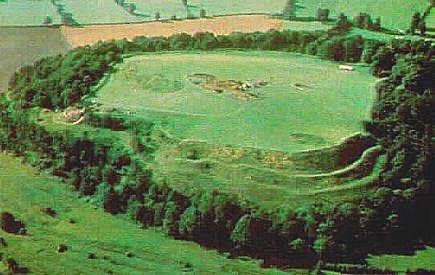 The original Cadbury Castle was a fortified Iron Age site. Excavations have uncovered Neolithic, Bronze and Iron Age artifacts, as well as Roman coins and fragments of armor dating from as late as the 1st Century AD. For Camelot fans the most interesting are items dating from a period of re-fortification in the 5th-6th C, which is the period in which Mary Stewart places her story.

This link has some great photographs and more about the history: http://baronyofnorthcadbury.com/Histo...

You can see how the hill stands above the surrounding countryside: 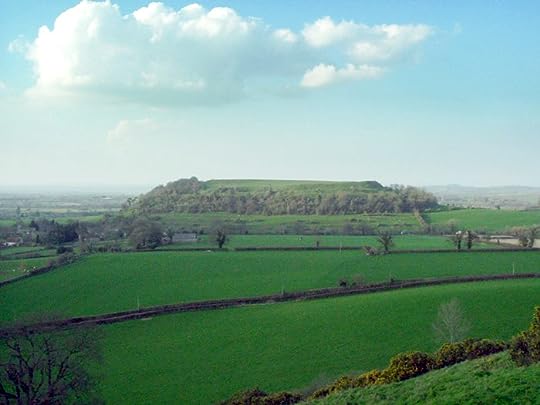 Another great web site with fabulous photographs of Cadbury Castle:

A view from the fortification walls: 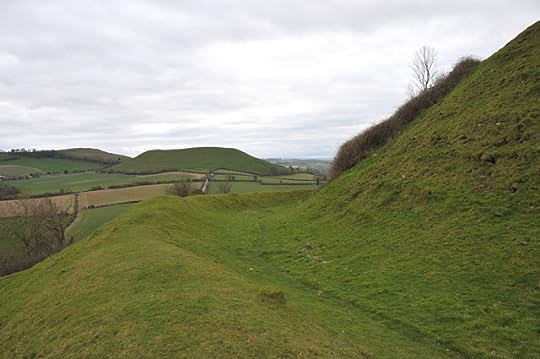 Hana wrote: "Here's a recording of the Welsh pronunciation of Igraine: https://forvo.com/languages/cy/"

Thanks Hana - what a cool site!

It is fun, Carol. Of course sometimes people get into those po-tay-toe, po-TAH-toh discussions--also amusing.

China Court is here! Along with some Thirkells... I know this is the wrong thread, but I'm so excited!

Was anyone else thrown (view spoiler)[ by the appearance of Arthur's first wife in the book. Her name is so similar to Guinevere's! (hide spoiler)]

Absolutely! She throws so many curve balls in this one...

Thanks for the Cadbury pictures--I peeked at them before I started this section and enjoyed being able to picture the site as I read.

(view spoiler)[ That Guenevere thing completely threw me. I kept waiting for some kind of Lancelot danger sign, but Arthur seemed very taken with her and here's Bedwyr who went to pick her up seeming completely happy to hand her over and 100% sure she's perfect for Arthur, so I couldn't figure out how Stewart was going to spin an adultery plot out of that, and then she... didn't. (hide spoiler)]

About Morgan--(view spoiler)[I'm disappointed that she's being played as another power-hungry wicked woman in the Morgause vein. I like Ygraine a lot, and I feel let down about her daughter on her behalf. Plus Arthur could use a like-able sibling. I wonder if the goal is to keep him kind of isolated, with no family but Merlin to rely on. (hide spoiler)]

Karlyne and Carol, that had me thrown off balance, too. She plays with the legend quite a bit.

I think growing up as Arthur did, not having a clue about his parentage, definitely made him independent, not only not needing family relationships but not even being aware of the lack. There's a definite suggestion that Morgause corrupted Morgan at a young age, looking for power, so she was probably not particularly glad to find out that she has a brother who is also her king.

Julie, the women in the book are certainly problematic. But even Merlin, the Misogynist, admits that women have no power over their lives, except such little as they can gain by wile and 'small magic'.

Hana, I'm not sure what to make of this distinction between small magic and--big magic? We know Merlin's a prophet, and a god speaks through him, or that's how he describes it. What's a small magician? Someone who (view spoiler)[ messes around with hallucinogens, which would explain Morgause's attack on Merlin? (hide spoiler)]

Or maybe this is the explanation, from the Dunpeldyr section of the book (and a quote I love): "I had seen someone who might have learned worthily from me. Not as others had wanted to learn, for power or excitement, or for the prosecution of some enmity or private greed; but because he had seen, darkly with a child's eyes, how the gods move with the winds and speak with the sea and sleep in the gentle herbs; and how God himself is the sum of all that is on the face of the lovely earth. Magic is the door through which mortal man may sometimes step, to find the gates in the hollow hills, and let himself through into the halls of that other world."

Maybe the smallness or largeness is ultimately in the magician, not the magic.

Julie wrote: "Maybe the smallness or largeness is ultimately in the magician, not the magic..."

Wow! I love that. I suspect this may be a theme that will run through the whole book.

Sadly, the small vs. 'great' magic framing is probably Merlin being snobbish and misogynistic--which naturally is a very small-minded place to be coming from.

When Merlin is at his best he sees things as in that beautiful quote, Julie, but perhaps he can be blind in other ways.

As a reader I like it that he's limited, though. Makes for a more interesting book.

I finally finished this part and really enjoyed the ending. I have been very slow with this book but mostly because of being very busy and having little time to read. I'm hoping the second half will be faster. Thanks for the beautiful pictures, Hana, and and the websites. I am obsessed with the King Arthur legend. When we went to England a couple of years ago we visited Glastonbury Abbey in Somerset where they purport to have the burial place of King Arthur.

I'm so glad you enjoyed this part. I'm with you for the next part even if it take a while on your busy schedule. I would love to revisit England since I missed most of the best gardens and Arthurian sites!

Bobbie, we're starting a read of The Wicked Day on August 7th. I think it's a first read for most of us, so if you can join us your Arthurian expertise would be very welcome!

Gee, I'd like to but probably will not get this one finished by then. So I will follow with that one whenever I can.

Great pics! Finished this section. Now I am on to the next. Be right back to post and read spoilers. Esp spoilers! WHEEEE!

Hana wrote: "Julie wrote: "Maybe the smallness or largeness is ultimately in the magician, not the magic..."

Wow! I love that. I suspect this may be a theme that will run through the whole book.

I wouldn't call it being misogynistic or small-minded. Merlin thinks of women as practicing spells and potions in their daily lives to influence their immediate circumstances without any greater purpose, but he also understands that they have no power to influence anything but the most insignificant events. That is the world they live in.

I agree with Julie that the paragraph she has quoted explains the difference between small and great magic as Merlin sees it.

I forgot to answer this question so am going back to it. I did see the musical on stage in Houston a number of years ago with Robert Goulet as Arthur and it was quite good but probably not the best production as it was in a smaller venue.

As for the movie, with Richard Harris, it is my absolute favorite musical. I plan to watch it again as soon as I finish this series.

I forgot to answer this question..."

Oh wow Bobbie! I still play the You Tube clip of Goulet singing "If Ever I Would leave You."

I didn't enjoy the movie so much, mainly because I thought Vanessa Redgrave was miscast as Guinevere. Of course, so was Julie Andrews!

I didn’t realize there was a movie with Vanessa Redgrave. Is it called Camelot?

Yes, Camelot. I love it.

Oh. Ok! Off to check you tube!

I forgot to answer this question..."

Oh wow Bobbie! I still play the You Tube clip of Goulet singing "If Ever I Would leave You."

I didn't enjoy the movie so much, mainly because..."

Such a great romantic song!

Guinevere will always be Julie Andrews to me. It might have been miscasting but I was too young to realize that when I first heard my parents' album.

Of course that then ruined the movie for me because Vanessa Redgrave is definitely not Julie Andrews!

The 60s didn't have any obvious Guineveres. It's as though actresses jumped the decade!

Karlyne wrote: "The 60s didn't have any obvious Guineveres. It's as though actresses jumped the decade!"

The hairstyles don't seem all that compatible, for starters!

What? No beehived Guinevere? But the really long hair later on could work, but they were either incredibly skinny (Twiggy) or voluptuous (Gina Lolabrigida) ( wonder if I spelled that right...)

Hana wrote: "Bobbie, we're starting a read of The Wicked Day on August 7th. I think it's a first read for most of us, so if you can join us your Arthurian expertise would be very welcome!"

I think I will be ready for The Wicked Day by the 7th, I am about at the end of The Last Enchantment. Will we have threads?

The Wicked Day (other topics)