The first musical instrument was, of course, the human body with its capability of generating vocal or percussive sounds (singing, whistling, clapping hands). Stones served as early percussion instruments, most likely for the purpose of sending signals rather than for enjoyment. The first hand-made instrument was undoubtedly a bone flute. One was found in a cave and was made about 45.000 to 50.000 years ago by the Neanderthal man. Several instruments are mentioned in the Bible (e.g. the harp, the cythara, the trumpet), and one of the oldest depictions of musical instruments comes from the ancient Egyptian culture.Thus, musical instruments have always been an important companion to all cultures and races. 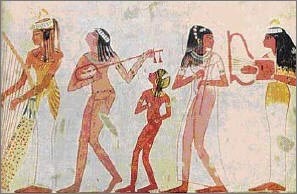 The evolution of crafts and the institution of corporative guilds in the Middle Age spurned further development and refinement of the various kinds of musical instruments. Demand by European courts increased enormously.

Once music had been established as a science (later the "musicology") in the Baroque period, it became necessary to classify all existing instruments. One of the first to provide an extensive overview of the contemporary musical instruments and their practice was the German composer and organist Michael Praetorius (1571–1621). His Syntagma musicum (Wolfenbüttel 1614–1620) in three volumes deals firstly with religious music, its principles and its liturgical contents (tomus primus: Musicae artis analecta 1614–1615). Then, detailed information follows about the instruments themselves (tomus secundus: De organographia, with the pictorial supplement Theatrum instrumentorum, 1618–1619) and lastly a dictionary dealing with contemporary musical forms. The dictionary also provides detailed considerations of purely technical aspects of music such as notation, proportions, solmization, transposition and polychoral writing (tomus tertius: Termini musici, 1618–1619). The importance of Syntagma musicum lies less in its influence on the succeeding generation of composers than in its documentary value. It reflects the extraordinary spread of instrumentation, numerous families of instruments and performance in the early Baroque period.

One of the central figures in the seventeenth century for science and music was the French mathematician, philosopher and music theorist Marin Mersenne (1588–1648). His works combine Renaissance and Baroque ideas summing up the accomplishments of the past. It poses difficult questions for the future inherent in new attitudes of his own time. In his most important work, Harmonie universelle (Paris 1936/37), Mersenne developed both theoretical and practical ideas regarding music and even shows concern about techniques for teaching of children and beginners. His classification of musical instruments (partly indebted to Praetorius) and his extensive presentation of the structures and capabilities of both occidental and oriental instruments then known to him are of great importance to the organology.

The first universally accepted classification of musical instruments was devised by Victor-Charles Mahillon, curator of the instrument museum of the Brussels Conservatory. He compiled a catalogue of the collection which began to appear in 1880. It became the basis of later systems, such as that of the Austrian ethnomusicologist Erich Moritz von Hornbostel (1877–1935) and the German musicologist Curt Sachs (1881–1959). Their new system, first published 1914 as Systematik der Musikinstrumente: ein Versuch, became famous world wide. It was called the 'Hornbostel-Sachs-system' and was the most significant work in the last 200 years and the foundation of the modern organology (in German: "Instrumentenkunde"). The system, which has been continually developed and re-adapted, divides instruments into four main groups according to the manner in which they generate sound.

- Idiophones, which produce sound by vibrating themselves (e.g. the xylophone);

-membranophones, which produce sound by vibrating a membrane (like the drums);

- chordophones, which produce sound by vibrating strings (the viols or the lute);

- aerophones, which produce sound by vibrating columns of air. (the organ or the flute).

I use to listen to some of Praetorius' music: selections from his Terpsichore! - )