4 views
Music > Music in the Time of Vermeer

Music in the Time of Vermeer: Musical Instruments in Vermeer's Paintings & The Development of Music in Europe 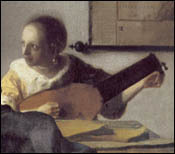 Vermeer and the Musical Instruments

"In the seventeenth century as now, music was an integral part of Dutch culture at all levels of society. In sophisticated circles, intimate musical gatherings were not only a pleasurable means for escaping everyday cares, but a popular and widely accepted vehicle for facilitating social contacts, particularly with members of the opposite sex. Indeed, many seventeenth-century songbooks published for domestic use were exclusively devoted to amorous love songs." Music played a significant role in the daily life of the Netherlands in spite of the restrictions from the Calvinist church. Wealthy burghers loved to display their newly gained life-style in elegant musical companies in which expensive musical instruments played an important part. But the love of music was common to the lower classes as well...

Vermeer depicted instruments in vogue among the upper class: the virginals, the viola da gamba, the lute and above all, the cittern. Musicologist James Melo writes: One looks in vain in his paintings for the boisterous drunkards and peasants that populate the genre paintings of several of his contemporaries. 'It has been remarked that Vermeer painted the very essence of stillness and silence ... Compared with the lively and busy atmosphere of paintings appropriately entitled merry company or a musical gathering, Vermeer's rendering of musical instruments is almost clinical and detached at first sight. ... It is, however, significant that he never painted musical scenes that could be related to the lower classes in the social scale of the time.'

In thirteen of the thirty-six known Vermeer paintings, a remarkable variety of musical instruments are portrayed even though they are not always clearly visible and in some cases they appear as a symbolic prop. But nonetheless, their frequency suggests that they held significant interest for the painter.

Vermeer's prominent characters represent the kind of people who would have known the musical lyrics through Dutch, French, and even English song-books and part-music. The performers who appear in the paintings are members of the haute bourgeoisie, people who read, wrote, and often spoke several languages and who collected European poetry in which the latest love conventions appeared...His paintings in general betray a knowledge of musical instruments and point to his interest in and fascination with the musical scene of his day. 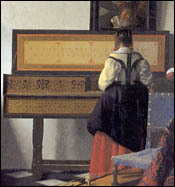 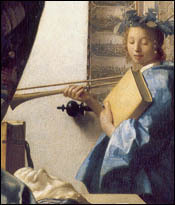 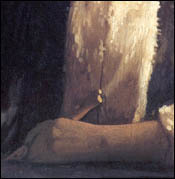 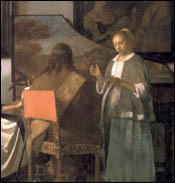 Love Vermeer! Isn't the painting The Concert one of the ones that has been stolen?

Do we know if Vermeer played any instrument? He was sure good at depicting them! And obviously music was a huge part of his life or interests. I wonder if he ever learned to read music or play an instrument himself...

I'm not sure he would have time. Besides, I think, most of the odd little and big things he populates his pictures with are just being used as props. - )

Mark wrote: "I'm not sure he would have time. Besides, I think, most of the odd little and big things he populates his pictures with are just being used as props. - )"

Yes, they are props, but especially for Vermeer, they are so prevalent!

It's like with that red rug he uses all the time. The way he drapes and folds it differently each time he uses it: creating different aspects of texture and sunlight to challenge his skills; or likewise, the crazy maps and pictures he uses on the walls. - )

Mark wrote: "It's like with that red rug he uses all the time. The way he drapes and folds it differently each time he uses it: creating different aspects of texture and sunlight to challenge his skills; or lik..."

I've always been able to distinguish a Vermeer by the use of his maps. Yes, he does use those singular props often. And he is so excellent in the way he uses and paints them!

Mark wrote: "Love Vermeer! Isn't the painting The Concert one of the ones that has been stolen?"

Yes, Mark! Good job! This is what I found:

"One of the paintings, The Concert, was Isabella Stewart Gardner's first major acquisition and one of only 34 known Vermeer works in the world. It is thought to be the most valuable unrecovered stolen painting, with a value estimated at over $200 million." 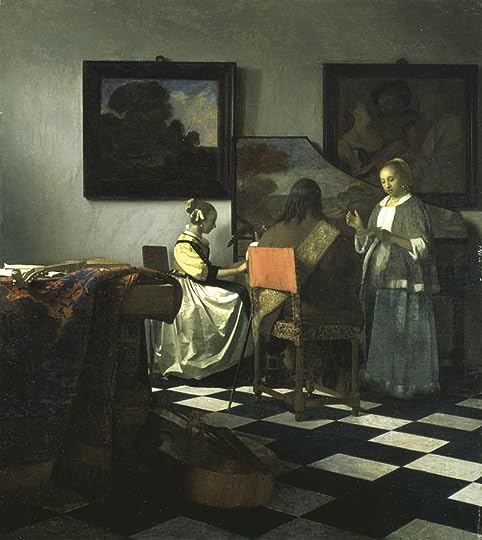 I grew up in the Boston area, and I'm pretty sure I've been through the Gardner, but probably as a young person. Vermeer is my favorite painter these days. Very interesting about it being her first major acquisition. I love the way he paints light!! On the book on the desk; on her sleeve; on her skirt; on the floor; on the other woman's forehead and chest. Really cool! - )