5 views
Art Lovers News Corner > Museum of the Year 2018! Can you guess what it is? (Includes current exhibits) 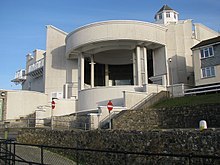 "The Art Fund Museum of the Year award is the biggest museum prize in the world, seeking out innovation and exceptional achievement in museums and galleries across the UK.

This year's five-strong shortlist featured a women's centre, a celebration of our postal system, a Turner Prize host venue and the home of British motoring and aviation but it was Tate St Ives that took home the £100,000 prize."

"Other previous winners include The Hepworth Wakefield (2017), The Whitworth in Manchester (2015) and Yorkshire Sculpture Park (2014)."

Middle-earth in colour: How Tolkien drew his fantasy universe
The author of the most influential fantasy novels ever written, The Hobbit and The Lord of the Rings, also created stunning illustrations of his Middle-earth universe. 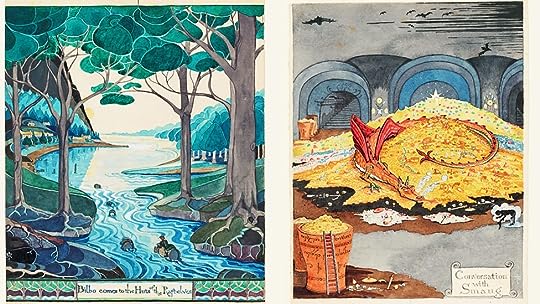 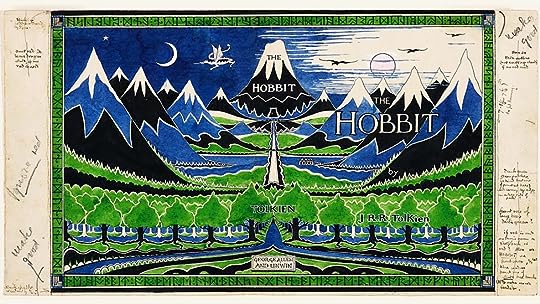 Tolkien's notes can be seen around his design for the dust jacket of The Hobbit. There is also a publisher's note, "Ignore red", to reduce printing costs. © The Tolkien Estate Limited 1937

Monet in the city: A rarely-seen side of the great Impressionist

"New exhibition Monet & Architecture brings together 78 works by one of the world's greatest ever painters, including 19 rarely seen pieces from private collections. 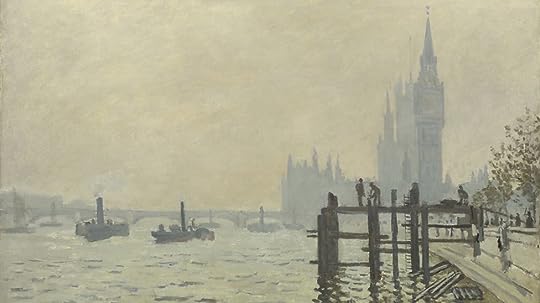 "It’s more than 20 years since the last Monet show in London. Monet & Architecture promises to make up for lost time with 78 paintings from all around the world – 19 from private collections, rarely loaned and rarely shown. This is a rare chance to see some of Monet’s lesser known masterpieces, as well as many of his greatest hits.

But why Monet and Architecture? Isn’t Monet famous as a landscape painter? His garden at Giverny is his most celebrated subject.

Why ignore his water lilies and focus on his cityscapes? Because the father of Impressionism didn’t just paint pretty pictures of wild flowers. His main subject was the manmade. After all, there was nothing natural about Giverny.

Monet made his name painting outdoors – "en plein air" as art critics call it. Painting on the spot, rather than in the studio, gave his paintings their vital, naturalistic style.

"He used architecture to convey his ideas about modernity." But that wasn’t all. He also used buildings as mirrors, to convey the play of light, and as focal points for his pastoral scenes.

"It's deepened my admiration for him as an artist," says Richard Thomson, of curating this show. "He makes objects and forms fit. They have their right weight in a painting, and they interlock, one with the other."

A feast for the eyes: What Picasso's Kitchen reveals about his art

"Food was ever-present in the life and art of Pablo Picasso. From sketches auctioned nightly for supper at Barcelona's Quatre Gats restaurant, home to his first exhibitions, to Cubist still lifes inspired by the cafés and bistros of Paris" 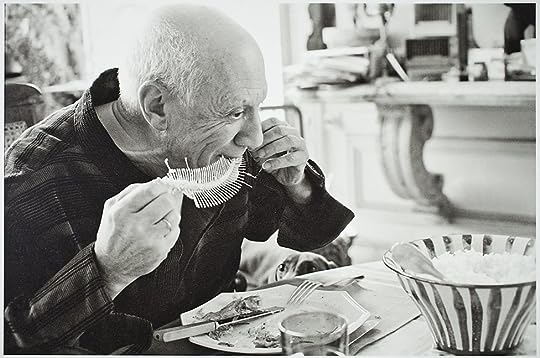 ‘Anybody who creates wants to be like Picasso,’ says Ferran Adrià. ‘He was always disruptive, and that’s what any creative person wants to be.’

"Adrià is renowned as one of the world’s most famous chefs. So what’s he doing here, at the Picasso Museum in Barcelona? He’s here to launch a new show called Picasso’s Kitchen, about Picasso’s lifelong love affair with food...Picasso’s culinary tastes were a lot more down-to-earth. ‘Olga loves cakes and caviar,’ he said of his first wife, Olga Khokhlova. ‘I love Catalan sausage and beans.’ He ate simply throughout his life – fresh fish, a little wine, lots of fruit and veg - no wonder he lived to the grand old age of 91. As this exhibition shows, food was his constant touchstone, in his life and in his art." 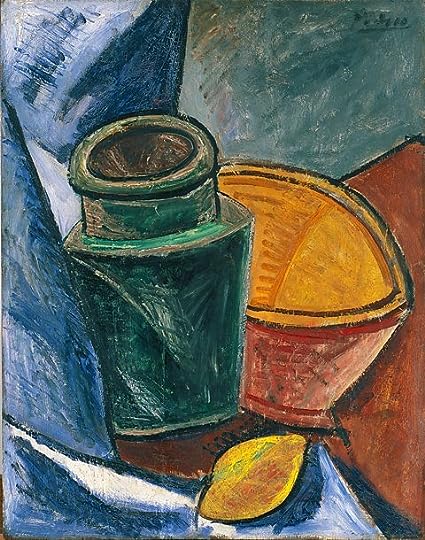 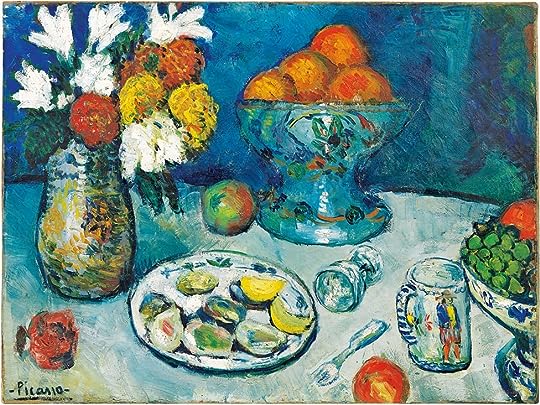 "For Picasso, the kitchen was the centre of the home – a source of warmth and sustenance which stretches right back to prehistory. ‘Man doesn’t change – he keeps his habits,’ he said, of the primitive art that inspired him. ‘Instinctively, all those people found the same corner for their kitchens.’

Picasso’s Kitchen isn’t just about cooking – it’s about eating and drinking, and the first room of this show is devoted to the local restaurant where Picasso mounted his first exhibitions."

El Quatre Gats (The Four Cats) opened in 1897, in an ornate building in the heart of Barcelona’s Barri Gotic (Gothic Quarter). Right from the start it was a lively rendezvous for young artists. It staged readings and recitals. It even had its own literary magazine.

Picasso went to El Quatre Gats virtually every night, to eat and drink and meet other artists. He was never without a pencil and a sketchbook. At the end of the evening he’d auction off his sketches. They usually sold for around one Peseta – about the same price as a bottle of house wine." 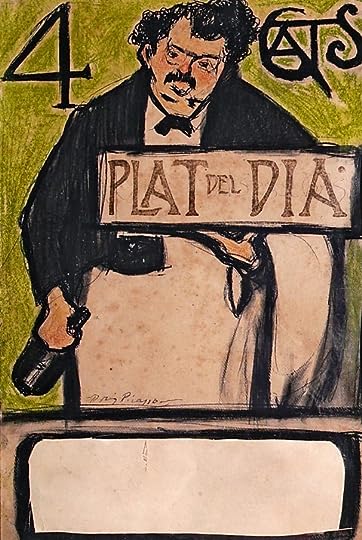 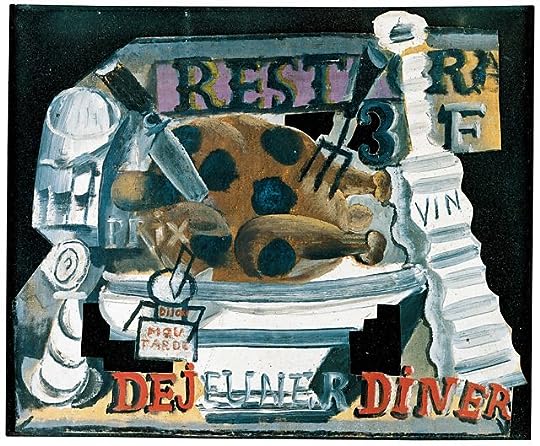 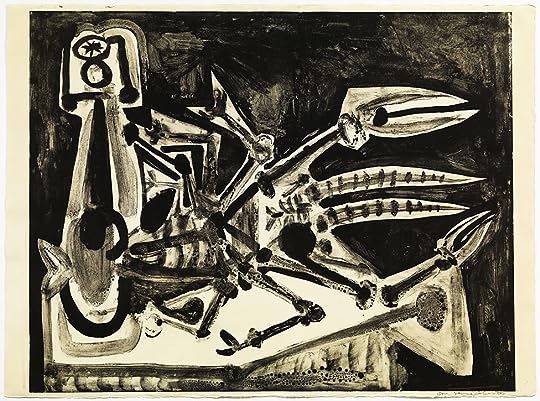 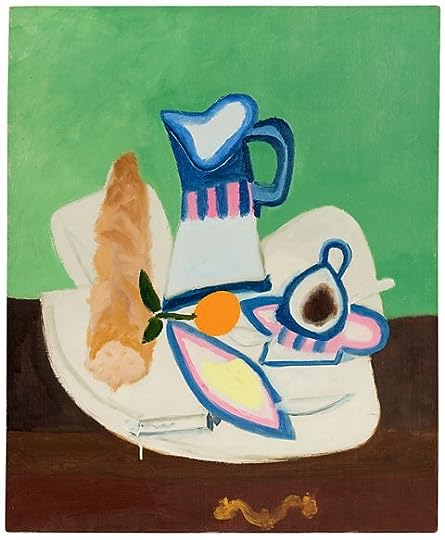 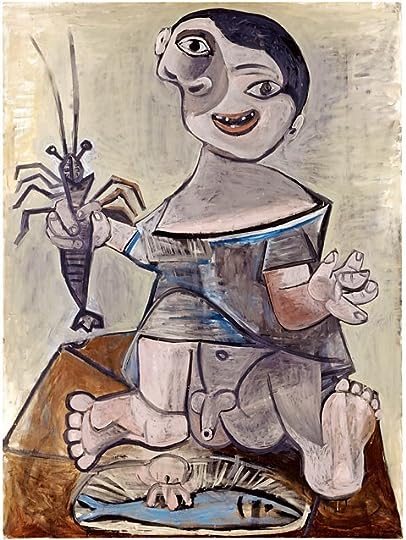 Enigmatic Escher: Early works by the artist like no other

The artistic highlight of Leeuwarden’s year as European Capital of Culture is Escher’s Journey. 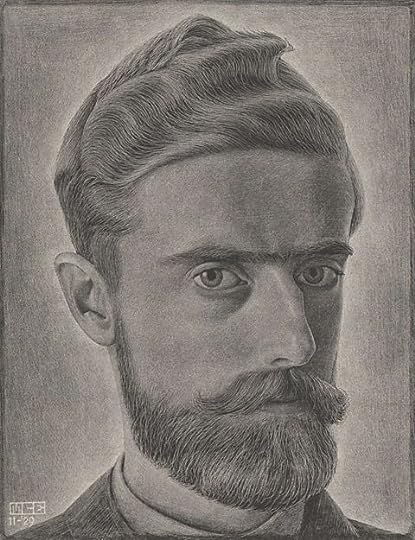 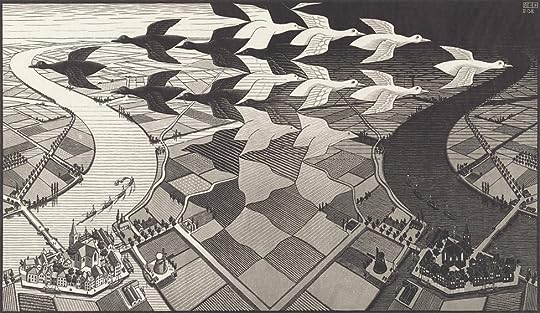 "In a quiet corner of the Netherlands, a pretty patchwork of fields and dykes where cows outnumber people, a quaint little city called Leeuwarden is toasting the return of its most famous son. Maurits Cornelius Escher died in 1972 but his exquisite pictures have outlived him, and now the Museum of Friesland is mounting an exhibition devoted to his enigmatic art.

While conventional artists followed the crowd, he created his own world.

MC Escher was unlike any other artist. Immensely popular with the public yet ignored by the art establishment, his delicate artworks stand outside the canon of 20th Century art. While conventional artists followed the crowd, he created his own world. This exhibition charts its evolution. It feels like stepping through a looking glass, into the landscape of a dream."

..."Dag en Nacht (Day and Night) the Museum of Friesland has just purchased, the first Escher in its collection. Created in 1938, as the storm clouds of the Second World War began to gather, it depicts flying geese morphing into the flat fields of the Polders." 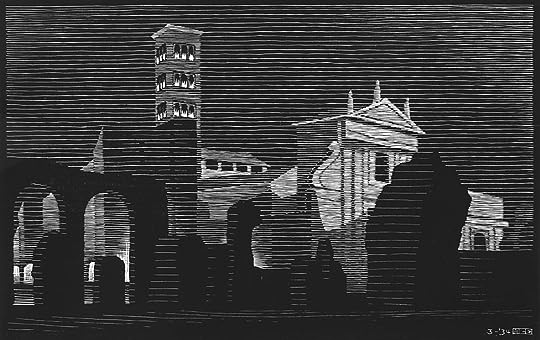 "Despite a kindly and wealthy father who gave him every advantage in life, Escher was a hopeless student. "I was a very stupid boy," he recalled, cheerfully. "Secondary school was sheer misery. The drawing lessons were the only saving grace – not because I could draw particularly well, but because they were my only refuge in a terrible time."

After a disastrous attempt to become an architect ("I was never interested in building houses – unless they were mad houses") he switched to graphic art and finally found his niche." 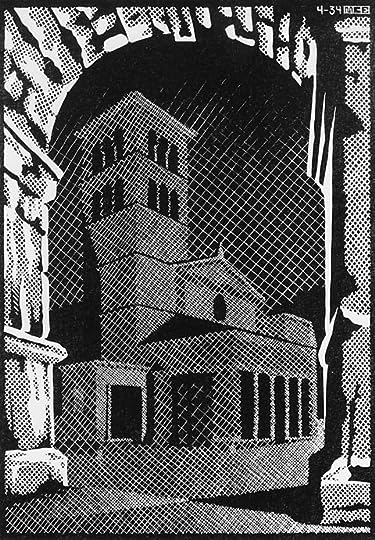 Nocturnal Rome: San Giorgio in Vellabro (seen from the Arch of Giano) (1934)

"At the end of his studies, his parents took him on holiday to Italy. After the muted light and low horizons of his native Netherlands, it was love at first sight. He drew the clifftop houses of Ravello, the medieval skyscapers of San Gimignano, and the Mediterranean shoreline of Amalfi: "the most beautiful coastline in the world".

Supported by his father, Escher stayed on in Italy, and in Ravello he met a Swiss girl called Jetta who became his wife. They moved to Rome together and Escher started to make a living. However the rise of Mussolini prompted them to move back to the Netherlands, shortly before the start of the Second World War." 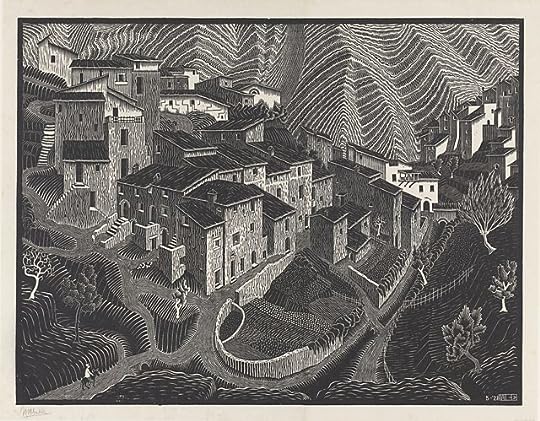 Escher’s Journey shows us that he started out as a traveller, rather than a recluse.

"Escher’s favourite journey was by freighter from Italy to Spain ("I would like nothing better than to sit on a cargo ship for a whole year and watch the waves") and in Andalucia he found his greatest inspiration. He visited the Moorish palace of Alhambra, and drew and redrew its geometric tiles. It was like a mania, an addiction. He found it hard to tear himself away. It was an utterly alien environment, yet it felt like coming home. No wonder his work feels so separate from 20th Century western art.

Escher dismissed his art as a game, but there was more to it than that. "Most people simply don’t understand what it’s all about," he wrote, in a letter to his son, George. "In the end, I no longer belong anywhere." In one way, he was right. The critics and curators never understood him. But although he didn’t belong in the art world, ordinary people embraced him. And his art will live on forever, stuck on the walls of a million student flats."

(All above posts from http://www.bbc.co.uk/programmes/artic...)

Monet in the city: A rarely-seen side of the great Impressionist

"New exhibition Monet & Architecture brings together 78 works by one of the world's greatest ever painters, including 1..."

A feast for the eyes: What Picasso's Kitchen reveals about his art

"Food was ever-present in the life and art of Pablo Picasso. From sketches auctioned nightly for supper at Barcelona'..."