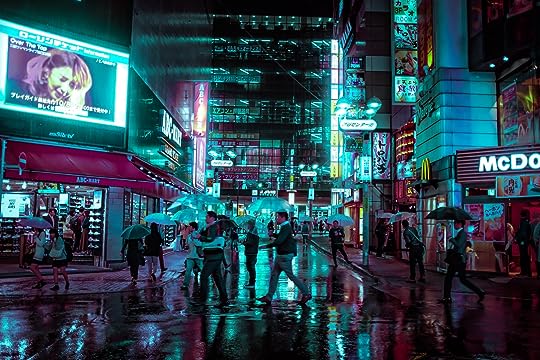 a cyber dystopia ❝ F R E Y H A V E N▾
→ sometimes, for the majority to prosper, a small minority are required to suffer - is what those born within the upper and middle levels of the city are taught. when in reality it's quite the opposite. a social pyramid is what the cyberpunk, heavily technologically advanced freyhaven thrives upon, with the majority at the bottom tiers working tirelessly for those at the very top.

there are three levels to this city, as stated before, and very rarely do those born into these echelons move up (it's actually commonplace for some to move down), those at the lowest are often forced into manual labor. not to mention those that bare light.
(view spoiler)[
the world outside of the city is barren and course, completely stripped of resources and locked in an eternal night after the sun itself disappeared. but there are a select few that can manifest the light itself, generating energy in the palms of their hands. these select few are almost always related genetically, which makes them easier to contain at the lowest tier of society.

the city is on the brink of collapse though, with more and more synths being released and hidden amongst the general public and a growing rebellion on the hands of an authoritarian government, those who've been living their day to day lives in a dreamy haze are beginning to wake up. (hide spoiler)]

tier one ❝ W R E T C H E S▾
→ those born at the bottom of society are treated as such, even by one another. it's a cruel world down there, and though there are laws set in place - rarely are they followed. considering the majority of societal structure is dictated by those with power to suit them, corruption flourishes in these parts.

they have a completely free market, so most of the businesses run within are black market, selling produce that'd be completely illegal on the upper levels, which is why it isn't uncommon for top tiers to occasionally sneak down to sort through the wares. it's every man for himself in the dark.

tier two ❝ B L U E C O L L A R▾
→ not quite at the top but most definitely not at the bottom. moderately educated sheeple is typically what they're labeled as. they work for what they own, most of them being in some form of the workforce. crime is low here, as most people dont have the time nor the energy to commit major crimes, not to mention that the foremen are particularly strict in these parts - keeping just about everyone in line.

there are a select few outside of society that maintain lives here, black market shop owners, inventors and mechanics, the kinds of people that know technology like the back of their hands and aim to free the synths from their technological bindings. people dont typically converse much openly either, a fast paced existence where relationships are sparse. 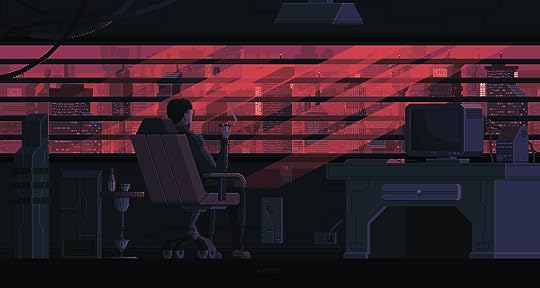 those who live on this level of society are treated to luxury but heavily monitored, doing anything illegal on this tier is nearly impossible unless your hacking skills are up to par with some of the most advanced firewalls in the whole of the city. the richest of the rich (political families) on this tier are often assigned synths of their own to do their bidding. these synths are programmed to come to their beck and call, having lost all sense of agency through the processes that made them who they are now.

society ❝ S T A N D A R D S▾
→ currency comes in the form of credits. credits are used city wide on every level, they are earned through labor and can be transferred from one person to another. credits exist on an individual's identity chip - which is injected into them at birth. those who do not have an identity chip do not exist within government terminals. some leagues of hackers do steal credits from other people, though that's a rare occurrence.

law is most commonly enforced on the top two levels, mainly on the highest tier of the city. it is enforced by the foremen who come in a few different ranks. laws are common sense, but on the highest level those who actively protest the government are immediately reprimanded, free speech does not exist on tier three, and the upper class are often subject to occasional house searches under the guise that they are protecting the citizens from outside threats. foremen are most corrupt on the lowest level - where they openly do as they wish and take advantage of their power to exploit the poor through whichever means that they please.

(view spoiler)[education is compulsory on the top two levels but is the most strict on tier three - where the occupations of the upper class are chosen at puberty based on the aptitude tests they're forced to take. from that point on they attend different schools that train them rigorously for their selected job. if they happen to score highest in physical aptitude however... they're often taken from their families and never heard from again... in the mid tier, education is only compulsory to highschool, which is when most drop off and head into the workforce.

technology plays a major role in freyhaven's society. it's a fast paced existence, with cars that fly and lights of all neon shades, rainwater trickling into the streets painted with multicolored oils. every facet of this world somehow runs on some kind of technology. people are constantly being recorded and watched from every angle, those who can produce light are turned into synths that serve the upper class but doubly so - monitor their every move and send reports to the government.

energy is produced by the light bearers, as their aptly nicknamed. without that energy, the city would cease to function within a matter of days. some parts of the lower level are even beginning to suffer power shortages because synths are being set free. there are some synths who are never reprogrammed to serve a master, because the intensity at which they produce the energy, otherwise known as luster, is incredibly high. and thus they're hooked up to machines and harvested nonstop. those synths are called cattle. cattle synths can communicate with others through servers, though only for small amounts of times - a lot of what they actually say is redacted, which makes their speech limited.

the sun has been gone for as long as anyone can remember. the land outside of the city is barren and public officials speak of monsters in the dark, where the city's lights don't touch. there are barriers set into place on the top two tiers that prevent people from going outside city limits, a light blue in color, they're actual walls - though powered by the core and made out of light energy. there are rumors floating around that tunnels below lead out of the city into different underground regions that are powered by geothermal energy, but no one has any definitive evidence of that.. (hide spoiler)]