Mod
Colin Wilson's fifth novel, NECESSARY DOUBT (1964), is one of his most enjoyable. What starts out as a standard murder mystery, with an elderly professor suspecting a former student of killing several rich men for their money, quickly turns into something quite different: a metaphysical thriller in which there may not have been any murders committed at all, and something even weirder and more disturbing may be going on instead.... Reprinted for the first time in decades, with a new intro by Colin Stanley and vertiginous 60s-inspired cover art by M.S. Corley. 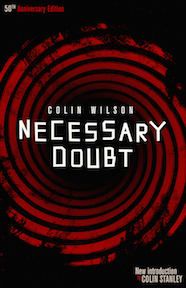 Learn more about the book and author over on our website:

Not what I expected at all! It's just one of those books I'm glad to have had the chance to read.

Cathie wrote: "Not what I expected at all! It's just one of those books I'm glad to have had the chance to read."

Mod
Glad you liked it, Cathie!

I like all of the books that I've read by him. I'm most fond of The Mind Parasites but it's already in print.

I believe we were done with Wilson's titles but now we're (hopefully) working on another surprise. :)

Yes, I own a copy for my collection and future reread.

If a novel is in print, Valancourt would not be able to have its own edition print, considering the addition of a Forward?

Mod
Right. An author/estate/agent will typically only license a title to a single publisher within a country. There are a few exceptions but for the most part we can only reprint a book if it's completely out of print.

Thanks for the explanation!