Here's some thoughts for writers wondering if readers are interested in climate change themes. 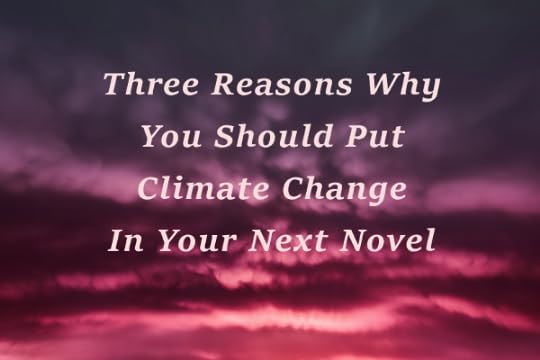 This article is well worth reading.

" Sudbanthad didn't set out to write about climate change. "But when I expanded my narrative into the future," he said, "my imagination of Bangkok decades from now required that I see a far different place than the one I know." The city of his birth, he added, "is measurably sinking. Its depressive topography is exacerbated by subsidence from groundwater use and new buildings that are weighing down the land. Coupled with the fact of rising seas, Bangkok, like so many cities, is under threat." "

Does this make every book about the future a climate change novel?? I think it will if the author wants to create a sense of places for his characters to inhabit. It may not be as expansive as I did in The Big Melt, where I tried to include impacts from higher temperatures, eutrophic lakes, melting asphalt, dying trees, and invasive plants and animals. But everyplace on Earth will be experiencing changes that may be integral to the story plots.

Mod
Sense of place is probably key. Quite a lot of sf, technothriller etc. work is set indoors or inside computer-generated spaces. Characters live in cities and the author may be more concerned about integrating technology like robot cabs - they often complain that the cost of petrol has risen, or about energy shortages. But that could be dependent on many factors, including labour strikes and greedy cartels.

Most dystopians do now include a factor of climate change having caused calamitous changes, whereas in the past, it would generally be a nuclear war or nuclear disaster.

I also think readers want to know what can be done to stop it. That was what motivated me to write and why I set it now (last year to be precise, because that was when I was writing). I used fantasy / myth / science fiction (I blurred the lines a little) in our world, but that aspect was only the catalyst to make us change. Everything in my book could be done and should be. In a strange way we have had a real catalyst, the pandemic. I just hope it creates the right reaction.

Mod
I can recommend A Blizzard of Polar Bears

This is a thriller about a research biologist assessing a Canadian polar bear population.
The concepts of animal populations shrinking and disappearing due to climate change is explained, not just with the north, but on mountains. If people who would not usually read factual books come to terms with the concepts through fiction, they can start to participate in calls for change.