This was my second list book by this author, and I liked it even better than the first, which was also very good (The Kingdom of this World). It is the story of a musician who goes into the Amazon jungle in quest of a primitive musical instrument. He goes there with his mistress since his wife was too busy with her acting career. While there he has a kind of spiritual awakening. He also falls in love with a native woman. He proceeds to abandon the mistress, who is clearly not acclimated to the harsh environment, anyway. He makes a great plan with what he is going to do with his life from this point forward, but not all things go according to plan.

I love Carpentier's writing style and use of language. Hailing from a musical background himself, the book is peppered with a lot of musical analogies and vocabulary. His descriptions are poetic and lyrical. He was, however, a product of his times. The females were weak characters and there was an edge of chauvinism. I felt sorry for all of the women involved with the protagonist for various reasons. The main character wasn't exactly a likable character himself, but I enjoyed his insights and narration. The book mentioned a few locations that I felt compelled to Google. One of those locations is a mountain, called Mount Autana, that he described as looking like a Gothic cathedral. It really does. One you might see in a dystopian novel where nature has taken over. Here it is: 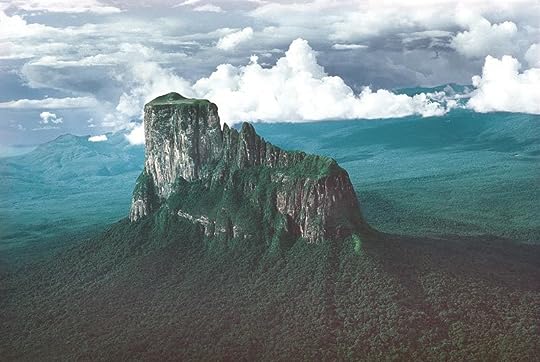 Mod
Read 2011;
This novel was written in 1953 but is really timeless and not dated. It is included in the 1001 Books You Must Read Before You Die in 2008 edition.
Alejo Carpentier was born in Switzerland but grew up in Cuba and is identified as a Cuban author. He was also a musicologist. His writing is a fusion of literary and music themes. He is considered the first practitioner of magical realism, though is his work is more limited to that later developed by Gabriel García Márquez and was not difficult to read. What makes his writing difficult for me was the music. I am not well studied in music and therefore found that looking up a lot of the works really helped me to more fully enjoy Carpentier’s writing. I found it best to be sitting with my I Pad for quick look up of words while reading The Lost Steps. Music is present in his work, lyrical use of colloquial dialects, literary rhythms such as alliteration and assonance and the theme of music within the world of the narrative (drums, footsteps, etc.)are a few examples. The setting is never identified beyond; a large metropolis, a South American city, a South American jungle. It is a narration of a journey through space but also time. The narrator is never named. Most characters are only identified by what they do rather than names. Interestingly, the women are given names, Ruth, his wife, Mouche and Rosario. The narrator has already grown weary with the marriage and has taken a mistress. While on his journey he grows bored with his mistress and takes a native woman as lover. The native woman, Rosario refers to herself as Your Woman and her name becomes replaced with Your Woman. It is written in the style of a diary. The narrator flees mechanized society for the primordial. The narrator is torn between his heart and head. Does he live in society where he can write or stay in the nature where he is timeless, where he is creative? Carpentier references the Book of Genesis, Sisyphus, Don Quixote, Prometheus, Genevieve of Brabant and Deuteronomy. Though the story lacked something about 2/3 of the way in, the richness of the writing has much to be enjoyed. I would recommend this book to anyone wanting to be well read in Latin American literature.

This major work from one of America's most highly regarded authors was an interesting combination of an intellectual's version of The Lost World and Heart of Darkness. Our primary character, fed up with his life in a major north American city as a composer for commercials and movies, sets out at first to pull a bit of a scam and then to actually search for native instruments that would help define the origins of music. Our primary character is unnamed and unlike in The Lost World or in the Heart of Darkness, he does not find an ancient highly evolved civilization or the corrupted manifestations of the colonial world. As he travels up the unnamed river, he goes back in time to the Middle Ages and then preMiddle Ages where he finds men like himself fully evolved to live their lives according to the world they are in. This is not a land of noble savages but men with as complete an understanding or misunderstanding of their world with all its mysteries as our narrator could find in Europe.
The descriptive writing is amazing and wonderful. The musicology is rather difficult to get through if you are not as versed in music as our author. The narration, unfortunately, can become tiresome, primarily as our narrator is a reflection of 1950's women demeaning culture. The author's secondary character play roles that are not fully formed but are stand ins. Our narrator leaves his wife because her career takes her away from him physically and emotionally. His mistress is really just sexual play for him and his new love of his live in the native world is "your woman". The female characters appear to reflect Penelope, Circe and Nausicaa from the Odyssey.
I have read other of Carpentier's work in translation and this stands with Explosion in the Cathedral and Kingdom of this World as being exceptional writing and worth a reread in time.
4 stars

I just finished this one in the last week too. I have nothing to add summary wise, everyone else did a great job on that front.

I found the descriptions of the societies upriver fascinating, but I also found his descriptions of women and their general characterization in the book iffy, as well the amount of the narrative spent on musicology or other drier less interesting tipics than the actual narrative a bit tiresome.

I ended up giving it 3 stars.