It is a truth universally acknowledged that this chapter discussion, and this whole Austen August, was always going to have to begin with that sentence, and that chapter one basically consists of Mrs Bennet annoying the hell out of her husband.

I'm posting this first chapter discussion a little early (it is still 31/07/14), just in case we have any eager people who plan on starting Austen August at midnight or something- I will be either asleep/in work/in a different time zone. So what I might do the entire way through is post the chapter discussion boards a day in advance, just to make sure nobody is left out to the time zones.

So, chapter 1 is basically Austen announcing the event that kicks off the plot of the story- Mr Bingley has bought Netherfield Park, a large estate which obviously means not only are his pockets lined with cash but also that he must, absolutely must be single.

This is only a very short chapter and it is just setting up the story to come, but you get a bit of an insight into the Bennet's marriage and their personalities. You find out that despite 20 years of marriage, Mrs Bennet still doesn't cotton on to Mr Bennet's sarcasm at all and fails to understand when he is genuine or being sarky. Her mission in life? To marry each of her daughters off to wealthy men.

Have I mentioned I love Mr Bennet's sarcasm? Because I really, really do.

Favourite Quote from the chapter:

“You mistake me, my dear. I have a high respect for your nerves. They are my old friends. I have heard you mention them with consideration these twenty years at least” 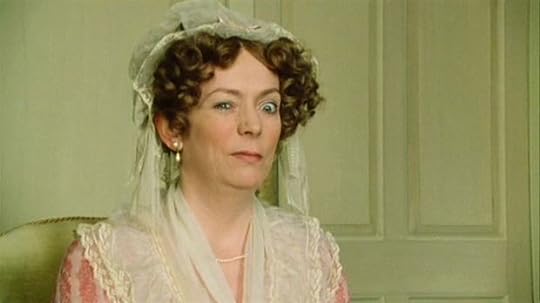 Oh how time has changed, thank goodness! To spend your entire life competing with other neighborhood mothers by marrying them off to the richest men available. It's quite exhausting just thinking about it. I think I shall stick to dogs, thank you. ;)

I find Mrs Bennet a little irritating. She claims Mr B "abuses" his daughters with his low opinions of them & yet Mrs B does the same thing with Lizzy. Mrs B's dramatic personality is already testing MY poor nerves! Hahaha

It's bizarre isn't it! To think that less than 100 years ago, women had hardly earned the right to vote and work to support themselves, prior to that mostly relying on finding a rich husband to support them- well I say "husband", those in the lower classes tended to just live together without marriage...

Mrs Bennet is highly irritating to me, I learnt to find her bearable by paying so much attention to Mr Bennet's sarcasm towards her. My friend pointed this out to me and I've not stopped laughing at her since.

I will observe Mrs. Bennet through her husband. Great advice! Thank your friend for me. ;)

It really does help ;3

I think the idea of marriage being so mandatory bred many ill-matched marriages. Mr. Bennet and Mrs. Bennet are clearly not equals in intellect. Mrs. Bennet is, of course, a silly woman and I love that Jane Austen recognized this sort of mania even 200 years ago.

I know people always say this about Austen, but on this issue especially, she was definitely "ahead of her time"!

I am loving this re-reading. It feels like visiting an old friend. I especially love Mr Bennet's humour. This has always been a book that makes me laugh! I like the way Mr Bennet is always secretly (or not so secretly) riling Mrs Bennet up! Sorry my comment is a bit belated, I am going to try catch up today.

No worries Rebekah! Take your time :) everyone is going at their own pace, my job is just to make sure the two chapter summaries a day are up on time so that they are ready for people!

Mr Bennet and his sarcasm is probably one of the most underrated things in this book, in my opinion!

I LOVED that BBC adaptation - I adored Mr Bennett's sense of humour and I wanted to string Mrs Bennett up!! For any other Austen newbies out there (this is my first Austen novel and also me dipping my toe into the classics!) I did the thing you're not supposed to do and watched the BBC adaptation first (against my will). But I have to say, I'm finding it was super useful in reading the book because I'm understanding the language and pacing more, and I'm following it a lot easier than I did when I tried to read the book without seeing the adaptation!

I don't actually think there is anything wrong with watching the adaptations first, personally. I know it helped me a LOT when I read North and South by Elizabeth Gaskell! Welcome to the read-a-long Rachel!

I love the fact that this book starts the first chapter with some humor. For some books the first chapter is hard to get past! But I was very pleased to see that it started off well. I can already tell that Mrs. Bennett is going to be a very interesting character :)

Wow, I'm late to start (I've just discovered that my mother and I have to move out of the house by the middle of next month, so I've been busy packing for the past two weeks AND preparing for my second year of uni. Goodness it's been insane), but I've finally had a chance to sit down and start my reread. Which is honestly just what I needed. This book is such a comfort to me.
On the topic of watching adaptations first, I absolutely think it's ok to watch a movie or miniseries first. The only reason I read Pride and Prejudice for the first time when I was 11 was because the 2005 Joe Wright adaptation had just come out and, after watching it 5 times in the course of a month, I felt myself compelled to read the book. I would not have understood any of it had I not seen the movie first (I mean... I was 11. I would've had to have been crazy smart to comprehend the majority of the book, especially since I wasn't much of a reader yet.). As it was, I still only understood about 25% of the novel until I went back and reread it the following year.
Anyway, my point (sans the rambling) is that if I hadn't fallen in love with the movie first, I doubt I would be such an avid Austen fan now (or much of a reader). I wish we could get rid of the stigmata that it's bad to not read the book first. It's just plain dumb. There are so many books that have a larger fan base thanks to their film adaptations.
Wow... This got long and isn't even on the topic of the first chapter. I apologize.

No worries about being late or feeling rushed- that is why I've set the whole month as the time to read it in, so everyone has plenty of time and can keep at their own pace!

I agree with that though, while I do try to read the books first, more often than not I'll go and see the films on the cinema just because I don't want to miss them

I finally started my reread :)

I watched the BBC adaptation years before I read the book. I don't think it took anything from my reading experience. it captures Lizzie's wit perfectly, but Austen 's sarcasm surprised me when I first read P&P. it gets a bit lost on film..

As for the chapter, of course the opening line has to be the most quoted of all of Jane Austen 's work. I love it!! And it still holds true nowadays ;)