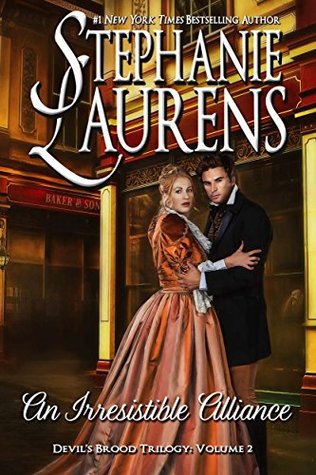 An Irresistible Alliance by Stephanie Laurens

A duke’s second son with no responsibilities and a lady starved of the excitement her soul craves join forces to unravel a deadly, potentially catastrophic threat to the realm - that only continues to grow.

With his older brother’s betrothal announced, Lord Michael Cynster is freed from the pressure of familial expectations. However, the allure of his previous hedonistic pursuits has paled. Then he learns of the mission his brother, Sebastian, and Lady Antonia Rawlings have been assisting with and volunteers to assist by hunting down the hoard of gunpowder now secreted somewhere in London.

Michael sets out to trace the carters who transported the gunpowder from Kent to London. His quest leads him to the Hendon Shipping Company, where he discovers his sole source of information is the only daughter of Jack and Kit Hendon, Miss Cleome Hendon, who although a fetchingly attractive lady, firmly holds the reins of the office in her small hands.

Me! I hadn’t noticed the cover! It looks like they photoshopped Alec Baldwin’s and Zac Efron’s faces together to get the hero...

I had something to do at work yesterday, it needed a little bit of thinking but mostly it was repeating the same thing over and over!

So I ended up listening to 8 hours of the audio (on 1.4x speed).
I've enjoyed it so far.
I'm not sure about the historical accuracy though. What do you think about that? Would you believe a woman in 1850 running a business ? Were there any woman who did such things?

Also about the gunpowder, the whole only 14 people who can move gunpowder and accuracy of records, that sort of things... could that have happened in those years in RL?
(view spoiler)[
In SL books there's always a murder and MCs are trying to figure out who the villain is between a bunch of suspect. In this one there's a villain who is completely unknown.
There's only 4 hours left on the audio and the romance is non-existence! Just a ridiculous kiss!
But So far so good. (hide spoiler)]

What chapter are you on? 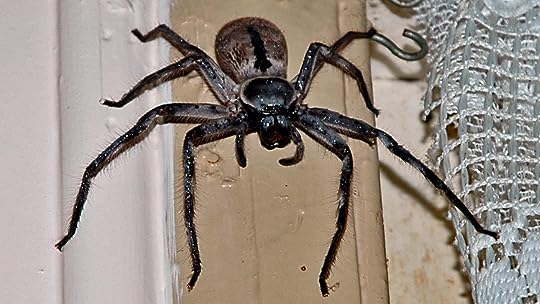 I think women ran businesses back then but there would have been a price. Every time someone goes against what is socially acceptable he or she will face society’s censure. So I can’t buy the fact that Michael didn’t bat an eye at finding that the office manager is not only a woman but one of his social circle. That would have been scandalous and she would most likely been ostracized. One of the things I love about Jessica, the heroine in

, was that she wanted to open a shop. She had weighed the risks and the consequences of a woman of her rank going into trade and made a decision. Here we have the decision with none of the consequences. Also why did Michael spill the beans so quickly? He doesn’t know her, what if she’s a terrible gossip? Her curiosity is normal, his actually answering... Why didn’t he say that he wasn’t at liberty to discuss the contents of the barrels?

Gisela wrote: "Why didn’t he say that he wasn’t at liberty to discuss the contents of the barrels? "

That's exactly what I thought! She asked and he answered!!! I actually said WHAT aloud! lol
A lot of things doesn't make sense in this one. It's like if you are of Ton you're automatically authorized to know the details of the mission!

Tom is such a font of information of London’s streets why don’t they consult him on the best order to visit the addresses?

Uh, where did that kiss come from? No chemistry whatsoever.

I don’t think things were as progressive as Michael says... Goodness this book is boring!

I was kinda of OK with the whole boring side of the book, I was going for 2.5-stars up until that brainstorming session they all had! OMG how boring and ridiculous was that! The way they got to the right conclusions out of thin air... They didn't know the dead guys name but they knew he was 36. They knew the master mind was old.
I think this was the most ridiculous SL book I've ever read and I've read a few!

I thought it was too repetitive. I agree that the brainstorming session at the end was completely unbelievable. Which reminds me, Michael has known Cleo a week (maybe?), presents her to his parents, and their reaction is "Welcome to the family"?! I would have a heart attack if my son did something like that.

Gisela wrote: "I thought it was too repetitive. I agree that the brainstorming session at the end was completely unbelievable. Which reminds me, Michael has known Cleo a week (maybe?), presents her to his parents..."

They are Cynsters, they are cool with anything as long as their sons are getting married!

I’m abandoning this ship, you’re on your own for the next one. Although I do want to know who the baddie is. Maybe I’ll read the last chapter...

Gisela wrote: "I’m abandoning this ship, you’re on your own for the next one. Although I do want to know who the baddie is. Maybe I’ll read the last chapter..."

Yeah! I thought you would :D
I don't think I'll read it anytime soon though!