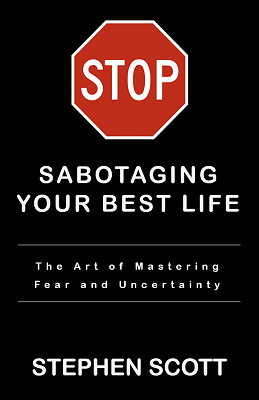 That said, the cover feels flat and unresolved. The harsh red/white on black feels off-putting, not engaging. You attract my attention, but you aren't necessarily pulling me inside. Perhaps a photo of a stop sign, with some sort of duotone color treatment (preserving the red)? Tricky to keep it connected to the remainder of the title, but ultimately more engaging without sacrificing the "pop" you have here now.

Typographically, I would discourage the letterspacing and wide leading of the subheading. It can work with text in all caps, but not lowercase letters. And I'm undecided about the separator lines… I see why you put them there to help contain and group the title (solving my "stop" concern mentioned above), but I wish they were not needed.

And if this were a cover I was designing, I'd probably set your name a bit smaller than the title… but that depends entirely on how important your name is for your audience—are they buying your book because you wrote it, or because of the subject?

Always good to think about your readers needs—after you attract their attention, where do you take them next?

Mod
Hi Stephen! Thanks for posting.

It's not a bad cover, but I'm agreeing with Paul on many of his points.

My biggest issue is the lack of cohesiveness of the full title with the use of the stop sign. My first impression was: "Stop!" Then, "Sabotaging Your Best Life." Two separate things. You really want the main title to hang together as a single concept. I like Paul's idea of incorporating a stop sign photo. Then, you could run the title words together.

Thanks Paul! Great feedback and definitely on point. I actually considered your suggestions and struggled with the right direction to take. I like the idea of incorporating a stop sign photo as well. Again, thanks for your feedback ... much appreciated!
Stephen

It's not a bad cover, but I'm agreeing with Paul on many of his points.

My biggest issue is the lack of cohesiveness of the full title with the use of the stop sig..."

Agreed ... thanks for the feedback!