note: This topic has been closed to new comments.
16 views
Organiser > Create a character contest

Name: Darius Wolfhart
Appearance:
Right eye is orange and the left eye is blue when it’s Darius. Dari’s eyes are blue and Radek’s eyes are orange. They change depending on who is in control. Pale skin. A few burn marks on his back, arms and legs. Black hair that is short in the front where it hangs in his face just passed eye level. It is longer in the back, it hangs to the base of his neck. Usually wears dark long sleeve undershirts and black jeans. He will also wear a T-shirt over it.

Darius’ parents died when he was young. At that time he didn’t know how to control his pyrokinetic power. He ended up combusting into flames that soon spread throughout the house. By the time emergency services showed up, his parents were already dead. He was barely alive. With him being a Deviant, the hospital couldn’t take him because they wouldn’t know what to do with him so they sent him to the Facility where he was treated by Shiro. This was when Shiro was still developing his serum. Shiro treated Darius’ burns in an unusual way. He injected liquid hydrogen into the bloodstream. Sure any average human being could die from this but with it being the coldest substance known on earth, it was suitable for countering the pyrokinesis. Although it did put Darius through some trauma with the constant procedure and testing. At the end of it all, it didn’t counter anything. Darius woke in the testing room to find that one of his eyes had turned a shade of light blue, and that he was not the only one harboring his body. At first things between Dari and Radek were a bit shaky, but they patched things up over the years and got use to it.
Age: 19 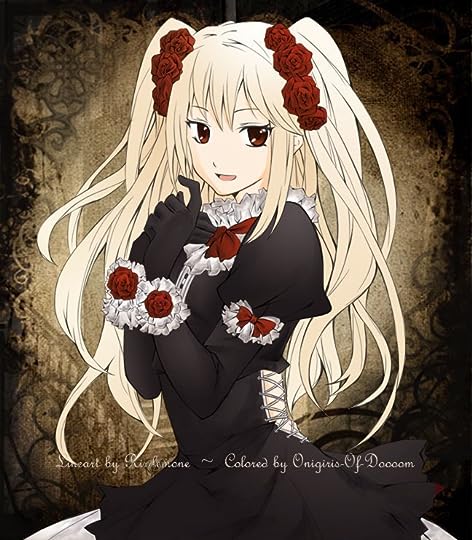 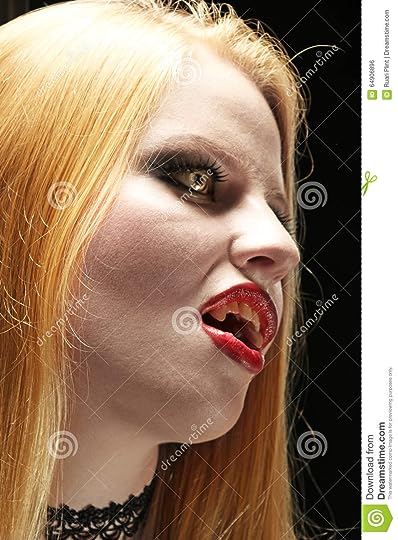 Starla had blonde hair that reaches the middle of her back and red eyes, she's 5'5 and usually wears black, usually dresses.
History: Starla was born in the forest of Illinois. Growing up she had few friends to help her when she was sad. Her parents where abusive which made her isolate herself from people and put her into severe depression, the thought of hopelessness. She had managed to survive for 16 years before running away, right into his hands. The cold vampire who's name was Markus. He had caught her hiding out near his territory. He had thought about murdering her for it but decided against it, so he decided to watch her, look over her. Slowly he fell in love with the blonde and decided it would be best to make her a vampire as well after seeing her sufferings. He had taken the chance at night when she was asleep and turned her.
At first, Starla was horrified at her transformation she had thought it was a pure nightmare, but shortly she grew fond, it was a new chance to start over and when she found Markus, the one who made it possible, she thanked him. Ever since her rebirth, she had been living with Markus, learning about her powers.
Age: Unknown, she looks 16

Hiruko wrote: "Name: Darius Wolfhart
Appearance:
Right eye is orange and the left eye is blue when it’s Darius. Dari’s eyes are blue and Radek’s eyes are orange. They change depending on who is in control. Pale s..."

Sylveon~Raven wrote: "Hiruko wrote: "Name: Darius Wolfhart
Appearance:
Right eye is orange and the left eye is blue when it’s Darius. Dari’s eyes are blue and Radek’s eyes are orange. They change depending on who is in ..."

Thanks! You're is cool too!

Thanks. Wonder who will win :P

Mod
Name: Scar (Last name is unknown)
Appearance: http://moziru.com/images/drawn-scar-a... (Link because I honestly don't know how to put a picture in)

History: When she was little she had an alcoholic mother and a drug abuser for a father. She grew up not know how to care for her sisters or her youngest brother. She was the oldest of the six. She never went to school but she learned still learned how to do things. After a few years, her mother went to rehab but her father started to abuse Scar. Scar had PTSD and depression from all that has happened. So she invited one of her friends over that she met randomly sometime years before. She had a life and a gun with only one bullet. She shot her father in the head with the gun and cut her other family members open. So, her siblings didn't have to deal with the pain. Scar tried to murder her friend but she had escaped, as a result of not finding her she burned down the house and came out with 3rd-degree burns on her face and arms. Now she is on the hunt to murder her friend so there is no witness. But, now she has the cops on her and is hiding as well as searching.

My Dark-Hunter Character:
A Brief Profile

Bastet is 5'1" with marble like porcelain skin, Silver dusted Onyx hair that flows in soft mellifluous waves to her lower back and cascades around her Heart shaped face that was blessed with a well-shaped nose and slightly full blushing lips that set off her deep Emerald eyes. She’s gone from almost too thin to a slender muscular built of a dancer that woke a new grace in her along with physical training that’s required of all Dark-Hunters. The only signs of her training are shown on her elegant petite hands and feet that are lightly callused which can easily be concealed. She is often seen wearing black skinny jeans that’s worn with a peasant like shirt of the same color which is often adorn with black and sapphire bodice. She’ll then round out her attire with a leather jacket with a slightly faded panther whose eyes glow emerald and black boots that is also her Dark-Hunter attire. She has the Dark-Hunter mark, a double bow with arrow on her neck near the collar bone. Her Dark-Hunter attire is a leather jacket with a panther on the back, black skinny jeans, silk long or short sleeve peasant like shirt (color varies with her mood), and a tight black and silver bodice with thigh high boots

History: Unknown to Bastet, she is the love child of the Egyptian goddess Bastet, who made the ultimate sacrifice to protect her child from her enemies. Entrusting the child to a dear a faithful friend to raise among the mortal world. Her adoptive mother took her gladly as her own child had died in its birth. The child who was named Bastet after her true mother was raised by loving adoptive parents who kept this secret close to their hearts. Bastet grew into a beautiful child with traits of both of her mothers. It wasn’t until her high school years that things began to change for her during a failed attempt on her life. But the details are sketchy do to the interference of the goddess Bastet. As time went on Bastet developed into an extraordinary lady. Beauty, intellect, and a fierceness that helped her become successful and engaged to the love of her life. It wasn’t until that very day of her wedding. The day she lost everything. As she stood to take her vows tragedy took place. Before anyone could react, it was a massacre. Every life was taken…. Even though she fought to protect those she loved. As she laid dying a woman appeared to her, the goddess Artemis, with the promise of vengeance. In receiving this ultimate vengeance, she would become a member of Artemis’s Dark-Hunters to protect the mortal world from danger. It only took moments for Bastet to accept and begin her journey as a Dark-Hunter. Now years later she is still answering the call to help those in need, taking icy pleasure in taking down the enemy. She doesn't know that she's a demi-goddess, daughter of Bastet. Even though she is gifted with powers she will often use them as a last resort. Since becoming a Dark-Hunter her doormat gifts awoke along with the gifts received. Such as: Clairaudience- The ability to aurally perceive words or sounds origination on the spiritual plane but also can hear sounds of low/high frequencies not able to be heard by people. The strength of this gift depends on how concentrated empathy is that has this gift. Chronokinesis- The ability to manipulate time only if she has the precise time and place. Farsight- The ability to see the events or possible events of the past, present, and future though Precognition and Clairvoyance. Which is the ability to perceive events before or have already happened in known or unknown places in vague or clear dreams when sleeping or daydreams. Shape-shifting: She can change into most felines or in a puma form. She also has the gifts of a goddess because she’s at least part goddess. When fight the enemy her skills are Hand-to-Hand combat along with skills in these weapons: Atlantean Dagger: A dagger with short wavy etching-covered blade from hilt to point. The only blade that can kill a Charonte demon (god killers). Katana: Japanese single edged longsword. Shuriken: Throwing stars. Srad: A circular dagger that’s a Celtic blade. Also, two double barrel shot guns.

Age: She was 24 when she became a Dark-Hunter

Name: Nadtesha
Appearance: Fair skin, black hair with ginger streak, blue eyes, coral lips, blue top with orange, red and pink patterns, blue skirt with orange, pink and red patterns. Light blue trainers, scales-like tattoo up her left arm, red necklace and earrings.
History: Participated in swimming competition since 15 years and won all. Her father ran a fun game show. She got her competitive personality from her father. Her mother is a olympic swimmer. She got her love of swimming from her mother. Nadtesia became a strong swimmer and competed in many tv show competition such as: total wipeout and ninja warrior.
Age: 17