20 views
What are your favorite incarnations of the X-Men?

Mod
What are your favorite incarnations of the X-Men from the comics, novels, TV shows and/or movies?

I gotta go with that classic lineup once Kitty Pryde joined the X-Men.

Byrne and Claremont were like Lennon and McCartney, after they split, the music was never as good.

Also, I kind of like the Roy Thomas /Neal Adams run which was an attempt to save the book from cancellation. 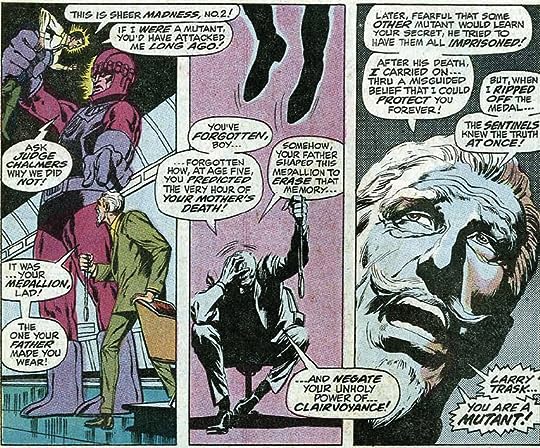 My experience with X-Men extends only to the movies. I really like Hugh Jackman as Wolverine, Patrick Stewart as Professor X, and Ian McKellen as Magneto. And I don't know if Deadpool counts as X-Men, but Ryan Reynolds is perfect in that role.

Also, Logan was Jackman's greatest Wolverine performance, and now I seriously doubt the Old Man Logan graphic novel will live up to the standards of the film.

Chris wrote: "Also, Logan was Jackman's greatest Wolverine performance, and now I seriously doubt the Old Man Logan graphic novel will live up to the standards of the film. "

Old Man Logan has nothing in common with Logan the movie. They are two completely separate entities.

Chad wrote: "Chris wrote: "Also, Logan was Jackman's greatest Wolverine performance, and now I seriously doubt the Old Man Logan graphic novel will live up to the standards of the film. "

I'm actually relieved about that, I wouldn't want a cloud hanging over the graphic novel since I saw the movie first. If they're totally different then I can enjoy it regardless (if it's any good, that is).

Chris wrote: "I'm actuality relieved about that, I wouldn't want a cloud hanging over the graphic novel since I saw the movie first. If they're totally different then I can enjoy it regardless (if it's any good, that is). ."

It's really good. It's set 20 or 30 years in an alternate future where villains have taken over the U.S. Logan goes on a road trip with Hawkeye to deliver a package which allows you to see most of the future world. There's a lot more to it than that but I don't want to ruin it for you.

I don't know if I could honestly state my favorite X-Men lineup. I mean, there have been so many good ones, you know! But two of my favorites are:

New X-Men (the kid version set at the school, not the renaming of the X-Men one), including:
Surge
Prodigy
Elixir
Dust
Hellion
Wither
Anole
Armor
Blindfold
Pixie
The Cuckoos
(and later)
X-23 (who is my all-time favorite superhero ever, BTW)

And also, I'm really loving the All-New X-Men comic, although I didn't really think I would. Its lineup consists of the original X-Men team:
Cyclops
Angel
Beast
Iceman
Jean Grey
plus
Kitty Pride

I really didn't think I'd like it because I never really cared much for OTX (original team X-Men, lol), but just the way Brian Michael Bendis wrote the younger versions is just something special. Plus, later, X-23 joins the group, so that's a huge bonus. But, for the record, I liked the series before Laura joined, it just got 10x better once she was on it.

Dominick wrote: "Just wanted to chime in, as I, too, am a huge fan of Laura Kinney. Glad to see her mentioned with as much fannish respect as possible! From one Laura fan to another, I doff my hat to thee! :)"

Yes!! I'm glad I'm not the only one! I fangirled her from the start! I accidentally stumbled across Innocence Lost a couple years after it was published and I adored it so much I read everything else she was in (which at that point, was very little). And shortly after, they announced they were doing a series starring her and I was so excited! And I love the new Wolverine storyline they're doing with her now! I'm sad old Wolvie had to go for them to attempt it, but I think no one else could come even close to replacing him.

Dominick wrote: "Okay, so for me, the one that is closest to my heart would be Claremont-Byrne-Austin incarnation, as it is the one that really turned my world around. John Byrne's pencils, with Terry Austin's inks, were phenomenal! And Chris Claremont? Aw, man, dude was on fire then! The team would be good for a while going forward, but it would be this good ever again!"

This was a little before my time, but you're talking about the original reboot of the X-Men, right? When they brought in Storm, Colossus, Wolverine, etc? I haven't read a lot of those, but I've read some. That's when a lot of the really weird, dark storylines were going on, like Days of Future Past and the Dark Phoenix Saga, right?

Dominick wrote: "I could not agree with you more! I hated reading all the whiny li'l "non-forward-thinking" fanboys complain about the new Wolverine being a female. Boohoohoo, boys! For all intents and purposes, she was his daughter, and therefore, the most logically qualified to assume the mantle."

Yes! Exactly! I feel that way about a lot of the new characters. Somebody's always complaining about one of them and I just roll my eyes when I hear it. Change is a natural progression for comics. They'll either get on board or be left behind. ;P

"And by "new Wolverine story", were you referring to "Old Woman Laura"? Is it good, then? I may check it out when it wraps up and goes on sale over on Comixology."

No, I was just talking about the All-New Wolverine series generally, I haven't read that one yet. Do you think it's true that they're doing it to be an end to the series now that Logan is back?

Mod
Jolinda - I think Marvel is ending All-New Wolverine because Logan-Wolverine is coming back but also because they’re launching a new #1 with a new creative team:

Since I honestly spent more time (and money) playing the X-Men arcade game then I ever spent reading X-Men comics, my favorite incarnation will always be Wolverine, Cyclops, Storm, Colossus, Nightcrawler, and Dazzler.

Mike wrote: "Jolinda - I think Marvel is ending All-New Wolverine because Logan-Wolverine is coming back but also because they’re launching a new #1 with a new creative team:

Yeah, but I think it's more the opposite. They're getting a new creative team because they're bringing back Logan. It's okay, though. As long as they keep doing Laura comics, I don't really care what name they do them under. :) And I do really like Logan too, so, YAY! he's coming back!