58 views
Music Lovers Corner > What is the most enjoyable music memoir that you have read?

For me it was Al Kooper's Backstage Passes and Backstabbing Bastards (2008). https://www.goodreads.com/book/show/2...

It was great because it started out with him as a songwriter (This Diamond Ring) that was one of the first hits I heard on the radio. Then he covers his recording career ( e.g. Blues Project and Blood Sweat and Tears) including his involvement in the creation of the "Dylan Sound" and much more. Next he becomes an A & R guy looking to sign acts like Lynnard Skinner.

In the process he tells tales about Dylan, Stills, Bloomfield, SRV, Hendrix and many more musicians that he encountered during his career.

This book was a lot of fun. Anybody else have some music memoirs or books that they really enjoyed?

"Get in the Van" by Henry Rollins. The story of his time with Black Flag.

Derek wrote: ""Get in the Van" by Henry Rollins. The story of his time with Black Flag."

I havwn't read that but I bet it would be very good. https://www.goodreads.com/book/show/8...

“The Big Midweek: Life Inside The Fall” by Steve Hanley is well worth reading, even if you’re not a fan of The Fall. I also live Miles Davis and Charles Mingus’s autobiographies.

reply | flag
message 5: by [deleted user] (new)
Apr 08, 2019 07:37PM
I love rock memoirs and autobiographies.
I have read:
The Heroin Diaries: A Year In The Life Of A Shattered Rock Star
Slash
It's So Easy: And Other Lies
Tattoos & Tequila: To Hell and Back with One of Rock's Most Notorious Frontmen

And I have more a want to read!

McKagan's It's is So easy was really good. I enjoyed Springsteen's Born to Run Autobiography as well. He can write lyrics and prose.

Seymour Stein's book was fantastic. Also, Donald Fagen's. Those are just some I have read recently. Couldn't say what was best. 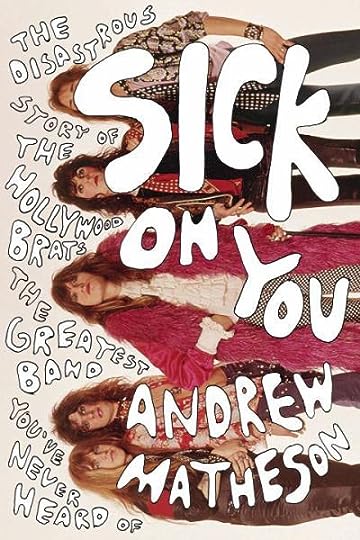 I haven’t got to read many yet but What Does This Button Do?: An Autobiography by Bruce Dickinson earned a 5 star rating from me.

Not a memoir as such, but ‘Astral Weeks’ by Ryan Walsh is exceptional.

Have to go with Bernstein's Joy of Music, partly autobiography...his ear so good, he listened to jazz and notated whole solos. I've notated Birdtalk, a few measures--once in Dorset, UK, I notated 72 measures of Euro Blackbird talk. Took me an hour in Weymouth, near the Jordan Hill Roman ruins.
There's an archive on Bernstein and Copland's letters and intimate relationship that someone bought...and buried.

When I saw from the first time in MTV Awards Hunter Hays and he sings the song "Invisible". A song very powerful for me. Because talks about bullying. After that day I listen every song of Hunter. He is an inspiration from me. His songs help me alot in my dark times

Here is one that is quick and fascinating. Daniel Lanois's Soul Mining: A Musical Life.

He is just a gifted DIY guy who has lived a good story.

It's been a while since I read it,but former Spice Girl,Geri Haliwell's book "If Only" is one I really enjoyed.

Oh, and David Lee Roth's is hilarious. He has so little self-awareness.