What is Life without books discussion

note: This topic has been closed to new comments.
7 views
Archive 2018 > Calling all witches: Your career in magic is just beginning. Grab chapters 1-10 FREE

Read the first 10 chapters of a never-before-published witch urban fantasy serial this May! Two points of view, too many hot guys to count, and more magic than you can handle. Plus, enter to win a $20 amazon gift card. Contest ends July 16, 2018. 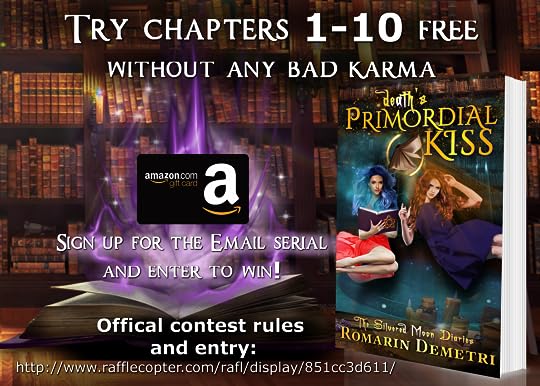 In a world where everyone wants to see you fail, it’ll be a bloody day in hell before you give up. Helaine would gladly skip university if it meant joining the London Coven, but because of her prestigious family, no one in the city wants to watch her gain rights to protect them for ten years. A firecracker by nature, Helaine’s desire to succeed is fueled by proving others wrong. Can she stand up for herself at auditions and win the title of coven witch out from under both her sister and her magic-wielding ex-boyfriend?

Sometimes when there’s no place for you in the world, you have to make your own. Unhuman, Rose has felt like an alien her whole life. The coven can give her a sense of identity, but when powers go awry, untamable passion can be even more dangerous than a witch hunter. Rose’s magical abilities are dependent on lust and desire, and also on the help of her mentor, whose talent intimidates her just as much as the tension between them does. However, does being a prophesied witch unlike any other mean that she doesn’t have a match and is destined to be alone to save the world?

When martial artists Helaine and Rose compete against each other for a place as an initiate on the London Coven, they realize the dangers of conspiracy when one of their peers is murdered. Now, with someone burning through witches, the coven’s newest initiate member must put aside her guilt and perfect her powerful, yet unpredictable elemental magic to save her fellow witches, or she could lose her career, loved ones, or her mortality.

Take me to Death's Primordial Kiss for free

Mod
Thanks! It sounds good.

Patricia wrote: "Thanks! It sounds good."
You're welcome, Patricia! I hope you enjoy it. It was so much fun to write!

What is Life without books