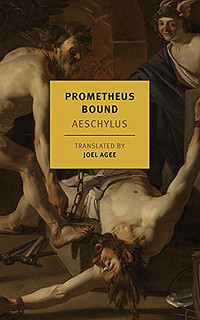 Prometheus Bound is the starkest and strangest of the classic Greek tragedies, a play in which god and man are presented as radically, indeed irreconcilably, at odds. The play begins with the shock of hammer blows as the Titan Prometheus is shackled to a rock in the Caucasus where day after day an eagle will return to devour his liver. This is his punishment not only for the gift of fire to humankind but for thwarting Zeus’s decision to exterminate the human race. Prometheus’s pain is unceasing, but he regrets nothing and, invited to reconcile with Zeus, he only reaffirms his commitment to humanity, to whom he has brought not only fire but the knowledge of writing, mathematics, medicine, and architecture, among other things. He hints too that he knows how Zeus will be brought low in the future, but when Hermes comes as Zeus’s emissary to demand that Prometheus divulge his secret, he refuses and is sent spinning into the abyss by a divine thunderbolt.

To whom does humanity owe thanks and allegiance: to the creator god or to the rebel Titans? Does our knowledge and very existence reflect a flaw woven into the fabric of being? What law controls the cosmos? Prometheus Bound, one of the great poetic achievements of the ancient world, appears here in a splendid new translation by Joel Agee that does full justice to the harsh and keening music of the original Greek.

I'm a sucker for a cover like that. Is that Caravaggio? 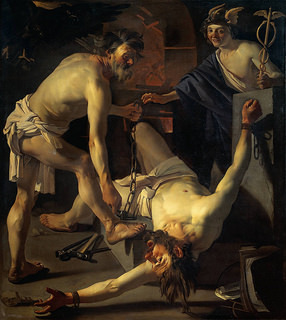