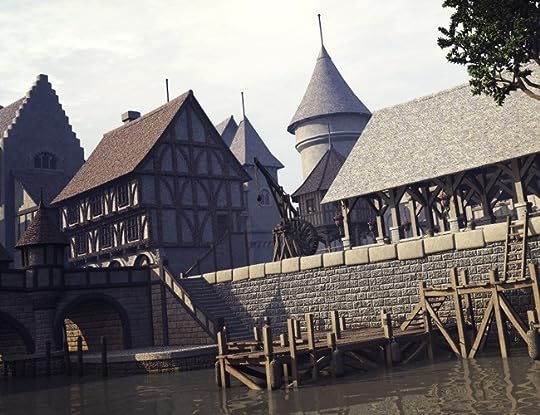 The dock stretched before her: silent, wooden and calming. One would not think it possible for a dock to be calming, but for Cyra the silence, only disturbed by the soft waves of the sea, gave her comfort. It calmed her mood, which needed a lot of calming lately. As a good student she never had any problems with her work, handing in assignments and spending her free time writing poetry, but in the last few months more people of her past emerged, making her uneasy. They thought she could not see them, the thought alone made her laugh – as they underestimated her completely. She might be 'out of the business' at the moment, nevertheless, her skills were still as sharp as ever.
The reason why Cyra strolled around the dock at four o'clock in the morning was a handwritten letter being pushed under her door last night. Normally it would not have piqued her interest, but the message and the shaky handwriting was off. Further, she could not help but be curious, she never had been a chicken. Leaving her to stroll the docks some more, thinking up rhymes, waiting for said somebody….

(ha, I do find the irony very amusing)

After having waited long enough for Cyra to come up with two poems and the exact number of poets who died of drowning, she saw someone run towards her. She looked the woman up and down in one movement, red hair, plain dress like a servants and muddy eyes with a glint. This was the person who sent her the note? Was it… possible?

“What are you sorry for exactly?“ she asked a tad bit snippedly, she was not a mean person per se, but she needed to be sure to speaking to the right person. “Calling me out here in the middle of the night? Leaving me waiting for you? Or better yet: choosing a very well-known location so everybody is able to spot us?”

"I'm sorry because I-I'm in trouble..." She said as a shiver ran down her spine. She was a mess, her cheeks flushed, dress messy and hair windswept. "I was hoping you would help me." She said quietly as she looked at Cyra.

Shaking her head, Cyra looked to the sky, muttered, ”Why me.” to the sky and turned to the woman again. Thinking. She always had a soft spot for people asking for help, seems like it never vanished.
“Fine, ... ” she answered after she pondered her brain long enough, coming up with too many reasons not to do what she was planning to do to accept them, ”But first, let us get out of clear sight.”

Carwen almost collapsed to her knees in relief and thanks. She swallowed and nodded. She would do anything for this woman to help her. "Thank you so much." She said and her shoulders slumped knowing she had gotten help. "Where do you suggest?" Carwen asked quietly, prepared to go along with anything.

Cyra draped the cape back over her head again, ”We can stay on the docks, but let us wander over there to the section where the forest touches the water. There is enough blackness to swallow us whole at this early hour.”
Setting one foot in front of the other, she expected her to follow. Out of the corner of her eyes, she noticed the other woman's nervousness by the shakiness of her fingers. She looked ready to fall on her feet, curiosity has always gotten the better of her. Just like it does this time, she thought.

She breathes out a shaky breath and followed her quickly. Her gaze darted around the area and she moved close to the girl. A shiver ran down her spine as she raked a small hand through her long hair.

Like a well painted shadow did she stick to Cyra, never once leaving her alone. If Cyra had not know it was her, she would not have hesitated striking out, using her skills – somebody's presence right behind her always made her feel uneasy.
Having reached the shadows of the docks, she abruptly turned around, confronting the young lady. ”Spill. What do you need me for?” She never was one for being timid, being bold was one of her major character traits.

((What should she be in trouble for? I don't know what?))

(huh. being followed? an evil landlord?)

She looked at her with wide eyes. "You work at the castle right?" She asked her breaths coming fast even talking about it.

How should she best explain her situation... ”Well. I do not work there precisely, but you can say I .. pay my services there. Why? What have you heard?”

"You need to get me a job, please! I'm begging you." She said with wide eyes. Her lip trembled at the thought of going back to the manor.

Cyra's eyebrows shot up to her hairline, ”A job?” She repeated. ”THAT's what you wanted to talk to me about? A job?!”
Sighing, she thought, I always get the easy ones, don't I.

”What job could I possible get you? I am nothing more than a simple scholar, I do not have much saying in things. Much to my dismay.”

"It's not just a job it's going to save my life. I need anything, can you write a letter of application? Please?" She begged and tears gathered in her eyes.

Was this woman seriously going to cry in front of her? Not good. She searched her brain for a possible solution, finding only... blankness. Writing a letter of application - what for? She didn't look like she was a defender, that was out. A library assistant? No. The only thing suitable was being a maiden, god knows the castle needed them like one may needed clothes, but she did not want her to go through the horror of being treated like garbage, she looked fragile enough. Whom did she know who would –
Before she even thought further, she had to know where she stood, ”What is your name and why would it save your life? Who is threathening you?!”

"My name is Carwen Sine. I'm beaten and almost raped every single day by my Landlord! I'm a maiden and that's the only job I need." She nods and looked at her in desperation. She was nearly kneeling and begging for one of the simplest and worst jobs known to women. "Please!"

Thousand scenarios ran through her head at the moment, stories of women telling her the same line over and over again. Why could men NOT be assholes for once? Why did especially landlords have to be dirty scumbags?! She was angry beyond reach, nobody deserved to be treated like this. Everybody was a normal human being!
Cyra was not sure whether she admired me the woman for still continuing her job, or pity her for not asking for help sooner. She opted for the first one.

”Hello Carwen, I am Cyra. I will try to give you a job as a maiden if that is what you wish to be. Although it might not be in the castle,... my connections there are limited. Is there a way to contact you when I have found something?”

She nods and smiled slightly. "There is a dock house down there just leave the message in the flowers. Thank you." She said in relief. "Thank you so much."

In the flowers. How original. She could not stop her mind of being sarcastic, after all, she was made of honesty.
"Okay. I will do as you say, but you certainy have heard that I have a price, have you not?" Cyra was not thinking about money, she could get away with stealing some, however being a well-known philosophy scholar she earned quite well with giving tutoring lessons. Even the higher folk wanted to learn about poetry, haikus and poets. some even wanted private lessons, which she always declined as she knew what these private lessons included. One of the reasons why she did not like her landlord from the start, should she force her to give her his name or would that be too cruel?

"A price?" Carwen squeaked as she said it, she bit her lip again. "What is it?" She asked, scared to hear what she would say. Her already shaky hands delved into her hair as she watched the woman. She had no money, nothing that could be of use to her. So what in heaven's name could this lady want from her?

Carwen looked ready to drop dead of nervousity, Cyra mentally checked herself - she did not look THAT scary after all. Sure, she had short hair and dark features, but it did not make her a criminal. Well, technically she was one ... oh forget it she thought, that thought is not going to get me anywhere.
she grunted, "You look like I would demand to slice out your liver, Carwen. I wont hurt you. Just give me the name of your landlord and we are even."

"Oh, okay. William Howard." She said his name so quietly it would be a miracle if Cyra even heard what she said. She shivered slightly again but her frantic flickering gaze slowly started to calm some. The queasiness in her stomach slowly starting to disappear. She didn't question the woman on why she wanted to know, she didn't care, as long as she escaped the manor.

William Howard?...Hm. somehow she was familiar with this name, but she could not put her finger on where she knew it from. Not bothering with her client anymore, she said, "Thank you. I will take... care of your issue and leave a note if I hear anything." Standing here in the open, without real cover aside from the shadows made twitchy. unknown rustling always made her uneasy. Even if those days laid way behind her, she had to help her. After all, she DID know what the woman was talking about. Thinking about her philosophic streak, and her upcoming task, she quickly grabbed her coat and hurried on. Cyra didnt want to be seen with someone at the dock from some town people.

Carwen stood in the darkness for a bit. She started at the ground and pulled her grey hood over her bright hair. She rubbed at her waist where the latest bruise was. She took a deep breath then began walking to the one place she never wanted to return to.