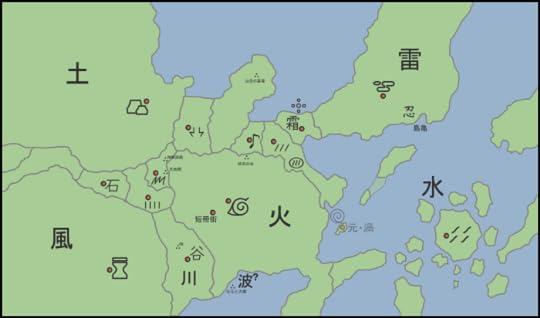 Countries operate as separate political entities and are presumably all monarchies, ruled by daimyō who stand equally in rank with the Hidden Villages' Kage . The Naruto world is similar to feudal Japan in many aspects; those countries maintain balance between themselves through nothing but power. Treaties are periodically signed, but they are generally not worth much more than the paper they are written on.

The Land of Fire (火の国, Hi no Kuni) is one of the largest and most powerful countries in the series, and the home of the main characters of the series. Its government leader is the Fire Daimyō. The Land of Fire was the first country to adopt a ninja village, Konohagakure, a custom other countries would soon adopt. The Land of Fire is appropriately oriented towards the element of fire, typically having very bright and warm weather. While not the physically largest country, it has the largest hidden village.

The Land of Fire has been involved in wars with the Land of Lightning, the Land of Earth, and the Land of Wind. In the quiet years that followed, the Land of Fire slowly recovered, and became accustomed to peace. This was seen by other countries, who had been working to increase their military power, as a weakness, and is one of the factors that brought about the invasion of Konoha by Otogakure and Sunagakure.

On the border between the Land of Fire and the Land of Sound sits the Valley of the End, a large rift formed shortly after the founding of Konohagakure by the First Hokage and Madara Uchiha.

Konohagakure (木ノ葉隠れの里, Konohagakure no Sato; English TV "Village Hidden in the Leaves" or "Hidden Leaf Village"; Literally meaning "Village Hidden by Tree Leaves") is the hidden village of the Land of Fire and was founded by Hashirama Senju and Madara Uchiha. As the village of one of the Five Great Shinobi Countries, Konohagakure has a Kage as its leader known as the Hokage, who resides in the Hokage Residence. There have been five official Hokage, the most recent being Tsunade. On a mountain overlooking the village from the north exists the Hokage Monument which has the faces of all those who have taken the office of Hokage engraved on it

The Land of Earth (土の国, Tsuchi no Kuni) has seen little attention in the series thus far. It is located north-west of the Land of Fire. Its government leader is the Earth Daimyō. The country is mostly comprised of desolate, rocky areas. The border of the Land of Earth runs along a rocky mountain range, blocking communication with other countries. The wind blowing from the north passes over these mountains, carrying small rocks from the Land of Earth to the surrounding countries. This famous natural phenomenon is called "Rock Rain" (岩雨, Gan'u).

The "Rock Rice Cake" (岩餅, Iwa Mochi; English TV "Rock Mochi") is a regional specialty of the Land of Earth. The crispy texture of the rice cakes is said to be irresistible.

Iwagakure (岩隠れの里, Iwagakure no Sato; English TV "Hidden Stone Village"; Literally meaning "Village Hidden by Rocks") is the hidden village of the Land of Earth. As one of the Five Great Shinobi Countries, Iwagakure has a Kage as its leader known as the Tsuchikage, current being Ōnoki. Iwagakure is well-known for the rock-hard attitude of its shinobi; as soon as the Tsuchikage gives an order, the Iwa-nin do so without hesitation, even if it means death.

The Land of Lightning (雷の国, Kaminari no Kuni) is located on a peninsula north-east of the Land of Fire and is one of the Five Great Shinobi Countries. Its government leader is the Lightning Daimyō. In the centre of the country are vast mountain ranges, whose many thunderstorms are said to give the country its name. From these mountain ranges, many rivers flow to the sea, creating a very crooked coastline that displays an impressive oceanic beauty. There are many hot springs located within the country.

Kumogakure (雲隠れの里, Kumogakure no Sato; Literally meaning "Village Hidden by Clouds") is the hidden village of the Land of Lightning and was founded by the First Raikage. As one of the Five Great Shinobi Countries, Kumogakure has a Kage as its leader known as the Raikage. Thus far there have been four Raikage, the most recent being A. The village is located in a range of tall mountains, and is literally hidden in the clouds. The Raikage works in a large blue structure built into the tallest mountain.

The Land of Wind (風の国, Kaze no Kuni) is one of the more prominent countries in the series. It is located to the south-west of the Land of Fire and borders the Land of Rivers and Amegakure. Its government leader is the Wind Daimyō. The country covers a vast realm, but that realm is largely composed of deserts. Because there is very little rainfall throughout the year, the people of the country live in villages built on one of the desert's many oases. Despite the country's extremely harsh environment, it has a large population. Although they have warred with each other in the past, the Land of Wind is on good terms with the Land of Fire, with a great deal of trade going on between the two countries.

The "Sand Dumpling" (砂団子, Suna Dango; English TV "Sand Dango") is a regional speciality of the Land of Wind. A unique characteristic of the Sand Dumpling is the soy flour, which is prepared especially to resemble sand. They apparently taste very good.

Sunagakure (砂隠れの里, Sunagakure no Sato; Literally meaning "Village Hidden by Sand") is the hidden village of the Land of Wind and was founded by the First Kazekage. As one of the Five Great Shinobi Countries, Sunagakure has a Kage as its leader known as the Kazekage, who resides in a spherical structure in the centre of the village. There have been five Kazekage, the most recent being Gaara.The Puppet Technique, and from their performance in the Fourth Shinobi World War, the Cloth Binding Technique seem to be common techniques among Sunagakure ninja. Shinobi from this village believe that the accomplishment of a mission predominates the lives of the ninja trying to accomplish it. As such, they are known to be ruthless in battle, meaning to them that failure is not an option. Should failure seem inevitable, a Suna shinobi would almost surely try to make a success of their mission in some way or another as seen when Kankurō secretly retrieved from a piece of Sasori's clothing as a means to track Akatsuki to their hideout. Most shinobi from this village seem to have an affinity for Wind Release.

The Land of Water (水の国, Mizu no Kuni) is composed of many islands, with each having its own unique traditions. The country's weather is typically cool and the islands are usually covered by mist. The islands themselves also feature many lakes. In some places, like the area where Haku grew up, it is very cold and snows quite a bit. The nation is oriented towards the element of water. Its government leader is the Water Daimyō.

Little is currently known about it and it apparently leaves itself out of most political affairs, which is understandable considering that it is composed of vast islands relatively remote from the continent containing the other four major countries. What is known, however, is that the country used to be ravaged by many civil wars, during which clans with kekkei genkai were used extensively, causing many to view them as harbingers of war and death, leading to purges and genocide to the point of parents killing their own children. Many clans went into hiding, such as the Yuki clan.

Kirigakure (霧隠れの里, Kirigakure no Sato; Literally meaning "Village Hidden by Mist"), infamously known as the "Village of the Bloody Mist" (血霧の里, Chigiri no Sato), is the shinobi village located in the Land of Water. As one of the Five Great Shinobi Countries, Kirigakure has a Kage as its leader known as the Mizukage. There have been five Mizukage, the current one being Mei Terumī. An unusually high number of missing-nin seem to originate from this village and as such a unique classification of ANBU known as hunter-nin are specifically tasked with eliminating these defectors.