Mod
Remember these are spoilery discussions - so stay away unless you've finished this section! Also, please keep spoilers to the things we know in this section of the book.

What are your thoughts on this section of The Shadow Rising?

Need a reminder? Here are the chapter summaries.

Favorite parts: Chapters 25 and 26 where the Aiel history is revealed are my FAVORITE. There is just so much world building revealed there. I've had to read those section multiple times to really understand all the connections. If you find it confusing, I suggest to try rereading those scenes backwards (to make it go in chronological order).

Chapter 15 was so typical mat. He was warned not to go through the doorway. Of course he does it anyway. Then he argues with the snakes/lizard ppl and sort of only gets one question answered as they just tell him more about his first question.

Mat’s trip through the doorway in Rhuidean was pretty neat. I gets in an argument with the Fox ppl and they give him the most powerful defensive items in the series. So typical mat. The Rand trip there is going to take awhile to digest.

Mod
Yes, very typical Mat! He's such a stubborn guy hahaha. The two different doorways were so interesting! I want to know more than what we get (as usual I guess). Yes, Rand's trip there takes some digestion. I reread it a few times on my last read, even though I've read it a few times before too. It's confusing because they go backwards in time.

Wow. Just WOW! This section of the book is some of the most gripping writing I've ever read. I felt my heart racing for most of it!

Mat's trips into the red stone doorways are hilarious as everyone is mentioning because of how determined, oblivious, and stubborn he is throughout while being in terrible danger. His luck means that he ended up actually getting really useful answers and objects despite that! Also, did you guys notice that he only ended up with two objects (spear & medallion) for the three requests he made? My husband thinks that the third thing he received was actually the hanging - that being hung and dying will release him from the Horn of Valere (since in an earlier book it was mentioned it was tied to the person who blew it until they died), and therefore free him from the Aes Sedai. I thought that was an excellent prediction!

The insight into both the Sea Folk and Aiel cultures in these chapters was also so amazing. I loved learning about all the different customs of the Sea Folk when Nynaeve & Elayne get on that ship (also, a note that I love the number of powerful women in this book, including the Sail Master and the Wind Finder on the ship).

The history of the Aiel as Rand discovers it in Rhuidean gave me shivers and had me in tears by the end. Somehow, for me, it was even more tragic going in reverse chronological order. We know how everything ended, how the efforts of each generation were futile by the next, how much was lost. I felt that loss very keenly. It was also so fascinating to see how the Aiel were connected to the Travelers! The song the Travelers are after is clearly the song used to grow things, right? The one the Ogiers know? I wonder if they could just talk to the Ogiers and get it...

These chapters also offered a really nice insight into Moraine for a change. I feel like we've rarely seen any of it from her perspective, so getting to see her machinations from the inside was really neat.

Also, GEEZ I am annoyed by Faile! Such awful, awful behavior. Truly abusive!

I think the hanging was the price and it might fulfill the die and live again from his trip in the doorway in tear.

Shannon wrote: "It was also so fascinating to see how the Aiel were connected to the Travelers! The song the Travelers are after is clearly the song used to grow things, right? The one the Ogiers know? I wonder if they could just talk to the Ogiers and get it..."

This is a really interesting point. The Ogiers know the songs of growing and the Travelers are very familiar with the Ogiers and have searched for 'the song' in the stedding and not found it. I'm not entirely sure that it is in truth the song of growing that they search for, neither do I think they are searching for the 'song of life'. I think instead they search for the 'song of peace', which is the song that the 10,000 Aiel sing to the mad male Aes Sedia Jaric Mondoran to help people escape Tzora before he destroyed it. I believe that the 'song of peace' is lost forever. The reason this makes sense to me is that the true aim of the Tuatha'An is a world in which all people follow the way of the leaf.

That makes sense, Donald. I didn't realize there were different songs!

Shannon wrote: "That makes sense, Donald. I didn't realize there were different songs!"

That was the theory back in the early 2000's. There are a lot of people who believe 'the song' they search for is the seed song, but the Aiel version that was sung with Ogier as well. One theme Jordan used frequently is how stories get corrupted over time and information lost.

I did also want to bring up Faile. Yeah she is pretty rough on Perrin through most of this book. However, we must see this in context. Faile is a rich girl, who grew up in luxury with servants to command, and her family obviously had the expectation she would be the pretty pretty princess type which is why they named her Zarine. We can see from the way she dresses and acts, and her desire to do something worthy of stories that she probably isn't the type of girl her family wants. Compare that with Berelain.

Now imagine you grow up your whole life getting pressured by family to be something that you are really not. Now you are a teen girl and you finally break away from expectations and go on a grand journey... even find a nice guy and fall in love with him. Then imagine the guy you love looks at a girl who is completely opposite you (Berelain) and then implies he is more attracted to her. It was supposed to drive her away but instead was emotionally devastating. It came across like he was trying to get rid of her because he wanted a different type of woman... the type everyone else wants.

It took me a long time to understand Faile because they don't explain Saldean culture until later books. That is a part of unlocking why she is so unlikeable at times. Additionally, you have to understand she is extremely insecure and jealous... and a teenager.

Well, I was definitely not a fan of Mat in the first two books, but have grown to love him in books 3 & 4, so it's very possible Faile will evolve as a character and I'll grow to empathize with her. In these chapters, though, she's very much on my bad side!

I remember the scene at the end of this book (4) I read in 2015. She's (Faile) a women that gets things done and doesn't necessary follow conventions. And I liked her the rest of the series. I'm not sure if I liked her or not when I read first few books back in the 90s. It's been a long time.

Scott wrote: "I remember the scene at the end of this book (4) I read in 2015. She's (Faile) a women that gets things done and doesn't necessary follow conventions. And I liked her the rest of the series. I'm no..."

She is incredibly important to Perrin's development as a character. He hates the idea of leadership in part because he doesn't see himself as having the qualities of a good one. I think Faile really helps him see those innate qualities he has that make him a good leader and also helps him develop leadership skills he doesn't have.

Shannon wrote: "Well, I was definitely not a fan of Mat in the first two books, but have grown to love him in books 3 & 4, so it's very possible Faile will evolve as a character and I'll grow to empathize with her..."

In my experience people either love or hate her. She is very fierce and fiery in temperament. Jordan wrote her to be polarizing. My goal is to help provide context. Don't expect to find yourself loving her in up coming books.

By the way.... This is how I always imagine her to look. Does anyone else agree with this?: 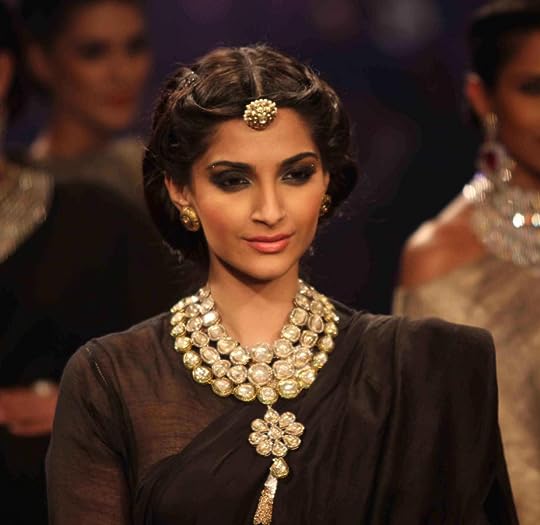 Mod
I'm on the side of loving Faile! I agree that she's really important to Perrin's character development. I don't think I ever had a picture of what I thought Faile looked like but I love this one Donald! I can really see the high cheek bones.