This topic is about Night Brothers
37 views
SOLVED: Adult Fiction > SOLVED. PNR- Female vampire, female journalist who is having trouble with boyfriend. Cover has the face of a black panther and woman's profile on it. Read in the late 90s. [s]

Hello, I remember that in the beginning the vampire was fleeing from a mob during colonial times and when she tried to cross a stream she got trapped(?). She reawakens during a drought in a small town and meets a newspaper journalist who is having relationship problems with her boyfriend. (view spoiler)[In the end the vampire decides she wants to make the woman her companion and the boyfriend swoops in to save her after figuring out the vampire is in fact a vampire (hide spoiler)]

Mod
Sarah, who is the black panther?

I think it might be the vampire. I sort of remember shape shifting being among her power set.

I did some googling and found Night Brothers by Sidney Williams, which looks promising. 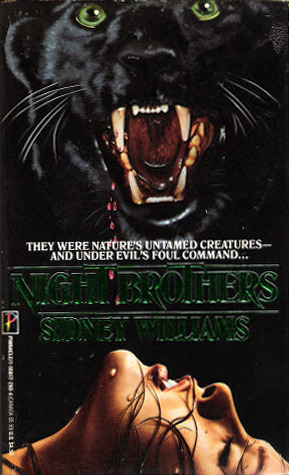 "Alison and Travis have settled down to manage a small-town newspaper when mysterious and lethal animal attacks start occurring. Parallel with that we are shown Navarra’s occult practice, controlling animals to attack residents as cover for her taking their blood to continue her life-in-death. In the story’s middle she takes an interest in Alison, and this unfolds in a superbly controlled manner redolent of such spiritual horror as Henry James' Turn of the Screw."