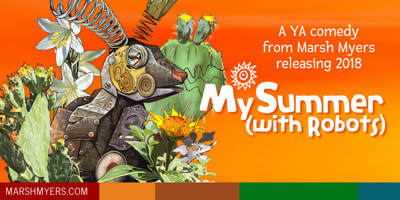 Synopsis: The summer before Quinton Wyatt's freshman year in high school should be nothing but wall-to-wall fun. Unfortunately, his best friend has stopped talking to him; his fiendish older sister has filled his head with tales of a sadistic high school ritual called "The Freshman Stomp"; and his divorced father's taken up with the city's most notorious barfly. Maybe a robot rabbit and an admirer from his past can help salvage Quinton's vacation and launch him into the difficult — but often hilarious — world of young adulthood?

This title will be released in Fall 2018.

Olivia wrote: "Congrats. Love the colorful cover." Thanks, Olivia! That orange and green is really eye-popping, I think!