Mod
Do you possess any paraphernalia from actual movies? Gloat about it here...

Mod
a fabulous brick-and-mortar store for classic posters of all kinds (food, fashion, advertising, travel, music, books, cinema) which also has an online gallery for browsing

Mod
I myself just realized today I own two dinky little paintings from the 1940s by none other than Gil Elvgren. I thought they were harmless, dorky cheesecake pin-ups but it turns out they're from a famous artist who pioneered the format

I have a copy of the Maltese Falcon that sits proudly on my bookshelves......."the stuff that dreams are made of". 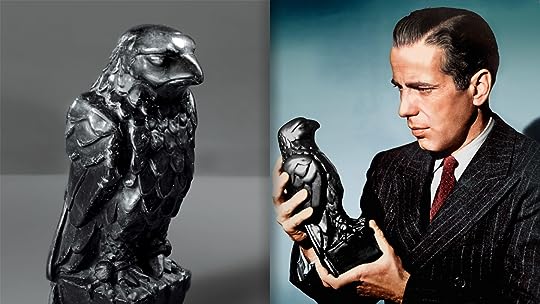 I have a framed, original Star Wars, Sin City (double sided) and Labyrinth posters. I also have a lot of collectibles from Star Trek, some scripts for television shows and movies and some uncorrected proofs of novels.

My family visited Florida in 1963, and I talked them into going to see 'Lawrence of Arabia', which is a very long movie. I was able to buy the booklet that was produced to go with the movie. I still have it even after all these years because it has been my favorite movie since I first saw it.

Mod
Sweet. Y'know any memorabilia should always be checked out online to see how much it might auction for.

I have another one to share. My favorite movie critic from my hometown, (no one would know him, just a local guy) owned one of the 'cancel-the-nuke' keys from Robert Wise's 'The Andromeda Strain'. The 'odd man' theory. There were only two of them made for the film, so he really valued it. Never said how he came by it, though.

This was a radio-based critic (fyi), and he'd sometimes have cool guests like Siskel/Ebert. 4-6 straight hours of chat with those guys was a real eye-opener. They were nothing like as presented on their TV show.

One time, either John Boorman or John Milius swore he was gonna come down to the station personally and kick-the-ass of this broadcaster for disliking his latest release. But this critic --though he had a squeaky voice --was actually very well-built and he laughed his ass off at the idea. "Gee, I'm really looking forward to it!" he crowed.

I really liked 'The Andromeda Strain' with Arthur Hill. It's amazing what people save from favorite movies, etc.

Betsy wrote: "I really liked 'The Andromeda Strain' with Arthur Hill. It's amazing what people save from favorite movies, etc."

Me too! And although it is clearly dated, I think it still stands up today.

One of my favorite things that sits on my library book shelves is a boxed DVD set of Bogart's greatest films, with a sweet personal note written on the box from Stephen Bogart, Bogey's son. I entered an on-line contest about Bogart and won. I was stunned!!

Wow! That was nice. You may not win on the GR book giveaways, :-) but that film was a winner.

Mod
eh? Huh? How is, 'Andromeda Strain' in any way dated at all? It's a classic in both book and film. Each one was a milestone.

Betsy wrote: "Wow! That was nice. You may not win on the GR book giveaways, :-) but that film was a winner."

I still have not won anything on GR book giveaways!!!!!

Mod
Reminder, we've stated that remarks like 'dated' or 'over-rated' are too inaccurate and subjective for use in discourse around here...nom nom nom nom...I'm not a rule-monger but this is one of our flight checks...

I still have the Fantasia 2000 booklet.

I wonder whatever happened to this portrait of Gene Tierney as Laura which was in her apartment in that film? Now that would be something to have. 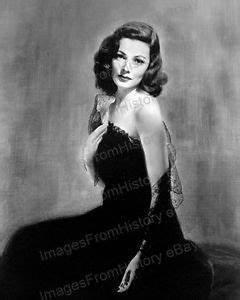 Mod
I suspect a lot of classic memorabilia is bought and sold on the collector's market simply for the sake of investments, tax evasion, and ROI.

That certainly is a good portrait of her. She had some unhappy times in her life. Reminds you of 'The Mirror Crack'd from Side to Side'.

I always thought it was beautiful. So even if you weren't a movie fan it would still be a nice thing to have. Except I wonder if someone actually painted it from life or if it is a photograph doctored to look like a painting?

Mod
Oil paintings of that style, aren't that difficult for any competent painter. Studio probably had a staff artist whip it up in a couple afternoon sittings. Whereas blowing up a photo that large (and touching it up) would have been a tougher task, in my opinion.

Feliks wrote: "eh? Huh? How is, 'Andromeda Strain' in any way dated at all? It's a classic in both book and film. Each one was a milestone."

It was filmed in 1971, so what was supposed to be futuristic and cutting age is, well... not. Please don't misunderstand me, I love both and can reread and rewatch and never feel like it's old hat. They are both works of genius.

Mod
H'mmm, well ....naw, I still don't see in what way its not cutting-edge. What I have always read about Robert Wise's movie (even recently) is that the design of the lab and the procedures for sterilizing the party of doctors is still astute, still grounded in best-practice, and still well-conceived. In other words, if you were building a modern bio lab today with unlimited budget and you were going truly all-out to be hardcore, this is still what you might do.

Do today's less-than-hardcore standards compare more favorably than the set design of 'Andromeda'? Well, if you visit any commonplace hospital environment today, what do you see? More computers, but nothing which is as deftly imagined as in this film. I don't know of any operating room anywhere which uses space-suits. Yes you see more numbers of computers and more digital displays. But Windows-based computers are garbage, of course. I hope you're not impressed by them. They don't represent 'hi-tech' whatsoever. They're 'junk tech'.

Movies like 'Andromeda Strain', 'Planet of the Apes' and 'Rollerball' all exhibit digital-looking readouts (in advance of the digital readouts we commonly see around us today), so they didn't overlook the proliferation of computers. They didn't miss a trick. They overlooked only the proliferation of personal computers. And of course the screens/monitors in those flicks can't possess the exact look/feel of Microsoft (com-model based) Windows.

As for the look and feel of the screens and readouts in Kubrick's 'Space Odyssey', (1969) they still do all look more advanced than what you see in a Windows environment or even in an actual shuttle environment. They look better than anything we've done yet.

A question like this is settled if you venture into more tech environments where the computers interface more with operations and systems; rather than just information-processing. For example, a nuclear facility. Compare the control room in 'China Syndrome' to a control room today and you won't see much difference. I myself work with Northrup-Grumman cntrol systems and this is a manufacturer who provides for both NASA and the US Navy. That's why I can attest that real computing is not dissimilar to what you see in landmark flicks like the ones we're discussing.

Mod
another example might be how (in 'Andromeda Strain') you see that every bio lab no matter where it is located on any floor of the underground facility, they all communicate their data and experiments and results back and forth among each other. There's a centralized computer storage somewhere which manages all the traffic back-and-forth and keeps it all in sync. I can assure you that same concept is found in any large organization today. Any decent-sized company (50 or 100+ employees) does precisely the same thing.

Jill wrote: "I wonder whatever happened to this portrait of Gene Tierney as Laura which was in her apartment in that film? Now that would be something to have.

Just got Where The Sidewalk Ends from Amazon. Bought it w/Xmas gift card! Never seen it! I am giddy with excitement.

She is a goddess!

Not quite Laura, but still a damn good film.

Also got Twilight (not the mega-popular vampire thing, but a very decent neo-noir with Newman, Sarandon, Hackman, Garner, and a very young and topless Reese Witherspoon.) That was on VHS at Goodwill. Nice movie for a dollar.

I'm not familiar with that one, Spencer. But, hey, for a dollar, it can't be a bad buy.