Mod
Next week's episode is all about the X-Men: who's the best and who's the... Cyclops.

Favorite X-Men character for me: Gambit. He's the guy everyone doesn't like but somehow still loves him. He's cheesy and over the top, but he still gets invited to family dinner every week. He's suave and knows it, and most people see right through it, but he is what he is.

Least Favorite X-Men character for me: Um... this is a hard one for me... Toad? Sabretooth? Some of the villains are just bland. I mean, I go back and forth about Wolverine... it's all so grim and uninteresting to me.

Mod
I AM SO EXCITED THAT THIS TOPIC IS HAPPENING, first off.

Ok, fave X-Men character is probably Jubilee on a superficial level, because when I think of her I think of 90s Amazing Trench Coat Jubilee, and I was a visually impressionable child. Less superficially, I'm fond of Beast for his delightful expressions and Storm because Storm. Gambit's on my list because hello everyone loves Gambit, right? In like an "I'll date you but be vocally exasperated about your every habit and mannerism to all my friends until they tell me to stop" way (just me?)

Least fave: Cyclops. Oh my god, get over yourself. Second on my s-list right now is probably In Denial About Being Gay Iceman, unless that's no longer a thing--I don't read many X-comics so all my judgements are snap ones, obviously.

Favorite: Like Kara, I am bound by my childhood love. Nightcrawler. He has such a cool character design, and he's one of the few X-Men to get their own sound effect! He's my go-to example of a teleporting hero. The fact that his teleportation is basically just him moving through hell just made him cooler, in my book.

Least Favorite: The Blob, especially in recent years when they've tried to make him grim and horrible. Like, he eats people now? I draw the line at "eating someone alive." At that point it's less about the character, and more about the writer going "look at how edgy and shocking I can be."

I love Nightcrawler's powers and the quality back story. But, the way most writers handle him has always seemed either dismissive, or too heavy handed.

Wolverine was a favorite. That is, until he became everyone's favorite. Then, I was over him.

Colossus is cool. But, I never thought of him as a favorite. I think everyone gives Storm's powers too much credit. I mean, humanity has lived through the worst the weather could throw at them for millions of years. Just because you control it doesn't mean much, IMO. Marvel Girl, Beast, Iceman - all just "OK."

I loved Jean Grey as the Phoenix, it her original manifestation. Back then, there was no "Phoenix Force" that we knew of. It was just Jean with a new level of cool awesome powers. She was definitely my favorite character...at the time. I thought it was brilliant that they had the guts to kill her off, even though my adolescent mind was so blown and angry that they had. Once they started resurrecting her ad nauseum, I can't really stand her character. There is no emotional investment in her anymore. I just know, no matter what, she can't really die. (I know that's true for every comic character these days. But somehow, it taints Jean for me in a different way.)

So, Kitty Pryde is my favorite. I was an in-the-mail subscriber when she first appeared in #129. Right off the bat I thought is was cool to see how she was invited into the fold and to watch her develop. She has a good back story, cool powers that aren't over powerful, and depth of character. Although, I admit I'm not at all interested in her upcoming wedding to Colossus. She was just engaged to Starlord. I think this wedding announcement is Marvel's knee-jerk reaction to the Bat/Cat wedding coming up. So, lame. I prefer Kitty as her own strong character, without the need for "a man."

I also remember getting 129 in the mail.

That was the issue with Logan checking out Hustler in the candy shop, and Peter is blushing behind him.

And Nightcrawler was definitely my favorite as a kid, although as you say, he has never been made interesting by the writers.

Notice how Wolverine really came to the fore with the Hellfire Club story arc.. 133?

Phoenix was really too powerful to be on a team. As I understand it, the plan was to reduce her to Marvel Girl strength (and I've seen the alternate splash page to 138), but Jim Shooter said you can't walk away from wiping out billions of asparagus heads.. and he was right.

Oh, man. Too much Cyclops hate here. I kind of liked how Grant Morrison explored the hard work that goes into priggishness. It's actually a super-power... :P.

I'm a pretty casual X-Men fan, in that I have only really read a handful of X-Men comics and most of my knowledge of the team comes from the cartoon and movies. That said, the character that always seemed the most interesting to me is Kitty Pryde. I always like those characters who seem function as the readers' perspective of the team. Jubilee had a similar role in the 90s cartoon, which is why I have always liked her as well.

It's easy to say Cyclops is the worst, although I think Gambit is even worse. But the worst X-Man is clearly Charles Xavier, right? He is constantly putting teenagers in jeopardy and dying.

I'm going to mention three female X-Men I always found entertaining probably because of the bad girl attitude and their femininity.
- Mystique - The potential for this character is immense, but she wasn't always written very well. I guess I enjoy the ability of being able to impersonate anyone which may come from my attraction to the spy genre. On top of that, just imagine dating someone like that and being able to fulfill any fantasy.
- Psylocke - She became really cool once she dropped the butterfly thing. Again, the bad girl look did wonders for her in my opinion. Or maybe I just like a strong woman that can read my mind and wield swords while being as sensual as the best of them. Or it may be the accent, or the cold, calculated manner she sometimes has.
- Emma Frost - The sexiest one by far, she is a strong woman who knows how to use her assets to manipulate men even without using her powers. Featuring her as Cyclops' love interest has shown her as an intelligent, sarcastic, but also loving woman whose hands aren't tied by all the ethics and morals of most X-Men.

Mod
Kitty Pryde is my favorite too, with Nightcrawler a close second.

Cyclops in recent runs really irritates me, but Toad is just the worst.

Ohhhhh no so much bashing on Cyclops!! All things considered he has done so much for Mutants.
He can be a jerk and boring and square but the worst?
Smh kids lol
Cyclops was right!! The mutant revolution will not be televised!

That being said Kitty is my favorite currently, closely followed by Laura Kinney, the Wolverine
If I had to pick someone to hang out with it would be Nightcrawler and Colossus go to the mall with Jubilee.

From all the new kids I think Eye Boy, i just think his power is so cool but hUs mutation makes things very difficult for him

Mod
I haven't read many X-Men comics, so I don't know how the characters compare to their movie versions. In the movies, my favorite character is Hank. I have a number of characters I'm annoyed by, but none I hate with a passion. The one that icks me out the most is probably Toad.

As easy as it may be to hate Cyclops for his more recent attitude, he is still generally one of good guys. As far as I can tell his killing Xavier is the worst thing he ever did and that was in part due to the Phoenix Force. I've read Uncanny X-Men since issue one and there are plenty of characters who did more killing but never angered fans. His stuck-up and seeming antisocial attitude is easily offset by his cool power which he trained for countless hours in the Danger Room, his leadership skills that have more often than not brought mutants together and his goal to help mutants live in harmony with humans (at least most of the time). Really, he's a boy scout. 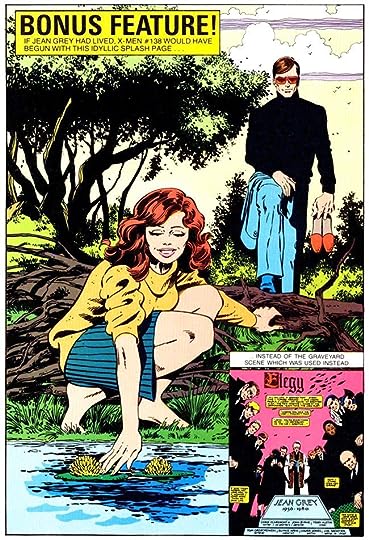