They weren't truly the best books I read in 2017, but I definitely have to say that the Velva Jean series, by Jennifer Niven, has stolen my heart. I finished the last book months ago, and I still think about the entire series!

The worst book for me was either Joyland by Stephen King, or This House is Haunted by John Boyne. On one hand, you have a character who, now in his 40's, still hates his ex from college because she wouldn't sleep with him (which he never lets you forget), and on the other, you have a "Victorian Gothic" novel that has no redeeming characters or qualities, and almost no knowledge about the actual Victorian period.

Worst for me was Libri di Luca. How pretentious it was! Really awfully written.

Mod
I guess the 'worst' would be the ones I didn't care to finish: 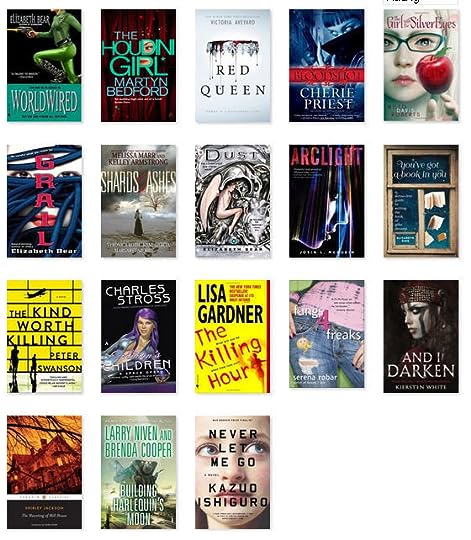 Sorry I haven’t been posting much recently! Last month was really busy for me with the holidays and end of the year…still trying to play catch up at the moment…

The first few months of 2018 will be busy reading months for me so I probably won’t be participating much in the group reads....hopefully I’ll be able to get back on track mid-year though.

For my Best and Worst of 2017 recap – here’s the link to my Year in Review here on GR where I listed all of my favorite reads for the year. I also included a link to the recap on my blog, which is slightly different in that it has some stats in it.

In terms of Worst reads…like Kelsey, I was lucky to only have a handful of books that I didn’t like. Out of the 56 books I read in 2017, only 5 would fall into the “worst reads” category. These books I rated at the 2 star level (2 or 2.5 stars):

Agathe Von Trapp: Memories Before and After the Sound of Music by Agathe Von Trapp (memoir)
Regarding Anna by Florence Osmund (fiction)
The Idea of You by Amanda Prowse (fiction)
Last Things by Betta Ferrendelli (fiction)
Tiger Moms vs Western Parenting: Is There a Happy Medium? by Dori Nolan (non-fiction)

Overall it was a great reading year for me and I’m looking forward to more of the same in 2018! :-)