I love the premise of this book, the seeking to answer why all of the Victorian mad scientists never made a woman monster. This book is a fun filled adventure story and all the famous monster names are included, such as Van Helsing, Jekyll, Hyde, Frankenstein among others.

What kept this book from being great, instead of just fun, was the character side bars taking place constantly throughout the chapters. Normally these do not bother me, but for whatever reason I found these side bars annoying and distracting for most of the book and only in the last few chapters came to accept, if still not like them. This just me?

The first few threw me off, mostly because I had no idea who they were. But once I got a feel for the characters, I loved them.

Mod
I thought they were great. It did take a while to work out who was who, but it was showing them as a family, comfortable with a bit of friendly ribbing.

I find them disruptive. Normally I like bits of humour thrown into a story but the tone and style of the comments were completely different from the narrative and sometimes came in the middle of conversations or action scenes. Maybe if they had been presented as footnotes instead I wouldn't have found them so jarring.

I found them distracting. I kept trying to picture the scene where Cat is writing the novel, and all the other characters were standing around her reading it and making comments, and she is stenographing those comments directly into the manuscript she's working on, including her own comments that she is both saying out loud to them and writing down simultaneously? How could anyone write like that, it would be such a mess. They would have worked better as annotations.

Furthermore, it destroyed any dramatic tension in the book by spoiling the ending. We know from the sidebars that all the characters survive and end up living in a house together. So we have as a central point of the book a serial killer that we know won't kill anyone. Giving Jack the Ripper a squeaky foam knife lets all the air out of what was supposed to be the climax of the story.

I have to say they are one of the things I'm enjoying most in the book. I'm listening to the audio book and the first time it happened I was confused until I realized what it was and since have embraced them and in fact have anticipated a few. I wouldn't want a steady diet of this in other books but here I really like the humor and how you have to try to figure out who they are as the story unfolds.

It's been a while since I posted a drawing from one of the current book picks (maybe since we read Tigana?), but I'm halfway through The Strange Case of the Alchemist's Daughter and I couldn't help but do a little sketch of the characters! (Be warned -- I might not have listened too closely when they did all the character descriptions! Also, I don't really know too much about the period clothing so don't look too closely!) 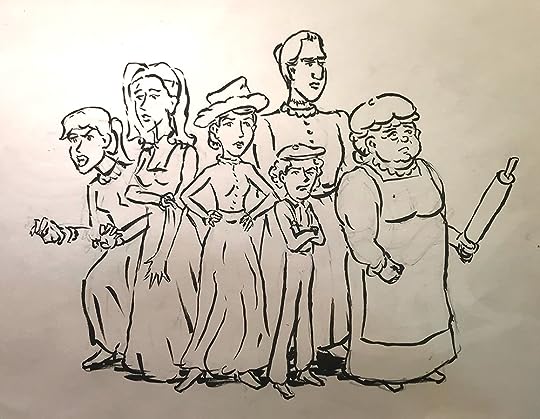 Mod
Fantastic drawing. :-) It's easy to pick who's who.

You did miss one. Though it is later in the book.
(view spoiler)[You missed Alice (The scullery maid). She is part of the Athena Club (hide spoiler)]

That is only slightly spoilery.

The side bars/cut scenes are throwing me off too.

Sorry, I totally posted my picture in the wrong thread!

But I’ll add that the side bar conversations are particularly jarring in the audio book. Is it at least in a different font or italics in print?

Mod
It is easy to tell them apart from the main story.
Here is a page from my iPad Kindle version, with Mary and Diana's side comments. 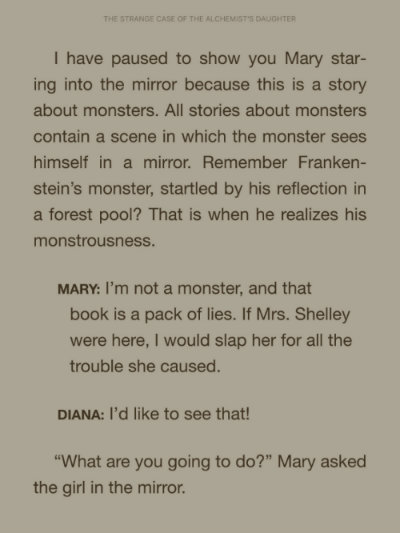 The side bars are a big strike against the book for me. To me they just felt like a intrusion and messed with the pacing.

Chris wrote: "It's been a while since I posted a drawing from one of the current book picks ...."

They do add to the dynamic between the characters. There is also a lot of foreshadowing for the sequel(s)

Not essential to the story, but they add to it.

The cynical part of me has noticed that Goss has complimented her own writing at least 5 or 6 times by having other characters tell Catherine "oh, you're such a good writer" or "that part was beautiful!" It's probably a self-referencing joke but it's also patting herself on the back.

Mod
To be fair, she does have them criticising Catherine's writing style as much as they praise her.

I can understand how it might be difficult to follow the sidebar commentary in the audio edition, but in print, I didn't find it a distraction. The commentary highlights the personality of each character and I enjoyed that.

I loved the commentary. In my mind it played out like scribblings in the margins of a first draft that became incorporated into the second draft.

For me this book was all about the characters and their interactions. In the early parts of the book before some characters enter the narrative the commentaries are essential for establishing their personalities and the group dynamics. I'd go so far as to say I don't think I would have liked the book without the interjections.

The sidebars actually make the book for me. But then, I read the ends of books way ahead of time, too...

Firstly, I'm loving the book. The comments took a bit of getting used to but they are not spoiling the book for me, and adding a few chuckles.

[Update: After finishing the book I would add that, after about halfway through, the annoyance factor dropped to almost zero. I guess it's just getting used to a different format]

I think the author is doing exactly what Catherine says in one if the comments - she is experimenting with how to tell a story, it's a bit postmodern/meta for my tastes and I'm pretty certain that I would have put the book down... but the story is just so darn awesome that I just plowed straight on through.

I think the comments would have worked better as actual "sidebars", by which I mean margin notes. As they are, they break up the text (intentionally I assume) and as has also been mentioned they make no sense - why would the writer copy down verbatim comments, including her comments telling others not to comment? Maybe this is explained later [Update: it wasn't]. Margin notes would have made more sense imho.

I am loving the story, but hating the comments very much. It seems so indulgent and unnecessary to me, and many times they have me cringing at the odd, self-congratulatory feel they have, especially when hitting me over the head with themes the main story conveyed far less awkwardly. It distracts the flow but adds nothing.

I found the sidebars odd at first, but quickly came to love them. I find it a neat way to understand more about the characters since we're essentially seeing two sides of them at the same time. Their super snarky to each other, which I also love too. :)

I would have preferred to seen them handled as foot notes TBH. It would have kept the good points of then without disrupting the narrative.

I like it when authors try something different. Sometime it works, sometimes it does not, but I will always give the author a shout out for trying. it would be interesting to see the give and take between the editor and the writer sometimes.

Mod
Nathan wrote: "I would have preferred to seen them handled as foot notes TBH. It would have kept the good points of then without disrupting the narrative."

But disrupting the narrative, is the point of them. Catherine actually changes the story (in places) slightly based on them.
Having them as footnotes (which a lot of ebooks don't handle well) makes them easily missable or ignorable, which would disrupt their actual purpose.

In a light fun read, they are a humurous addition.

Tassie Dave wrote: "Nathan wrote: "I would have preferred to seen them handled as foot notes TBH. It would have kept the good points of then without disrupting the narrative."

But disrupting the narrative, is the poi..."

Which is why they were bad, or at least annoying. You are constantly being pulled out of the narrative and spoiling the ending, losing any sense of tension. Showing the sausage making of writing was tedious and rather boring.

I love them! I was surprised at first, but I think they really add nice flavor to the book. We can see more of the characters' personalities through them. But, as Brendan said, it gets confusing if you try to think of the actual scene of Catherine writing the story while typing up everyone's responses. I just try to let it slide and not think too much about how these comments are appearing in the story.

Just started and I’m not enjoying the aside conversations - just a distraction.

I didn't mind them much while I was reading the novel, but I think that in retrospect they're kind of unnessecary and a bit self-indulgent. They don't add much to the story, the character interactions were already there in the text of the novel and I didn't need to see the asides in order to delve further into the characters or their relationships with each other. In fact, as has been pointed out, they do remove the element of surprise.