Get Captured in Words! discussion

Mod
FINALLY we get to see what these ‘Koloss’ things are! I’ve been waiting for this! And wow are they ugly. 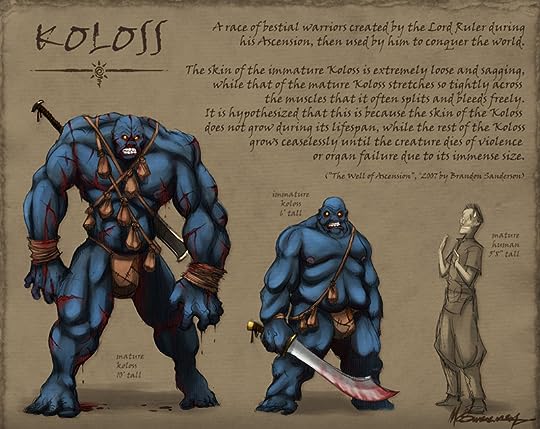 I find Vin’s growing relationship with OresSeur to be really interesting, as from the beginning I had an opinion very much like Vin; That thing is creepy and it ate Kelsier.
But after the chapter where we learned of Kandra’s abuse and how they act insignificant in order to avoid attention, much like how Vin had to live, it really brings an entire new perspective. OreSeur is even beginning to trust Vin more and possibly even care for her, as we see him bark when Tindwyl is approaching her door early in the morning. I’m not saying I entirely trust the Kandra species, after all we still don’t even completely understand them, but I am beginning to like OreSeur. 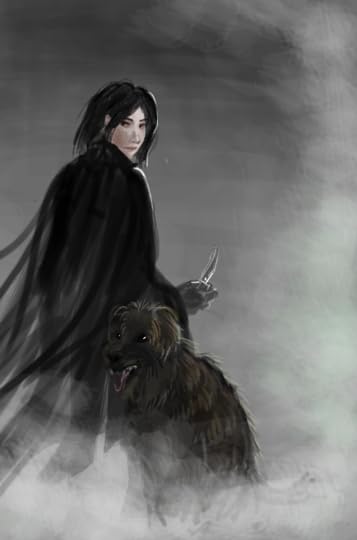 One person I definitely don’t trust though, is Allrianne. 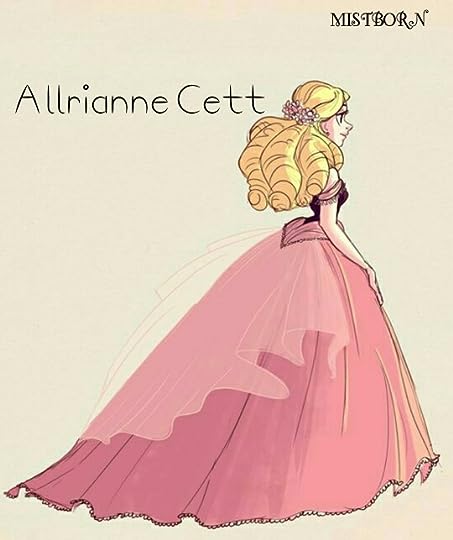 I think she could easily be hiding something, especially with how she spied on their conversation in the middle of the night. Too suspicious.

“You just told me you liked me how I am.”
“I do,” Elend said. “But I’d like you however you were Vin. I love you. The question is, how do you like yourself?”
That gave her pause.

The scene at Straff’s camp was SO intense!! Straff that manipulating bastard. It’s sick how he brought in that young 15 year old girl resembling Vin, just to make a point of who’s in control. He needs to be assassinated. I was so happy when Elend finally decided a different tactic, and threatened to set Vin on a slaughtering spree >:)
However, now we are left worried. Will Zane actually try to kill Vin? I don’t see what reason he has on listening to his father, especially since he seems to like Vin. It’s crazy to think Straff has a ton of Misting children.

Aaaaand now Elend is apparently being impeached. I wonder if this will follow through and someone else will take the throne, or if they will find a way to stop it? So many questions, I can’t wait to read on! 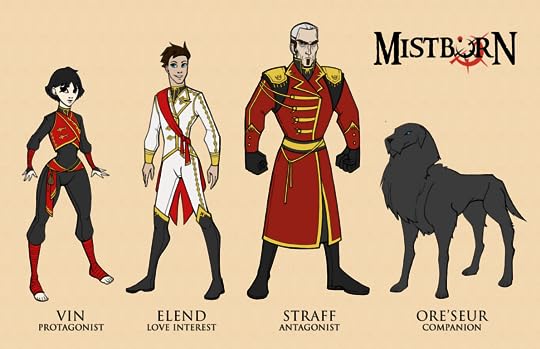 I agree 100% with everything Jay writes! Especially about this Allrianne character! What an annoying belle. Here she is in a post-apocalyptic, post-collapse town under siege, without food, and she cares about trivial stuff like high ballroom evening gown fashion! Somethin's fishy about her for sure, she couldn't just have escaped her father. Or be in love with an older skaa warrior! When later on in the carriage she found out Vin is also skaa, she freaked out. "Poor you!" (my translation again, sorry!) She's a spy/assassin and should have been quarantined immediately. To make a far-fetched assumption, I don't trust Breeze either. They're in on it together. I can't believe how he humiliated Vin like that, telling her that she had the hots for Kelsier at fifteen, in front of Elend!!! My heart froze. Not even his sadistic father would commit such a disgusting offense! :/

That entire chapter with the koloss in the distance... brrr! When Sazed climbed on that tree and froze at their distant presence and then saw them coming and suddenly they were sourrounding the tree and telling him to come down! Again I got that claustrophobic feeling. How is their new master keeping them at bay? How was the Lord Ruler controlling them all these centuries? I feel like these questions shall be answered soon. It's strange but his aura is still alive and noticed, even though he's been murdered for a year now. He's more "present" in the Well of Ascension than he was in the Final Empire, at least that's my feeling! In the end we'll end up missing him, hehe.

Sazed is so clever, the way he convinced that king Jacte (Jeist?) to let him leave! I also loved how, upon arriving in Luthandel half-starved, he refused to eat in the presence of the King till he was debriefed. What a noble guy! I can't accept that they didn't believe his testimony about the killing mists.

I sense there's some old story between him and that Tindwyl terriswoman. She seems great but she has some agenda of her own too. Every character is so complex.

I'm so happy Spook isn't the one eaten by the second Kandra!

Ore'Seur is amazing! I'm very fond of him and I found the whole Chapter 22 deep discussion between Vin and him to be a revelation. Of course... Of course her problem would be that the kandra knew Kelsier's self-immolation plans and didn't stop it! But was it his place? Such an amazing piece of writing there! Ore'Seur had no idea who Vin was prior to meeting her? No idea of her childhood in the streets? Again, so interesting! This is what's great about Sanderson, one doesn't have to wait for a battle scene (or pretend city attack!) to read adventurous stuff, simple conversations between allies on a misty rooftop at night time can be captivating!

What really shook me is that very distant pulse only Vin can listen, coming from the North! This must be from the Well of Ascension. Something is calling her, like it was calling Alenti a thousand years ago. As Jay wrote in the previous post, maybe we'll see this mythical place! In my edition, there's a map in the first page and in the very top it includes a number (8) "Mount Derytatith, Historic Location of the Well of Ascension". Its name wasn't included in the Final Empire volume map! OMG.

I'm beginning to guess that maybe Vin is the Hero of Ages! Even that demon Straff Venture let Elend leave his camp alive because of her strength. He believed she would slaughter him and his generals and no one could stop her. I hadn't realized she had grown so strong! How did this happen? She has no other Mistborns to train with or be taught by, no atium (I don't agree with her spontaneous decision to reveal this to Straff, what was she thinking? What were the both of them thinking, going there all alone to pretend surrendering the capital?) Kelsier was never that strong. She's stronger than Zane, then? If Straff had even one Steel Inquisitor in his service, there in the tents (where did those ten remaining Inquisitors disappear to?), wouldn't he have easily killed her in a sec?...

Finally, after literally a thousand pages in this Trilogy, one thing I didn't like reading. I feel negative about Vin's confession to Tindwyl that she's not good enough to be with Elend, that she refused his proposal because she's not noble enough to be his Queen. It didn't feel like Vin... plus Elend doesn't deserve such a shallow appraisal (is this the word I'm looking for?) This "I'm not good enough for him" girly trope felt like it was coming out of some "The Selection" YA novel. Did anyone feel similarly or was it just me?... Vin, you're good enough!

I wonder: are they a real couple? Are they intimate? The author hasn't touched this at all. ;)

Mod
Dimitris wrote: "I agree 100% with everything Jay writes! Especially about this Allrianne character! What an annoying belle. Here she is in a post-apocalyptic, post-collapse town under siege, without food, and she ..."

Really?? Personally I completely trust Breeze ;) especially after the scene where Vin discovered he's been rioting Elend to make him more bold and courageous and also soothing away his anxieties, all the while still voicing his opinions. And I believe he does this on most occasions, not for his own personal gain, but for the gain of others. He soothes and riots the team to their highest potential. Breeze is actually one of my favourites out of the group! Personally I didn't find what he said about Vin having the hots for Kelsier to be too offensive, it just seemed like he was teasing to me. Although it embarrassed Vin a bit, it didn't really do much harm. XD I think Elend's sadistic father would say much worse!

brrr indeed! I had a shiver run down my spine when Sazed noticed the Koloss were surrounding the tree! So glad he got out of that camp! Yesss and how he refused to eat until he was debriefed! Hahaha gotta love Sazed. There's definitely some history between him and Tindwyl. And I completely agree that the Lord Ruler almost feels more "present" in this book than the last!

The pulse, yes how could I forget to mention it! The same pulse that called to Alenti! Mount Darytatith is on my map as well, and I think Vin will most likely be going there soon! I've been thinking Vin is the Hero of Ages as well, especially since a lot of the things that happened to Alenti are happening to her.

I think Vin is powerful for sure! But Elend was exaggerating quite a bit to his father I believe, just as a fear tactic. I think Zane is also very powerful and could quite possibly be better or on par with Vin. However, she knows how to use Duralumin ;)

Yes I felt like Vin admitting that she didn't feel worthy of Elend was a bit melo-dramatic. I can definitely understand what you mean, by comparing it to a Ya novel! But this is a thing that people feel in relationships, especially when the one is more successful/famous than the other. It's silly, but some people do feel that way. As for Vin... Hmmmmm, maybe it is a bit out of character for her.... though she was quite insecure in the first book so some of that could just be appearing again. But it is silly, she should know how much Elend loves her. I'm not sure if they're intimate, but they're definitely a real couple that loves each other. Vin shouldn't hold back on getting married! Also, I like Zane but I reaaaaaallllllyyyy hope he doesn't get in their relationship. Please no love triangle!

Get Captured in Words!