yeah okay so i just had a thought: if anyone has any favorite images from productions they love, why dont we post them? it'll be a very, very picture board!
i have a lot of scans, i'll try and convert them! brb

This is from the Hungarian production of Elisabeth. The girl is Kata Janza, playing Elisabeth, and the guy is Sylvester P. Szabo, playing Death.

This is from the Essen production of Elisabeth, with Maike Boerdam playing Elisabeth.

The next few are of Pia Douwes playing Elisabeth 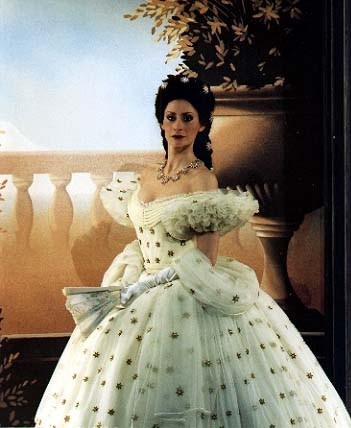 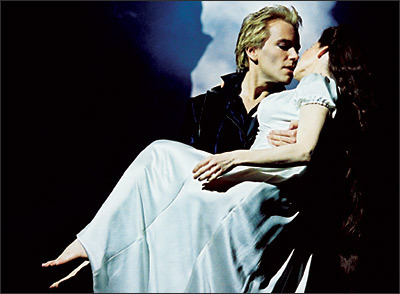 This last photo is of Pia as Elisabeth, and Uwe Kroger as Death. It is from the Essen production. 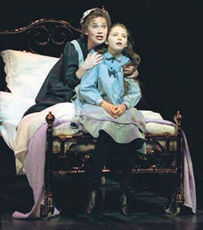 - Linzi Hateley and Tamsin Egerton, my martha and mary lennox from the West End's 2001 revival THE SECRET GARDEN

[image error]
- the THENARDIERS! and just about the scariest looking ones i've ever seen: broadway cast, LES MISERABLES 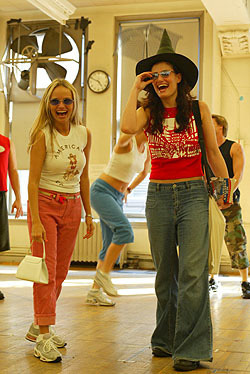 [image error] St. Louis's THE MUSIC MAN; this isnt from broadway, but i just love amaryllis in this pic!

Oh my goodness! I love the Therardier picture! And that Eponine is really beautiful...I'm still waiting for a really run-down Eppy who's missing most of her teeth, but somehow I doubt that's going to happen. :P All the Wicked pictures look really great. I'd love to be able to see that show live.

its from the first act, when mary and martha have a duet (A FINE WHITE HORSE, i think) i think the broadway soundtrack is on itunes; i got the west ends recording @ the show, but it's on amazon. im gonna post some more secret garden pictures; i had the most MAJOR crush on dickon!

There is a partial album on iTunes, but it doesn't have this song. What are some of the best songs in it?

first of all, if you havent read THE SECRET GARDEN - you should! it's a classic and as a kids' book, its extremely easy to read - it'll take you no time at all!

imo the best songs are "wick" "lily's eyes" "winters on the wing" and "come to my garden." other fans will say "how could i ever know?" and "where in the world" but those songs, to me, are really emo. dickon is the gardner and one of mary's only friends at her uncle's house. they regrow a dead garden together. READ THE BOOK ITS AMAZING!!

I'll definately read that. The songs sound nice. I hope I get to see it one day. I tend to like music more when I know what is going on. :)

yeah and bway makes me mad b/c this was very successful during its premiere run (1991-1993) but it has never been revived. my pals the british revive the show every few years, and the aussies have had a few productions also. HOWEVER, since it is a simple musical (no elaborate stagings or costumes) it tends to be a favorite among regional theatre/colleges.

I'll check out my local colleges, then. Broadway makes me mad in so, so many ways...

Well, I strongly believe that Les Mis should be playing on Broadway at all times. Also, there are so many other things that they should be reviving (Into the Woods, especially). When they revived Sweeney Todd, they used the odd staging. They did the same with Company, although I don't mind as much with Company because they had an awesome cast. And then with the German musicals...they brough Tanz der Vampire over, but completely rewrote it. The rewrite was absolutely terrible, and made it one of the biggest flops in Broadway history, turning off all of the Broadway producers against bringing German musicals over. 8 years later (now), they are finally bringing one over (Rebecca), but they're bringing over one that was only made 3 or 4 years ago, and Elisabeth fans have been waiting 17 years, and there are still now plans to bring Elisabeth over.

well it took them forever to invest in BILLY ELLIOT - i saw that like a billion years ago in london (okay more like 4 years ago). they've never revived THE SECRET GARDEN buuuuuuuut they're bringing back "ragtime"? come on that musical was only so-so! and let's not forget the whole producers vs. the unions. now i am a fan of orchestral music, but i don't think unions should have the right to tell producers (who are FINANCING the shows) what they can and cant do. and a bunch of grown ups acted like little babies and it shut down one of new york's most important sources of revenue for weeks.

well pretty much everyone who works in the broadway industry (actors, musicians, etc) belongs to a union.

"Almost all of the people involved with a Broadway show at every level are represented by unions or other protective, professional or trade organization. The actors, dancers, singers, chorus members and stage managers are members of Actors' Equity Association (AEA), musicians are represented by the American Federation of Musicians (AFM), and stagehands, dressers, hairdressers, designers, box office personnel and ushers all belong to various locals of the International Alliance of Theatrical Stage Employes, also known as "the IA" or "IATSE" (pronounced "eye-ot-zee"). Directors and choreographers belong to the Stage Directors and Choreographers Society (SDC), playwrights to the Dramatists Guild, and house managers, company managers and press agents belong to the Association of Theatrical Press Agents and Managers (ATPAM)."

a few years ago, there was a strike on broadway because the union(s) that represent the musicians were mad that producers were proposing to use recordings to play the music at shows, in order to save money. i couldnt find any articles on wiki to explain the strike, but pretty much the point i was making is everytime ppl cant get along, they just shut down, and tourists are the ones who get the short end of the stick, because you've purchased your tickets but you cant see your shows.

Thanks for the explanation. Yet another reason to be mad at Broadway...

my uncle works for the shubert group. it's not a union. lol i dont like unions (except in NEWSIES!)

Amelia*annabeth&percy*sittin in a tree* wrote: "well pretty much everyone who works in the broadway industry (actors, musicians, etc) belongs to a union.

"Almost all of the people involved with a Broadway show at every level are represented ..."

wasn't it stagehands who are the props, costumes, sets, lights, sound people, etc. instead of musicians? I thought that's why in the Macy's Thanksgiving Day Parade performance of Legally Blonde, Laura Bell and the cast didn't wear their costumes but just wore shirts from the show that you can buy as a souvenir. The actors supported the stagehands of course just like the SAG actors supported the WGA writers when they were on strike in Hollywood (these strikes also happened just about simulataneously causing the entertainment industry to plummet).

Rachel (aka. Kaiserin Sisi) wrote: "Well, I strongly believe that Les Mis should be playing on Broadway at all times. Also, there are so many other things that they should be reviving (Into the Woods, especially). When they revived..."

I really don't think Les Miz should be playing at all times. Look, it has saddened me so much with all the closings of the shows this year (the 13 in January were a killer) but so many people know the story of Les Miz. I really do think it is important that they are reviving other shows and bringing in new shows (Next to Normal is fantastic!) so that people can be more educated in their musicals. Les Miz is wonderful but if you only go to NYC and see Les Miz, that is all you know. I also think that since Les Miz has been on Broadway FOREVER and been revived so many times (and I feel this way about Phantom too although it hasn't been revived...just been on Broadway forever!), that other shows that have closed without their proper run should stay open longer than a show like Les Miz, Phantom, Cats, etc. that everyone knows about and that has been around forever. Spring Awakening for example was on Broadway for two years only yet it won 8 Tony Awards! More people deserved to see that show than the number of people who actually did (thank goodness for the tour that is allowing some people to see it but still not nearly enough). With the 13 shows that closed this year, most of them hadn't been on Broadway longer than 5-10 years (Rent being the exception...it closed last September after 12 amazing years).

I do agree that it took way too long to get Billy Elliot over to the states and that sucks about your show Elisabeth. I'm excited they're bringing over Rebecca. I don't know when it's supposed to open but hopefully it will be open when I go to NYC next spring for spring break!

Here are some pictures from the musical I ever saw.

And the theatre's trailer for the musical:
http://www.youtube.com/watch?v=kyKNZ8...