Wasn't sure where to post about this, so I posted it here.

Localization is when you take translated text and tweak it to match the local dialect and culture. The first Resident Evil (originally a Japanese game) is notorious for its bad voice acting, but it also had terrible localization: seems like they literally translated everything and left it as is, so we end up with awkward and bland exchanges that have since become memes on the 'net. If you ever wondered where tropes like "Jill Sandwich" and "the master of unlocking" came from, RE1 is the culprit.

Here’s a comparison of an exchange between Jill and Barry. They’re reunited in the lobby after running around in the house for a while, fighting zombie dogs and other terrible shit: 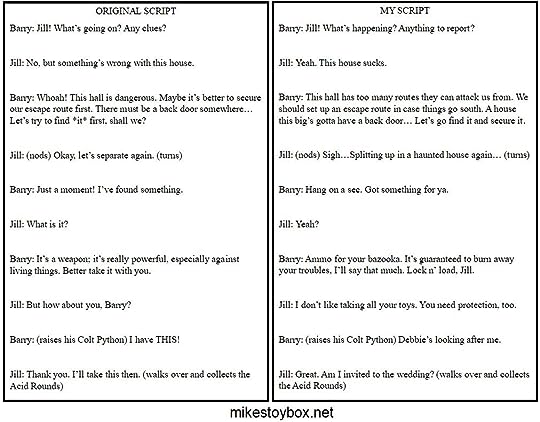 And that's how you localize a bad script!

Hi, Mike, I know next to nothing about the origins of Resident Evil, so I'm certainly not looking to pour scorn on your idea, but I'd be very, very careful about posting too much of that script (tweaked or otherwise) on your website. This is, unless you hold written authorization of copyright to do so?

I see you are a writer, so I'm sure you wouldn't appreciate someone taking your work and posting it freely on the web.
Like I say, this is not intended as a knock, just as food for thought.

David is right. You need to be very careful with copyrights. Here is a link to the copyright section of Capcom's websight.

Overall Capcom seems to be easy going, but they still maintain full authority over their property. Plus there may be others with actionable claims such as screen writers, distributors, voice actors, et al. If they think that you have profited, they can sue for a portion of your suspected profits. The legal costs can be catastrophic.

I mean, I'm using a script someone transcribed from playing the game, so it's not official in the first place. But still, considering copyright issues, and considering how most of the script is unnecessary stuff I didn't rewrite anyway, maybe I'll just share highlights instead.

You're crediting Resident Evil as the original source, so I would guess limited highlights would be covered by fair usage.
Best of luck, Mike.

Thanks. I'm mostly doing this for my writing portfolio anyway.

Check out the fair use rules, even if you can't post their full script, you may be able to post your own.