I picked this author because what is love without a little humor and I think she is one of the funny ones who does not seem to be as well known. 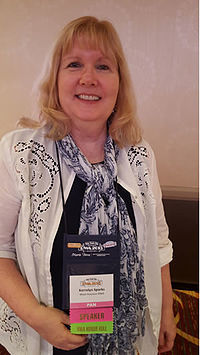 Bio taken from her webpage: http://www.kerrelynsparks.com/meet-ke...

Apparently, she has issues with reality. After writing 16 books about vampires and shifters, Kerrelyn has now completely gone off the deep end and wound up on another planet.

Although Kerrelyn is best known (so far) for the Love at Stake series, which has hit as high as number 5 on the New York Times list and 22 on the USA Today list, she hopes her readers will love The Embraced as much as they did her merry band of vamps and shifters.

Kerrelyn lives with her family in the Greater Houston area of Texas. You can visit with her on Goodreads or her Facebook page, where she does a monthly contest. On Twitter, she posts as @KerrelynSparks.

If you would like to receive bookmarks, bookplates, or other swag that is currently available, please send a self-addressed, stamped envelope. If you would like to order a signed book, please contact Katy Budget Books, and Kerrelyn will go there to sign them personally for you!

Kerrelyn Sparks is the New York Times bestselling author of the Love at Stake series.

Her next series, The Embraced is a new paranormal/fantasy romance series that is best described as Game of Thrones meets The Princess Bride. This world has two moons, and twice a year they eclipse (or embrace). A child born on the night the moons embrace will be gifted with a supernatural power. They are called the Embraced. Each of the five heroines is Embraced, so they all have a different kind of power. Of course, the heroes also have some awesome powers! So what can you expect? Action, adventure, suspense, spooky stuff, shifters, dragons, elves, witches, lots of laughs, and of course, plenty of romance!

She has also written two historical romance books. These two historical romantic comedies are set during the American Revolutionary War. Book one was first published as For Love or Country by Forge (MacMillan Publishing) in 2002, and it was Kerrelyn’s debut novel. It was revised and republished in 2012 by Avon Impulse (HarperCollins) under the title The Forbidden Lady. Set in Boston, it features a James Bond-like spy with time-appropriate spy gadgets. Book two Less Than a Gentleman, takes place during the Revolutionary War in South Carolina

I'm looking forward to the new one

I might have the last one of the Love at Stake series to read, I think. Enjoyed most of them very much, cause they were funny & light & fluffy. And sometimes that's just what you need.

I really liked her Love at Stake series. Am looking forward to her new one too. I think I'm second on the list for it at the library.

I love Kerrelyn Sparks, thank you for this thread as I didn't know she had a new series coming out. I will have to go book shopping, especially for her historical books I didn't know about either. Ladies, you all just made my day:)!

from the goodreads giveaway. I am super excited to read it!

I pre-ordered the kindle so it must be on there and I hadn't noticed :)