21 views
All Things Writing & Publishing > I’m new to self-publishing. What’s the competition like? Could I make enough to live on?

Thoughts? (I've rehashed some of my other posts, but I thought a complete post would be more efficient and effective.)

It’s conjectured that publishing a best seller is a crap shoot while on the opposite end it’s claimed that a quality story will win the day. As in most things, the truth lies somewhere in the middle. But what exactly is that middle path and how can it be characterized?

In this post, I’ll characterize the economic landscape of self-publishing. You could also make it big and land a mutually beneficial contract with a publisher or literary agent, but I won’t go into that here as there are a lot of articles about contracts and contract negotiations already out there (for example, see http://www.sfwa.org/other-resources/f... -- they also have other great resources covering self-publishing concerns as well).

The widespread adoption of ebooks began with the introduction of the Kindle and its accompanying self-publishing infrastructure in 2009. However, it wasn’t until recently that we’ve gained real insight into the self-publishing market with the free service, authorearnings.com, that in May 2016 compiled sales data on a record 1 million amazon titles. For better or worse, as of October 2015, Amazon had “74% of all US ebook purchases and 71% of all US consumer dollars spent on ebooks” (http://authorearnings.com/report/octo...). Therefore, for my purposes, Amazon sales data is a fairly good estimate of sales and income.

Note: authorearnings.com doesn’t compile a million titles every time they run a quarterly report; it was only in May 2016 that they performed that run in order to validate their previous data. They usually analyze about 200,000 titles with roughly the same validity.

Without further ado, let’s get to the data.

Note: Some of these writers do not make that much nor do they all compete in your genre, so don’t take these numbers and think that you’re competing against a little more than 294,000 authors. However, it does give you an idea of what you are up against. 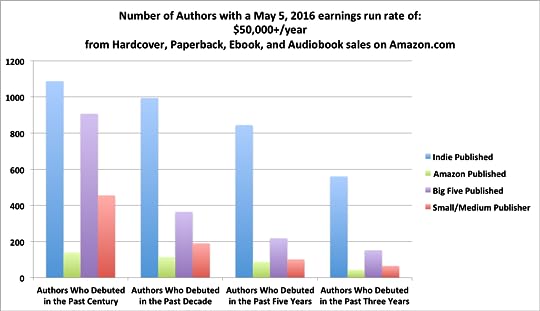 One observation that is worth pointing out is that out of all the authors who earn $50,000 and have debuted in the past 3 years, there are about 3 times as many self-published authors than the traditionally published. This point is important because purchasing books online is now 69% of all US book purchases. This statistic is good for self-published sales because self-published print books have a difficult time being distributed in brick and mortar bookstores. 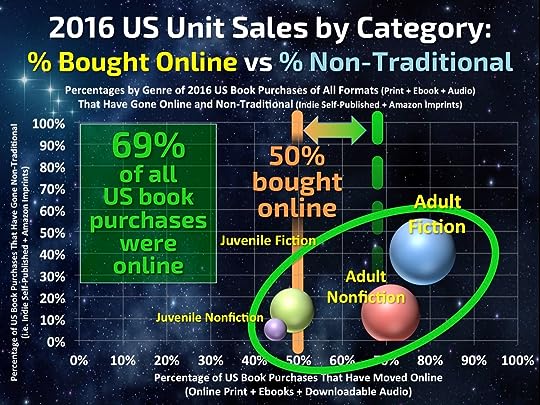 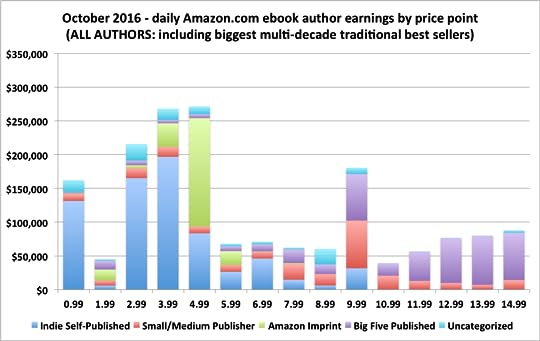 Now, what percentage of books are making annual sales of 16,667 copies? That would be a daily sales rate of about 46, which would place it around a ~5,000 overall kindle sales ranking according to the following chart:

Note: This chart does not include Amazon print sales. 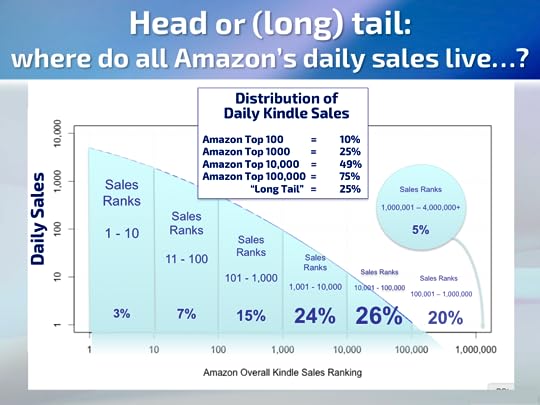 That means that your book needs to place in the top 37%. Looking at the percentage, it doesn’t seem too hard; on the other hand, only 2,500 authors make a living wage. In comparison, in May 2015, the US Bureau of Labor Statistics stated that nationwide there were 151,700 real estate agents making a mean annual salary of $58,410 (https://www.bls.gov/oes/current/oes41...). Yet, you might let out a sigh of relief that that 2,500 (or less, depending on your genre) is much fewer than 294,000. Also, the more books you have in the market, the more money you're generating. So, instead of needing one book selling 16,667 copies, you could have 2 books selling 8,334 copies each. Also a genre with a larger market capitalization than other genres could also mean that it's more competitive. The opportunity to make more money would attract more authors. You can use authorearnings.com data to find out how much money is being made in your genre and how many authors earning $50,000+ are in it. For example, authorearnings.com did that for the romance genre. Here’s the market cap for the romance genre: 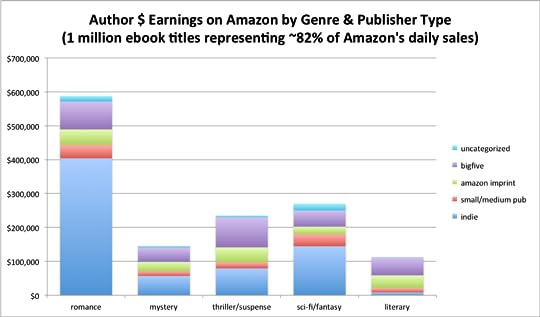 How much are romance authors earn and how many of them are there? 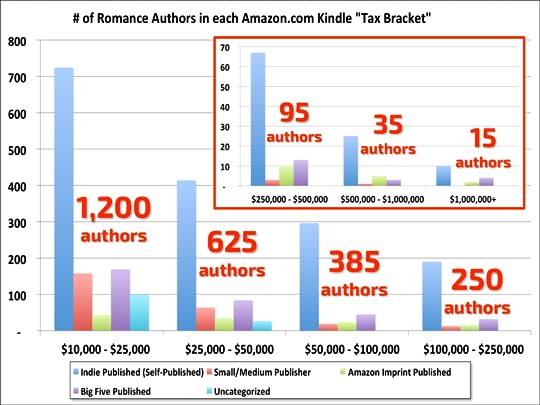 I'm not too sure when I'll get around to my next post, but when I do, I'll probably write about how to run an entrepreneurial author business and about analyzing the competition. Another thought occurred to me: licensing rights (of which the most well-known is film rights).

I'm lucky to be retired and have a substantial income. Plus I live in Germany where living is much cheaper than the US (where I'm from).

Good luck on your venture.

Thanks for the article - Yesterday was my 4th anniversary since publishing my first self-pub. I had high hopes of reads/sales - this just proves how difficult the market is unless, like other roles in life, you get very lucky.

The only thing I would add is that sales value does not equal income - there are still expenses like advertising, design, editing etc. to go against any income. It's one of the biggest hurdles to self-pub, what's the likely ROI for investing in professional levels in any of the support areas?

Great post Alex. Another thing that's hard to measure? The joy many of us get from writing and publishing ;)

I think of it as a fascinating experiment - my disappointments are as low as my expectations. The result is a great amount of pleasure and occasionally a modicum of success here and there. Not bad for now.

Tara Woods Turner wrote: "Great post Alex. Another thing that's hard to measure? The joy many of us get from writing and publishing ;)

I think of it as a fascinating experiment - my disappointments are as low as my expecta..."

I think a big step towards making it to the top ranks is be clear in the genre you write in and stick with it, putting out books regularly. I listened to an interview with Lee Child the other day and he said it is the long game, so as a writer plan to do that.

Alex, thanks a lot for this eloquent, systematized and well presented info! Gives really good picture of the things in the biz..
I liked the comparison with real-estate agents. Wonder whether similar data is available from other 'creative', artistic or sportive spheres.
We know there are thousands of professional footballers (I'm talking about soccer) making decent money, but many millions play the game in amateur teams. How many youtubers are making money, actors in Hollywood?
2500 out of 300K is less than 1%... Early disillusionment and knowing the odds are helpful to all those who plan to publish to manage expectations and/or take pragmatic rather than romantic approach to the whole thing..

Philip wrote: "Very true - I think a lot of self-pub write for fun certainly not profit"

i agree. the data in authorearnings.com supports that as well. i'll be sure to point that out in my next point.

Nik wrote: "We know there are thousands of professional footballers (I'm talking about soccer) making decent money, but many millions play the game in amateur teams. How many youtubers are making money, actors in Hollywood?"

pro-footballers would be a good example. my cousin was in the US Major League Baseball farm division and after a couple of years of not making the cut to the majors, he opted to become a coach, which he was able to accomplish. in other words, he couldn't make a living in the farm leagues. youtubers and musicians would also be good examples.

Philip wrote: "The only thing I would add is that sales value does not equal income - there are still expenses like advertising, design, editing etc. to go against any income. It's one of the biggest hurdles to self-pub, what's the likely ROI for investing in professional levels in any of the support areas?"

excellent point! i forgot about that: sales - expenses = net income. i'll add that in a later update.