This topic is about Fast One
10 views
Hamilton-esque books, authors.. > "Fast One" by Paul Cain

Mod
Is Fast One by Paul Cain in any way Hamilton-esque? You tell me. It was recommended to me by GoodReads because I'm reading March Violets by Philip Kerr. I must say it sounds pretty intriguing.... 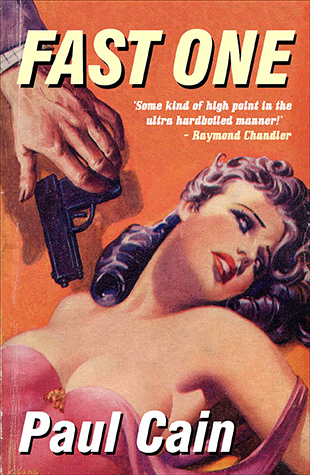 Fast One by Paul Cain

Paul Cain (1902-1966) earned his initial fame as a writer of short stories in the leading pulp magazine of the day, Black Mask. Cain published no stories after 1936, but continued his career as a B-film screenwriter into the late 1940's under the name "Peter Ruric." FYI: Another Black Mask writer, Carroll John Daly, wrote the first hard-boiled detective novel, The Snarl Of The Beast, in 1927.

Fast One is ranked as a noir classic. But why, and who would enjoy reading it? Fast One is rough, action-packed, terse, staccato. Paul Cain's only novel features simple, declarative sentences. Cain's direct prose effectively communicates the slam-bam violence that drives the story.

Blunt, quick, lean. Cain uses fewer conjunctions than any author I have read. This passage illustrates the point:

'The house-phone rang; Borg answered it, said, "Send him up," hung up. He said, "Faber," over his shoulder, went to the door.'

Cain generally uses the colon to introduce quotations. This convention, used by several pulp writers of the era, gives a more precise break, reinforcing the staccato rhythm of Cain's prose.

Cain knows Hollywood and Los Angeles. This is a prohibition-era account of corrupt L.A. politicians, cops on the take, warring underworld figures, and amoral lovers desperately trying to move ahead. This is a uniquely American tale, and could only have been written during the depths of the Depression. The prose doesn't flow like Hammett's, but Cain's terse dialog still sounds pretty good when read aloud. Cain uses no hyperbole, and this leanness holds up well.

Gambler and gunman Kells leads a desperate race against fate. He refuses to be messed with by anyone. Every chapter has double-crosses, car chases, black-mailings, two-fisted action, bombings, stabbings, or shootings. The violent pace is unrelenting. After 200 pages of turmoil and continued introduction of more characters whose primary function is to die, I was ready for something else. The furious pace was numbing.

The last chapters primarily concern Fells and his lover Granquist. Greater narrative power is achieved by focusing on the main characters and their fate. If there is any moral element in this tale of corruption and double-crossing, it is that Fells falls only when making a grab for the big score rather than purely seeking revenge against those who have wronged him.

Cain's terse style and manic pacing have perhaps never been topped. However, the introduction of too many stock characters and too many sub-plots weakens the appeal. Fast One is fun reading for those wanting to investigate the only published novel from an influential Black Mask writer. However, readers wanting insights into the motivation of the main characters will not be drawn into the story. Four stars based on the strengths of Cain's blunt style and the stunning noir conclusion.

I can't really say whether or not Cain could be described as Hamilton-esque [or even Hamilton-ish, for that matter] but he's very much well worth reading and his Fast One is certainly the suggested starting point. I'd put him firmly in league with Hammet and Chandler as one of the best.

Philip Kerr gets my enthusiastic endorsement as well. I read his March Violets as the first third of a compendium published years ago by Penguin UK, titled Berlin Noir, which collected March Violets, The Pale Criminal and A German Requiem. Value for money and a bargain at any price.

Mod
That'll do me Mark. With your endorsement uppermost in my mind, I have just ordered a copy of Fast One by Paul Cain

If you find it agreeable, you could do worse than follow it with his Seven Slayers, which is also available as a compendium coupled with Fast One.

Mod
If there's a better hard boiled novel than 'Fast One' out there, I'm still looking for it....


...so says Max Décharné in this book's introduction.

I'm poised to find out

Mod
Well, I've read the first chapter twice now and I am still confused about what the heck is going on. I'm guessing the plot isn't the point? Or is it? I like the style but the lack of explanation or exposition is a little disorientating. Interesting that Mark makes the Chandler comparison, and the cover reckons that Chandler states this book was "a high point in the ultra hardboiled manner" but, right now, having read the first 38 pages twice, it's just leaving me confused, which has never been something I have experienced with Chandler's sublime books. That said I quite like the all action style and clipped, terse dialogue. I'm just hoping the fog rises a bit in chapter two.

Mod
What a disappointment. 'Fast One' by Paul Cain was most definitely not my cup of Earl Grey...


Nigeyb wrote: "Is Fast One by Paul Cain in any way Hamilton-esque?"

Not in the slightest. Worse, it's not Chandler-esque either.

Nigeyb wrote: "What a disappointment. 'Fast One' by Paul Cain was most definitely not my cup of Earl Grey... Newcomer Patrick Murtha here, hailing from Queretaro, Mexico. As it happens, I just finished reading Fast One, and I also found it problematic. Here is what I posted at LibraryThing:

I am a huge fan of classic hard-boiled fiction, but damn, this is just impenetrable, full of passages like this:

--"Listen. Doc went to Perry's to see me...What for? I was with Jack Rose being propositioned to come in with him and Doc, on the Joanna. They're evidently figuring Fay and Hesse to make things tough and wanted me for a flash."--

--"Rose called Eddie O'Donnell and me after you left him this afternoon. He said Dave Perry had called while you were there - told him that Doc was at the joint in Hollywood waiting for you...Perry knew Rose was going to have Doc bumped - an' he knew Rose wanted to frame it for you...It looked like a good play."--

Hello, come again? Since there are no characters in this novel, only ciphers with names attached, all of this is literally impossible to follow. Although written in apparently grammatical English sentences, it might as well be Basque for all the sense one can make of it. "Fast One" has an abstract quality that some readers have championed, but I have not been able to get into it.

UPDATE: The bleak final chapter is memorable and gooses the rating a half-point. (2 1/2 out of 5)

Mod
Welcome Patrick Murtha. I am pleased to note it was not just me who struggled with Fast One. I agree that the final chapter redeemed the book a tad.