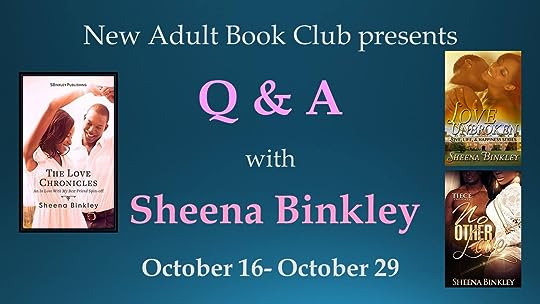 Welcome to a fantastic Q&A with Sheena Binkley! Sheena is the author of such books as In Love With My Best Friend, Something Just Ain't Right, One Shot With A Baller, Love Unbroken and many more you can find HERE.

Please leave your questions for Sheena below!

Hi Sheena, What inspired you to start writing?

Which book has been the most difficult to write so far?

Hi Latifa! I started writing when I was 9 for a class project at school. I loved it so much that I started to do more of it and it later became a hobby. I was (still am) an avid reader, so when I was growing up, books like the Baby-Sitter's Club and Sweet Valley High were big influences for me and my writing.

Hi M! The most difficult book to write was probably my latest, because I didn't know how readers would react to it. It's sort of based from actual events, so I didn't think if readers would get the concept of the story.

How do you get your inspiration to write?

Hi Sheena, Welcome to NABC. If you could spend a day with one of your characters who and why? Is their a character you would rather never meet?

How do you get your inspiration to write?

Hi Amber! For most of my books, I get my inspiration from actual events. I love the new adult genre, so for my Love, Life, & Happiness, series, I wanted to write a series that focus on a group of friends who goes through a lot together. I used serveral of my friends' characteristics to create the characters from the series. I enjoyed writing each book from the series, which became one of my most popular series.

Nicola wrote: "Hi Sheena, Welcome to NABC. If you could spend a day with one of your characters who and why? Is their a character you would rather never meet?"

Hi Nicola! Thank you so much! This is a tough question, because I love all of characters. But the character I would spend a day with is Riana from the Love, Life, & Happiness series. We both similar in our personalities, and she's a writer.

The character I would never want to meet is Shelby from the In Love With My Best Friend series. She's someone that you love to hate because she's nosy and just plain mean, lol.

My go to question: what is your all time favorite book and author?

My go to question: what is your all time favorite book and author?"

Hi Stephanie! Wow, I have a lot of favorite books, but I think my all-time favorite (in new adult) would have to be The Edge of Never by J.A Redmerski. I experienced every emotion when I read that story, which I believe every book should have for readers.

What was the best and worst scene you wrote?

Do you read any nonfiction books? If so, any favorites you can recommend?

Kristal wrote: "What was the best and worst scene you wrote?"

The best scene I wrote would have to be the poetry scenes from Love Unbroken. This was one of my first books, but it's still one of my most popular books. For me, I'm love poetry, so being able to incorporate it into my story was amazing.

I also have to say the final scene in The Love Chronicles came in a close second. This was the graduation scene between the main characters (Andie & Dexter), where Dexter declared his love for Andie in front of the entire graduating class. The scene is sweet and just romantic.

The worst scene I wrote would have to be the flashback scene from A Chance at Love. It was scene in which the main character (Tia) was talking to her boyfriend, Charles, about her mother, who passed away from cancer. It wasn't a bad scene, it was just too sad for me because it really hit close to home. I think was crying for hours after I wrote that scene.

Irene wrote: "Do you read any nonfiction books? If so, any favorites you can recommend?"

Hi Irene! I have not read any nonfiction books; I would like to, though. One in particular that caught my eye is Taking Flight by Michaela DePrince. Michaela, who was living in an orphanage in Sierra Leone, overcame diversity as she was adopted by an American family. She went on to study at the Jacqueline Kennedy Onassis School at the American Ballet Theatre and is now the youngest principal dancer with the Dance Theatre of Harlem. I downloaded the book, I just haven't read it yet, but I will soon.

When did you start writing?

Hi Sheena! Besides actual events and people you know, what other types of research do you do for your books? For instance, do you travel to get ideas for the locations in your books? Is there any music that you listen to while writing that gives you inspiration for your characters and do you have a playlist? By the way, I love your book covers!

If you could be any book character for a day - who would you choose and why?

Do you listen to music whemn you write? Do you have a playlist to go with your books?

Hi Sheena :) What was the hardest thing about writing your latest book? Thank you!

Nicole wrote: "When did you start writing?"

Hi Nicole! I started writing when I was 9 for a class project. I loved doing the story that I decided to continue writing. Although I was only doing it as a hobby, I decided to pursue a career three years ago when I released my novella, In Love With My Best Friend. :-)

Tanja wrote: "Hi Sheena! Besides actual events and people you know, what other types of research do you do for your books? For instance, do you travel to get ideas for the locations in your books? Is there any m..."

Hi Tanya! Thank you so much! For my stories, I try to do as much research as possible to make the story accurate; but I do get a lot of inspiration from various locations. I could be at work and start thinking about a scene that I could use there or going to the park and write a scene about my characters in the park. So I could be anywhere and be inspired, lol.

As for music, that is a huge part for me to find inspiration. I have to listen to music while writing. There have been various scenes in my books that were centered around a certain song (especially in the Love, Life, & Happiness series, and The Love Chronicles). Majority of my books does have playlists, which are available on Spotify. :-)

J. wrote: "If you could be any book character for a day - who would you choose and why?"

Hi J! If I could be any book character for a day, it would have to Riana from the Love, Life, & Happiness series. With her, I kind of put some of personality in her because she has been through a lot, but was able to overcome them to be the strong woman that she is today. That, and she's an author, so I can pretty much relate to her. :-)

Nicole wrote: "Do you listen to music whemn you write? Do you have a playlist to go with your books?"

Hi Nicole! For me, music is a necessity for me when writing. I have to have my earphones in listening to all of my playlists on Spotify. I do also have playlists for majority of my books.

Irma wrote: "Hi Sheena :) What was the hardest thing about writing your latest book? Thank you!"

Hi Irma! The hardest thing about writing my latest book is that it was sort of based on personal experiences from my job. While writing certain scenes, I was wondering, will anyone from work read this story, lol. I was also a bit concerned to how readers would react to this story. I sort of went out of the box with the storyline, so I was very nervous when the story was released.