This topic is about Shock and Awe
11 views
Hamilton-esque books, authors.. > "Shock and Awe: Glam Rock and Its Legacy, from the Seventies to the Twenty-first Century" by Simon Reynolds

Mod
A thread to discuss Shock and Awe: Glam Rock and Its Legacy, from the Seventies to the Twenty-first Century by Simon Reynolds.


Does for glam rock what his 2006 book, Rip It Up and Start Again, did for post punk. Impeccable journalism (Mojo 4****)

A panoramic and appropriately dazzling history of glam (Uncut 9/10)

Shock & Awe is a carefully calibrated celebration of that most shiny, brilliant, seedy, decadent and subversive of all pop genres (Shindig 5*****)

His best work yet. Beautifully researched and written this is a book that changes perceptions and sets glam in its rightful place (Louder Than War 10/10)

A definitive, smart and celebratory account of glam (Loud and Quiet)

Reynolds is one of our very best writers and Shock & Awe a crucial read. (Prog Magazine) 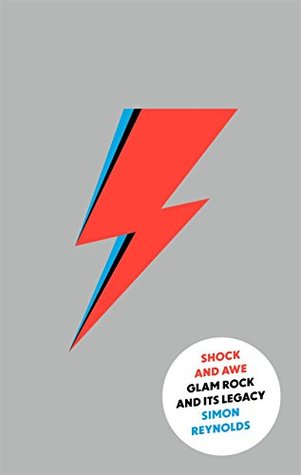 Mod
Mark wrote: "Unfortunately for the wallet, this forthcoming book has just been brought to my attention..."

I know, I know. I'll probably wait & suggest to a relative that they buy me Shock and Awe: Glam Rock and Its Legacy, from the Seventies to the Twenty-first Century for a Xmas present - which would doubtless make me very happy. I've enjoyed other books by Simon Reynolds, so feel sure he'll deliver with this one.

It's quite an odd twist on the way these things normally work, but next week sees a stateside publication of Shock & Awe in paperback release, priced at only twelve bucks, and can be pre-ordered here:

Mod
Interesting. Thanks Mark. No listing for a paperback edition here in dear old Blighty. V excited about reading this book.

I'm perfectly willing to barter for rolls of Parma Violet!

Mod
I think we can do business

Nice resource! I had the devil of a time trying to find those last year in London, as nobody seems to stock them.

Mod
My rolling review (and after the first four chapters)....


'Shock and Awe: Glam Rock and Its Legacy' by Simon Reynolds

Almost 700 pages devoted to Glam Rock? Are you sure Simon Reynolds? I'd already heard from a fellow Glam devotee (our very own Mark!), whose opinion I respect, that 'Shock and Awe: Glam Rock and Its Legacy' was a big boring yawn which over intellectualises the simple pleasures of Glam. On the other hand, I had really enjoyed a couple of previous Simon Reynolds' tomes - Energy Flash: A Journey Through Rave Music and Dance Culture and Rip it Up and Start Again - which augured well.

Turns out (or so I think after four chapters) I am still attracted to Simon Reynolds's cerebral approach and the inevitable chin-stroking that accompanies his research, deep thinking, and exhilarating insights. That said, for all his intellectualism, there is also the unmistakeable enthusiasm of his younger self. Like me, Reynolds was a pre-teen in the early 1970s and so was equally caught up in one of the most exciting, flashiest, primal genres in pop music's short history. I loved Glam then. I still love it now. I am squarely the target audience for this kind of book.

Chapter 1 “Boogie Poet” is devoted to the rise of Marc Bolan and is a good way to start, and a good read. I always like reading about the London mod scene and the London hippy underground so that was a plus. Some sections are a tad sonorous and overly academic, but Simon Reynolds absolutely nails Marc Bolan’s transformation from Mod/Psych (in John’s Children) to underground favourite (in Tyrannosaurus Rex) to fully fledged teen idol despite, arguably, being somewhat limited in many ways. How did he do it? A mix of contacts and collaborators, opportunism, drive and ambition, and - above all - charisma, all combined at the exact moment a new pre-teen generation was hankering for exactly what he delivered. All of this is brilliantly described and deconstructed. Over the years I’ve read a heck of a lot of stuff about Marc Bolan and yet I still discovered some new details.

As I approached Chapter 2 “The London Boy - Bowie’s Early Years”, and as a lifelong Bowie fan, I wondered if I'd discover any new insights or information. Well, I'd never considered the Mahayana branch of Tibetan Buddhism to have been much of an influence before. Plus how, ultimately, Bowie's hotchpotch of early philosophical ideas coalesced into the winning strategy of "rebranding" (as we'd call it now) and just how radical (and inauthentic) changing your image and sound with each album release was in the early 1970s.

Chapter 3 "Elected" gives some well deserved recognition to Alice Cooper over in the USA. I've often ideally wondered the extent to which Bowie and Alice Cooper might have influenced each other in 1970-72 given many of the similarities (make up, theatrics, cross dressing etc.) which is something that Reynolds addresses. The answer is not much if at all, which is hardly surprising, it was just a coincidence as artists like Bowie and Cooper tried to create something new and which signalled a clean break from the previous decade. Both entered the 1070s releasing music that was behind the curve and playing catch up but, with in a year or two, both were defining a new sound, scene and style. What's also great about this chapter is how Reynolds places Alice Cooper in many earlier traditions...Grand Guignol, Dada, Surrealism, & of course shock theatrics. Alice Cooper aside, why did British rock, from the start, have a stronger propensity for theatrics? The lack of a natural ready made rock n roll circuit meant the faddish new groups were often sharing variety bills on the old music hall circuit. The groups had to learn be entertaining, and they also picked up tricks and stage skills from observing professional all-round entertainers.

Chapter 4 “Teenage Rampage” is the glam scene I knew and loved as a young child through Top Of The Pops, and the pages of Disco 45, Music Star and my sister’s Jackie magazine. Reynolds celebrates the glory of Chinnichap, Slade, Sweet, Mud, Suzi Q, Gary Glitter, the Glitter Band, Hello, Jook via Bell Records, Mickie Most, RAK, and pleasingly, the latterday world of Junkshop Glam. A great chapter. The detailed description of the creation of 'Rock n Roll Part 2' is worth the price of admission alone, and good to read recognition for Gary Glitter and Mike Leander’s music but also tackling, head on, his sexual abuse of minors… “in one foul swoop, Glitter managed to wipe out his achievements and poison the substantial reservoir of public affection he’d earned as an entertainer and symbol of the British seventies”.

Mod
I’ve finished 'Shock and Awe: Glam Rock and Its Legacy' by Simon Reynolds. It hasn’t displaced Dave Thompson’s 'Children of the Revolution: The Glam Rock Story 1970-1975’ as the ultimate encyclopaedia of Glam...