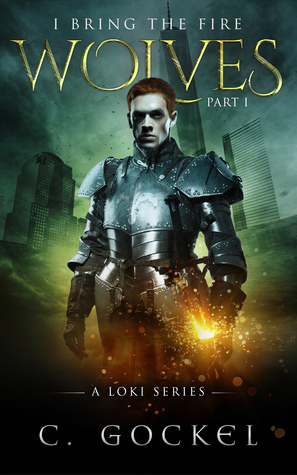 In the middle of America, on Route 44, Amy Lewis has a plan — to get to her grandma’s house in time for dinner. Galaxies away Loki is waking up in a prison cell, strangely without a hangover, and with no idea what he’s done wrong — this time anyway. But he does know Thor is hiding something, Odin is up to something wicked, and there seems to be something he’s forgotten...

In this tale that is equal parts “Another Fine Myth,” “American Gods,” and “Once Upon a Time,” a very nice midwestern girl and a jaded, still very mischievous Loki must join forces to outwit gods, elves, magic sniffing cats, and nosy neighbors. If Loki can remember exactly what he’s forgotten and Amy can convince him not to be too distracted by Earthly gadgets, her boobs, or three day benders, they just might pull it off...

This first volume of "I Bring the Fire" is for anyone who suspects chaos and mischief makers might have their own redeeming qualities, and anyone who just wants a good fantasy romp through modern Earth, ancient Asgard, and beyond!

ARE YOU READING WOLVES? Shout it out in the discussion thread below, find some Book Buddies to read along, and discuss what you think as you read your way through the book. Just remember to be kind please and use the spoiler .html so you don't ruin the fun for somebody who's not as far along.

This will be a great excuse to finally start this one. I've had it on my "Want to Read" shelf for ages!

I'm in! I've had this book waiting on my Kindle long enough. This is officially my motivation to actually read it.

Mod
I just grabbed it. It sounds fascinating.

Can't wait to read this! Thanks!

I just finished this bookI Bring the Fire: Part I Wolves i liked it but I'm not much into Viking myths to that was a factor for me. I did like it but I felt like I didn't know enough backround of the Viking myths so felt lost some of the time

I just finished this book and i gave it 4 stars. I liked it alright but I'm not into Viking mythology so I felt lost quite a bit.

I just finished reading this without realizing the group was reading it! Exciting! I found it a little slow to start, and it melded some Marvel with some actual myth, but overall it was enjoyable. Loki was my favourite part and he's what makes me want to keep going with the series.