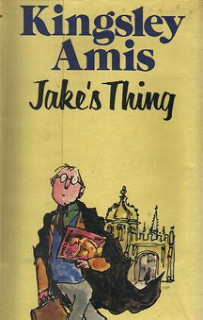 Nearing sixty, Jake goes in pursuit of his lost libido. But is sex really worth it? As liberationists abuse him; a hostess bores him into bed; and even his wife starts acting oddly, Jake seriously begins to wonder.

Has anyone in this group read this ? It looks decidedly odd, but I am almost tempted to get it from the library just to skim read a few pages.

Yes, I've read Jake's Thing. If I were ranking the 1978 shortlisted novels, Jake's Thing would be #6. I do plan on rereading it, or at least skimming through it again. It seems to have been intended as a reflection upon the insecurities and disappointments of middle-aged men, perhaps a 1978 All That A Middle-Aged Man Is. Reading Jake's Thing made me grateful that I'm no longer a middle-aged man.

Mod
I have been making my way through Amis's work since NYRB Classics republished eight of his novels a few years back. Jake's Thing wasn't one they republished, either because they didn't get the rights or didn't have the desire. That leaves me wary as I like to use NYRB Classics as my curator. But the original cover features art by Quentin Blake, so it's got that going for it.

I've just finished this, and while it's fine for what it is, I cannot understand how anyone would have come to the conclusion that it deserved to be on the shortlist of the best books published in 1978. It seemed very small and unambitious to me, particularly compared with the four others I've read, two of which are much shorter and yet get into much more complicated and interesting territory.

Unless the Brink turns out truly insipid in some way, this will be a distant sixth out of six.

Trevor, my guess is that NYRB may have curated Jake's Thing right out of their republication list.

Nicole, I agree that it's a distant sixth. My only caveat is that I wonder if my reaction to may result from how distasteful I found Jake Richardson and how uninterested I was in the status of his thing.

Dan wrote: "My only caveat is that I wonder if my reaction to may result from how distasteful I found Jake Richardson and how uninterested I was in the status of his thing."

I appear to be the only reader on the planet who did not actively dislike Jake Richardson. I actually felt a bit sorry for him (though I wouldn't invite him to dinner any time soon), and understood his desire to be left more or less alone*.

I think the real problem is, whether you like him or not, the book is mediocre. It's not as funny as it's meant to be, but it's not really serious either, and the issues it does get into it wades barely into the toes wet shallows. The writing isn't bad or anything, but there's also nothing there to marvel at. As far as I can tell, nothing at all distinguishes this book from the millions of middle of the pack just ok titles that are published every year, and I don't understand how the book ended up on the shortlist.


*I couldn't make it so far as to care about the status of his thing, though.

I'm about to embark on Jake's Thing, but having read Amis previously I suspect I know what I'm in for.
Discussion of Kingsley Amis gives me the chance to reproduce an extract from his memoirs. The academic life he lived and fellow notables he encountered could have been introduced into many of his novels.
This is a favourite of mine (apologies to those who know this already) and describes a meeting, or clash, of intellects; this one involves a dinner party seated opposite Enoch Powell:
Amis "there's obviously going to be considerable impingement in the Middle Eastern countries"
Powell showed a lively interest. 'Impingement, Mr Amis', he said. 'May I ask you: whence do you derive that word?'
'well now, Latin impingo, impingere, impinxi, impinctum, "I shade in", I said, never having come across such verb in my life, but feeling I was doing pretty well for ten o'clock or so.
"Alas, no, Mr Amis, said Powell, shaking his head regretfully, but smiling in appreciation of a nice try. impingo, impingere, impaxi, impactum"I strike.... a blow", and he struck one, quite a hard one of fist into palm.
'I obviously must concede the point to you, Mr Powell', I said, feeling like someone in a costume drama.
'Yes, I think you must'

I hope Jake's Thing has some similar comedic anecdotes...

That anecdote is definitely funnier than anything in Jake's Thing.

Dan, above, makes a reference to 2016's All that man Is, and I agree that a comparison with Jake's thing is relevant.

This is my review

Jake's Thing is a book ostensibly about sexual inadequacy. It is a book that offers Kingsley Amis another opportunity to lay down his version of Men are from Mars and Women from Venus. Jake's Thing is not unreasonably summarised by most reviewers as a straight misogynistic polemic (one of many from Amis senior).
I would have thought that in 1978 it was a bit soon to hang another book around the male sex drive, less than ten years after Philip Roth's 1969 (stronger) version in Portnoy's Complaint.
Jake's Thing does, at least give some space to a thoughtfully expressed retort from a woman's perspective. It also has some cleverly written, ironic, very amusing observations- when not focused on sex or women;
e.g. referring to dining out: "The food wasn't much good and they were rather nasty to you, but then it cost quite a lot" p91

Strip out the infantile sex set pieces and the battle of the sexes narrative isn't quite as dated as it first appears. The book's analysis of a certain type of 1978 male psyche and of role of women in a man's world, certainly reflects accurately a strand of opinion both then and now. Some bastions of male separateness have always, and continue to be, populated by Jakes. Amis himself lived a life not far removed from the Gentlemens clubs and colleges of 18th century Britain.

A Google search in 2016 for "Gentlemens Clubs" reveals their continued existence in London in some numbers (Brooks, Boodles, Carlton, Garrick, among others). Jake is also present throughout the British Isles in the male only bars and memberships of a significant number of golf Clubs. (Take a recent bow Troon and Muirfield). In America a "Gentleman's Club" search lists predominantly strip clubs, so I imagine that to American readers the picture portrayed by Kingsley Amis, of quintessentially British chauvinism, mostly comes across as a laughable fantasy; a farce, a spoof. (Augusta National patrons excepted).

Jake's musings on females throughout Jake's Thing (good examples pages 213 and 269 (last page)), do seem dated and anachronistic in the Britain of 2016, but pockets of this 1970's train of thought do continue to exist.
My three stars reflects my view that it's not a novel to stir strong emotions. I am surprised that Amis subsequently won the Booker prize, and that he continues to be highly rated in the pantheon of British writers since 1945.