39 views
HISTORY OF RELIGIONS > ARCHIVE - AUGUST 2016 - SPOILER THREAD - If the Oceans Were Ink: An Unlikely Friendship and a Journey to the Heart of the Quran

This is the spoiler thread for the book IF THE OCEANS WERE INK: AN UNLIKELY FRIENDSHIP AND A JOURNET TO THE HEART OF THE QURAN by Carla Power

There are articles/videos/interviews etc. which deal with this book that I am setting up a thread to add any of these items to.

Please feel free to add your own. If you cite any book or author aside from the book being discussed - you have to add the proper citation, book cover, author's photo and author's link.

Muslims Go to Catholic Mass Across France, Italy to Show Solidarity
by The Associated Press 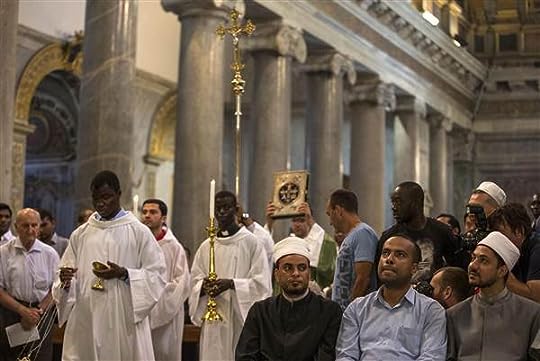 Members of the congregation of Santa Maria Trastevere in Rome during a multifaith service Sunday organized by Italy's Islamic Religious Community.

ROUEN, France — In a gesture of solidarity following the gruesome killing of a French priest, Muslims on Sunday attended Catholic Mass in churches and cathedrals across France and Italy.

An Associated Press reporter at the scene said that a few dozen Muslims gathered at the towering Gothic cathedral in Rouen, near Saint-Etienne-du-Rouvray where the 85-year-old Rev. Jacques Hamel had his throat slit by two teenage Muslim fanatics on Tuesday.

"We are very moved by the presence of our Muslim friends, and I believe it is a courageous act that they did by coming to us," Dominique Lebrun, the archbishop of Rouen, said after the service.

Members of the congregation of Santa Maria Trastevere in Rome during a multi faith service Sunday organ..."

Published on Apr 14, 2015
Journalist Carla Power talks with her friend..."


Excellent interaction and who does not love the Strand.

Mod
A year with the Quran:

Syrian women burn burqas in celebration after being freed from Isis

Syrian women have been filmed burning the burqas Isis forced them to wear, in a celebration of the militants being driven out.

“Damn this stupid invention that they made us wear,” one woman said as she set light to the black garment. “We’re humans, we have our freedom.”

In the video, released by the Kurdish Anha news agency, a crowd of women and children cheered as the fabric went up in flames in the city of Manbij.

You are welcome, Teri!

Donna wrote: "Here are links to two articles. The first is about a proposed law to ban burqas in Germany. The second is about some seaside cities in France that have banned burkinis following the Nice attack.

Those links aren't valid. I keep getting "Page not Found."

I'm sorry, Michele. They worked earlier. Let me see if I can get them up again.

I was unable to get the previous links to work, but I am posting links to two newer articles. The first one below discusses where Germany is now on the issue of banning the burka. It would appear that they are seeking a partial ban in public places such as schools, government offices, etc. The second article is a fascinating discussion of the burkini bans in France. It looks at the issue historically and culturally and illuminates the complexities of the controversy over traditional Muslim dress - thought provoking.

That happens sometimes, Donna. Thanks for the new links!

The New York Times Opinion Page weighs in on the burkini ban:

If the Oceans Were Ink: An Unlikely Friendship and a Journey to the Heart of the Quran (other topics)