28 views
R2R Read-to-Review Program > R2R: INTO THE OUT (YA space opera adventure)-10 copies

My new space opera adventure, Into the Out, will be published on August 6, but I'm offering ARC's to people willing to review it now. 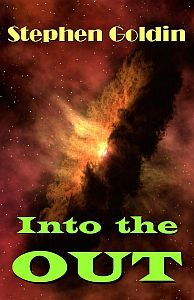 Tamara Ruben and ten of her high school classmates are on a field trip in the California desert when they stumble across a long-dormant spaceship. Without warning, the ship takes off with them aboard, stranding them alone in interstellar space with no idea where they're going or what they must do when they get there.

Now they must figure out the ship's workings to keep themselves alive... and Tamara realizes her mind is being taken over by a set of alien Voices that may or may not be trying to help her. Can the inexperienced teenage crew learn to cooperate to solve the unprecedented challenges they'll face on their historic journey?

I can provide ebook copies in your choice of EPUB, MOBI, or PDF formats. Just PM me your email address and I'll send the copy along.

Thanks for your interest, and pleasant reading!

I would be interested in reading a copy and providing a review.

Lizzie wrote: "I would be interested in reading a copy and providing a review."

You should have it by now. Enjoy!

Ky--the information should be in your message inbox.

It was a good story and I enjoyed it. I posted my review here

Into the Out by Stephen Goldin


I really liked this book. It was fun; it reminded me of stories i read in my early teens when I discovered science fiction - Heinlein, Norton - combined with The Goonies. The basic story is a group of teens accidentally enter an alien space ship which attempts to fulfill its previous mission. The "computer" bonds itself to Tamara through the persona of its prior captain and the teens learn to operate it enough to survive in space and discover its origins. It's a mixed group of teens (popular, nerd, athlete, scientist, language arts, new kid in school) who through forced time together discover themselves and each other. It was not overly complicated, simply a good story with kids succeeding. I liked the way it was presented as letters to Tamara's sister updating her on Tamara's life.

I did have two issues that detracted from the story:
1. Tamara's conversation style didn't feel realistic and annoyed me at the beginning of the story. I eventually tuned out all the "likes".
2. The discussion of sex in which there is explicit descriptions of options aside from intercourse. While I would wish teenagers would be frank and aware of sexual choices that avoid pregnancy risk, they don't. Tamara describes acts with the boy she eventually becomes involved with and it was TMI. I think this level of frankness on teenage sex could preclude many readers from purchasing it to read themselves or to gift to a teen.

If not for the above 2 issues, I would have given this book 4 stars. It's a solid science fiction story targeted toward teens, but an enjoyable read for all.

I received this book for free as part of the R2R program.


and I posted my review in Amazon and B&N. I couldn't find the book listed in The Reading Room but if you add it I will put my review there. If there are any other venues authors would like to have reviews posted or other readers think are useful, please let me know.

Lizzie wrote: "It was a good story and I enjoyed it. I posted my review here

Into the Out by Stephen Goldin
My rating: 3 of 5 stars
I really liked this book. It was fun; it reminded me of stories i read in my..."

Please educate me, Lizzie. What is The Reading Room, and how does one get listed there? Thank you for the good review--and for the favorable comparison with Heinlein and Norton, two of the great influences on my young life.