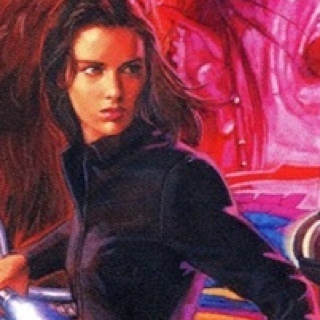 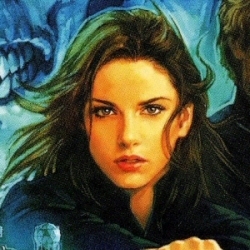 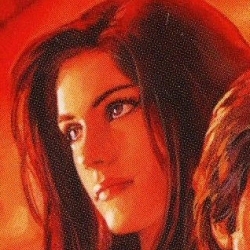 Jaina, named after Han's mother, is born five minutes before her brother Jacen. The twins, and eventually their younger brother, live at various safe havens for their first few years under the protection of Leia's handmaiden Winter.

Jaina helps her brother defend their unconscious uncle from the spirit of Sith Lord Exar Kun. In Vonda McIntyre's The Crystal Star Jaina is kidnapped and used in a plot, along with her siblings, to take advantage of their Force powers., Jaina is again kidnapped but escapes. Jaina becomes a major character in Young Jedi Knights as Jaina and Jacen begin their Jedi training. While the New Jedi Order called her "Sword of the Jedi" and the Rogue Squadron pilots nicknamed her "Sticks", and she was refereed to as the "Trickster Goddess, Yun-Harla" by the Yuuzhan Vong invaders. The death of her younger brother Anakin, who died during the "Mission to Myrkr" caused her to walk very close to the Dark Side of the Force, but with the help of Jedi Knight Kyp Durron, who became her new master, she was redeemed.

It seems quote evident that Jaina inherited her grand mother Mara's strength within all aspect. Jaina is a fast learner, highly intelligent very strict and structured but all the same can be reckless when it comes to family matters. She's very skilled in flying and her ability to give orders has been known to get carried away fairly easily. All it takes is a gentle reminder.

Jaina is the eldest daughter of Leia Organa and Han Solo. She is the twin to Jacen Solo and older sister to Anakin Solo. Neice to Luke Skywalker and curren Padawon.

I'm sorry but this character has been withdrawn, Thank You.

Mod
there will be a new template. the necessary works will be excluded.

only main necessities are history and personality and skills and stuff.
at least 2 paragraphs each.
no god mod please. thanks

Height: 5' 9"
Weight: 120 lbs.
Eyes: blue
Greatest flaw: Can sometimes be easily distracted or indecisive.
Best quality: He is kind and patient and willing to help anyone in need.
Goals: To protect the galaxy from those who wish it harm, and to teach the next generation.

Appearance: Green skin, saucer-shaped antennae, pointed ears, elongated snout, blue eyes. Wears white robes, a brown belt with pouches, boots, and ceremonial cloak.
Personality: Quiet, though not shy. Dante is very calm and laid-back. He just fine on his own, or with other people. He takes things as they come and makes do with what he has.
Strengths: Martial Arts, Puzzles
Weaknesses: Sometimes he struggles to harness the force, leadership
Fears: Failing his duty to protect those in danger.
Likes: Reading, Sketching, Martial Arts
Dislikes: Being made the center of attention

History
Childhood: He was born on Rodia, and after it was discovered that he was force-sensitive, his mother and father brought him to the Jedi Temple on Coruscant to learn to use this ability.
Teen years: He trained as a padawan until he turned 20 and trained in the force, with a lightsaber, and martial arts
Adulthood: At twenty years of age, Dante was promoted to Jedi Knight. He took on an apprentice, (Can be anybody's character if they want), He has traveled to many planets to solve many disputes in his lifetime, but has never been involved in large conflicts.

Weapons: His mind, his body, and a blue lightsaber with a metallic black hilt. The lightsaber has a series of blue lights down the side, activated by a button. It is specially crafted for Rodian hands and thus uncomfortable to other species. It is also only able to be activated by the force.

What is it you are looking for?

Mod
enhancement.
and please request to be a jedi knight before making one

Please define what you mean by enhancement. What do you want? Longer paragraphs?

And may I play a Jedi Knight?

Mod
Please provide a detailed role-play.
it just doesn't flow. give it more detail.
this is advanced

this determine wehter or not you can be one.