As the wonderful "Journey's End" by R.C. Sherriff got very little take up as a Group Read fiction nomination (for August 2016), and because I feel very passionately about its merits, I have set it up as a hot read for anyone who feels inspired to read and discuss it…...

"Journey's End" - R.C. Sherriff’s very short (96 page), 1928 play is about a group of officers in the trenches shortly in France before a German offensive in WW1. It’s very much of its time, and yet remains profoundly moving.

R.C. Sherriff wrote the play based on his own experiences, and appears to have no particular axe to grind - neither anti-war, nor patriotic - with its primary focus on the toll placed on the young officers and the working class soldiers thrown into such a horrific situation.

Raleigh, a new eighteen-year-old officer fresh out of English public school, joins the besieged company of his friend and cricketing hero Stanhope, and finds him dramatically changed.

Laurence Olivier starred as Stanhope in the first performance of Journey's End in 1928; the play was an instant stage success and remains a remarkable anti-war classic.

It's a very short play (a mere 96 pages) but with absolutely loads of stuff to discuss. Where it really scores is in the psychological damage done to the officers. The stiff upper lip mentality meant that stress was alluded to more than openly discussed, and, for one character, a bottle of whiskey a night was essential to being able to cope.

Hailed by George Bernard Shaw as 'useful [corrective] to the romantic conception of war', R.C. Sherriff's "Journey's End" is an unflinching vision of life in the trenches towards the end of the First World War, published in "Penguin Classics". 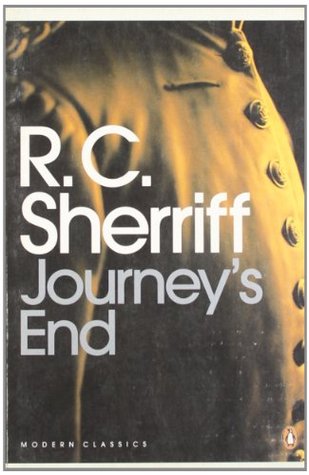 Here's what I wrote after finishing it.


"Journey's End" - R.C. Sherriff’s short (96 page), 1928 play about a group of officers in the trenches shortly before a German offensive - is very much of its time, and yet remains profoundly moving.

R.C. Sherriff wrote the play based on his own experiences, and appears to have no particular axe to grind - neither anti-war, nor patriotic - with its primary focus on the toll placed on the young officers and the working class soldiers thrown into such a horrific situation.

18 year old, Second Lieutenant Raleigh is the new arrival in the company commanded by his former schoolboy hero, Captain Stanhope. Raleigh is only three years younger, but there’s a gulf in terms of the wartime experience that separates the pair. Stanhope’s world weariness and stiff upper lip mentality mean that the intolerable stress he is under is only ever alluded to. He needs a bottle of whiskey each day to be able to cope. Even this coping mechanism lets him down as the play develops. The small ensemble cast of eight primary characters are all essential to providing a dramatic and revealing dynamic that, in such a short book, says as much about the devastation and waste of the great war as much longer novels.

"Journey's End" is a gripping and powerful read. I’d love to see this dialogue delivered on stage. It’s no surprise that this play continues to be revived. It’s a stunning and deeply moving evocation of the sacrifices made by so many young people during the conflict of 1914-1918 and well worth the hour or two it takes to read.

New film version of this wonderful play due in the Autumn of this year....

And with a splendid cast....

Great suggestion for reading a play, Nigey! I realize that there are so many plays that have succumbed to time.

I came across this excellent background reading resource for the play:
https://www.watermill.org.uk/uploads/...

There seems to be a lot of "learning modules" linked to this specific play.

I'm slowly enjoying this play these darkening days of early October. I just finished Act I and found it very interesting. Sherriff is definitely evoking a bizarre image of the social world of England placed within the trenches of France during the Great War. Reading it makes me realize that I have neglected the niche of drama quite a bit. A few months ago I was taken aback by the power of Ibsen's plays. In this case Sherriff was completely unknown to me. This is one of the aspects of this group that I very much appreciate, i.e. its ability to bring forward hidden gems (at least to me) from the first part of the 20th century. Back to Act II.....

I'm so glad you're enjoying it Haaze.

That Watermill Playhouse document is very interesting and a great source of information - good find Haaze.

Such a wonderful play! I wouldn't mind experiencing a live performance of it if I ever had the opportunity. Sherriff did a great job bringing these characters to life. Excellent! Here is my review: https://www.goodreads.com/review/show...

Thanks for starting this thread Nigey and for recommending the play. I probably would never have encountered it otherwise! :)

Haaze wrote: "Such a wonderful play!"

I'm so glad you enjoyed it Haaze.

I am gratified that the thread inspired you to give it a read.

It is amazing how much can be conveyed about the crisis of war and humanity itself in a play. Especially with a single set and less than ten actors!

I have seen a stage version, although it was several years ago. It is a powerful play and I would recommend seeing it if you get the chance.
In the meantime, here is a review of the film version:
http://www.telegraph.co.uk/films/0/jo...

Thanks Val. That review is very interesting. I was curious about how it would be made more cinematic and it sounds as though it is only partially successful. I'll still make a point of watching it.