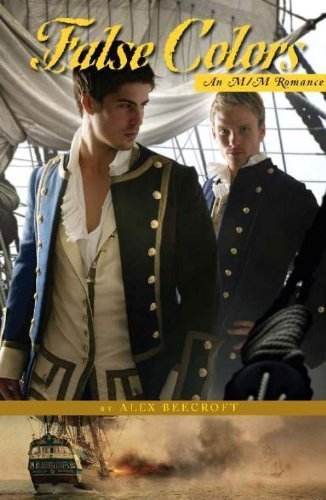 1762, The Georgian Age of Sail: For his first command, John Cavendish is given a ship—the HMS Meteor—and a crew, both in need of repair and discipline. He’s determined to make a success of their first mission, and hopes the well-liked lieutenant, Alfred Donwell, will stand by his side as he leads his new crew into battle: stopping the slave trade off the coast of Algiers.

Alfie knows their mission is futile, and that their superiors back in England will use the demise of this crew as impetus for war with the Ottoman Empire. But the darker secret he keeps is his growing attraction for his commanding officer—a secret punishable by death.

With the arrival of his former captain—and lover—on the scene of the disastrous mission, Alfie is torn between the security of his past and the uncertain promise of a future with the strait-laced John.

Against a backdrop of war, intrigue, and personal betrayal, the high seas will carry these men through dangerous waters from England to Africa to the West Indies in search of a safe harbor.

If any person in the fleet shall commit the unnatural and detestable sin of buggery and sodomy with man or beast, he shall be punished with death by the sentence of a court martial.
-Article Twenty Eight, British Naval Law Code

I am so cheap that I almost didn't buy this novel because it costs a bit over $9.00 on Amazon (even more on B&N.) That would have been a real mistake, and I urge others not to hesitate in pushing the "one-click buy" button..

For all those Regency ponces out there who blithely read their Lord Fah-Fah stories of the ton and how the nobility boffed their way merrily through the lower classes (and amongst themselves), I would direct your attention to what life was really like in 18th century Great Britain. This is a slice of actual life amongst the nobility, gentry and "lower" classes.

This is also a cracking good novel. The storyline is laid out in the synopsis, so it only remains for me to say that this is the best written novel I've read since The Charioteer and The Open Arms of the Sea.

Oddly all three novels deal with homosexuality in the British military at different periods in its history. The single unifying note is the revulsion with which the "sin" is regarded.

Despite this sounding like the most downer of books, it really isn't. There's enough action and adventure to appeal to anyone who ever got a raised heartbeat during the sea battles in Errol Flynn's The Sea Hawk. The first battle in this book had me literally reading as fast as I could to see how the engagement came out.

There will be those who don't care for the verisimilitude of dealing with exactly how being gay was treated up until the late 20th century, but to not read this book for that reason would be to miss out on such a wonderful work. (And this is from the same author who gave us Too Many Fairy Princes!)

The romance is muted and the sex scenes are non-graphic, but the sentiment between the three men making up the "love triangle" is felt fiercely throughout.

So do yourselves a favor; save your pennies, bite the bullet, and get a copy of False Colors. (Unfortunately, it can't be lent.)

It's definitely worth the money and the time taken to read it. I can't recommend it too highly.

Mod
Yes Chuck I did rate this 3 stars and because I did not write notes in response to it at the time (couple of years back), I cannot ascertain the reasoning behind the rating. I know I read this at the same period as Transgressions and Lover's Knot ... so given that I ranked the former with 3 stars as well but the latter with a whopping 5 stars, perhaps these books were rated in comparison to each other. Surely you'd agree that Lover's Knot is a much more dramatically riveting read LOL.

Hmmm. "Lover's Knot" was so excellent, but I think it's almost like comparing apples and oranges (or Star Wars and Star Trek.)

I think a lot of ratings do have to do with what one has read contemporaneously. This is why I do a lot of re-reading of even novels I thought were fairly mediocre. But some seem head and shoulders above the body of works read around the same time.

This may explain why I found Josh Lanyon's new novel on the meh side...and why I'll re-read it at a later time to give it a fairer chance .

Also, you may just respond to more romantic stories, and I do the same...only differently. So, again, this is what makes horse races...and differing reactions to stories.