This topic is about To Kill a Mockingbird
34 views
New School Classics- 1900-1999 > Mockingbird: Additional Reading

I just saw Bob mention this book, down in the 30-Day Challenge threads. With such a strong recommendation, I had to see what it was. Turns out many reviewers on Goodreads pair this book with To Kill A Mockingbird, describing it as similar in material, and quality of writing.

Here is the book:

A Cry of Angels by Jeff Fields

Bob wrote: "This year I read A Cry of Angels for the third time after it sat on my shelf for 30 years. It's still a great read and one of my favorites,"

After I read To Kill a Mockingbird for the first time a year or two ago, I read Breakfast at Tiffany's: And Three Stories by Truman Capote.

The author of To Kill a Mockingbird, Harper Lee, grew up with and was close friends with Truman Capote, and the character Dill is based off of him. Since To Kill a Mockingbird was the only book Harper Lee wrote, there has been speculation that Truman Capote wrote it instead. After reading both, I have my own opinions, but I was mostly struck with how incredible it would have been to have grown up with both of them in that tiny town in Alabama.

Lea, that is pretty interesting. I'd heard of Capote, but had no idea that he grew up in the same small town as Lee. I've never read anything by him yet. I'd like to, now. What is your opinion? Did you think the styles were the same?

I'd been doing some googling, while reading. It seems there has been some speculation, at various times, by various people, that the Robinson trial was modeled in part by several real life trials.

One was a case of her father's (he never practiced law again after, turned to journalism instead); one was the Emmet Till case; one was the Scottsboro Now, from the 30s, and I think there was another me, but it's slipped my memory now.

MK wrote: "Lea, that is pretty interesting. I'd heard of Capote, but had no idea that he grew up in the same small town as Lee. I've never read anything by him yet. I'd like to, now. What is your opinion? Did you think the styles were the same?"

I don't think the styles are similar enough to be the same author. I've no doubt that he helped edit To Kill a Mockingbird, but his writing style is not the same. He's too concise and clipped (reminds me of James Cain) and I don't think he would have included some of the details Lee did. But, many smart people disagree with me, so it might be fun to see what you think about it.

I also read that Lee and Capote had a falling out after she helped him research his book In Cold Blood. She felt like she did all the hard research and he failed to credit her properly. I don't know if it is true or not, but it's a shame. I think it is because of their different styles that together they were able to create two of the best books of the 20th century, and it is such a shame that neither of them were prolific.

Interesting stuff! There was a lost manuscript of Capote's just released for the first time in 2005, I learned recently. Something about Summer. I was hoping to read that one soon.

This link suggests Huckleberry Finn as add'l reading, and mentions the Scottsboro boys' trials as a likely influence:

Lit Charts - To Kill a Mockingbird

Related Literary Works: To Kill a Mockingbird is set in the fictional town of Maycomb, Alabama, and while it is the story of Scout's growing up it is also a story of the racially charged atmosphere of the town in the years of the Great Depression. To Kill a Mockingbird therefore falls into that particular subset of American literature called Southern literature, since it deals both explicitly and implicitly with themes and issues that were uniquely Southern. To Kill a Mockingbird also shares many connections with what is perhaps the most important book written by an American Southerner: Huckleberry Finn by Mark Twain. Both novels have a trouble-making child as their protagonist and narrator, and both novels chart the growth of those narrators as their adventurers force them to see the unfairness and brutality of their community and society, particularly in regard to the treatment of blacks.

Related Historical Events: In 1931, nine black teenage boys were accused of rape by two white girls. The trials of the boys lasted six years, with convictions, reversals, and numerous retrials. These trials were given the name The Scottsboro Trials, made national headlines, and drastically intensified the debate about race and racism in America. Ultimately, after six years of trials in which the boys were kept in jail, and despite the fact that one of the girls ultimately changed her testimony and claimed that no rape had actually occurred, five of the nine were convicted of rape.

Here are three links that talk about possible models for Tom Robinson: 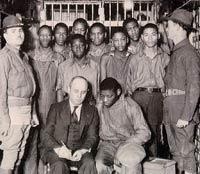 The Scottsboro Boys with their lawyer and guards (UPI photo, March, 1933).

Credit: Courtesy of Famous American Trials at the Univesity of Missouri-Kansas City School of Law.

And this article is really good, but it's about both the film and the book, leaning more towards the film, so I posted it over there in the films thread. Link - https://www.goodreads.com/topic/show/...

A Cry of Angels sounds lovely, I added it to my long list! :)