Mod
These vampires are completely evil vampires and are made to be killed. To read what a Level E is, go to the Vampire Ranks topic. These vampires wait in town, being so mysterious that they draw the attention of mortals away from others so they can attack them

Personality: (Must be evil but you can be kind in order to lure others)
History: (Explain what was happening while you were turning into level E, and what got you bitten, etc.)

Stability: (From 5 to 10)
Power: (For ex. one of the kids in the series has the power that once they kiss you, it makes you go into a deep sleep uncontrollably. Must only have one power)
5 facts about you:
Other: 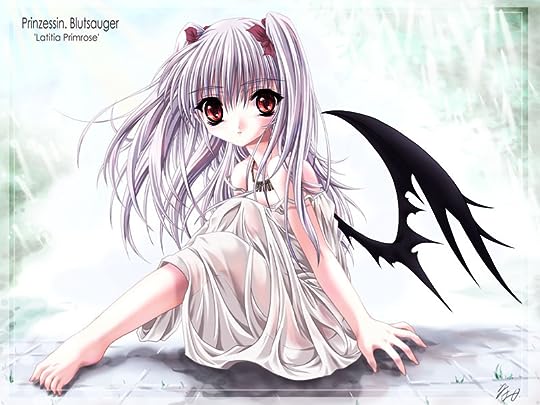 Personality: Lucy isn't like other Level E's. She is evil and will attack anything that runs from her or gets too close to her but not on her own will. Thats why she's usually too far to be captured when people see her sad face, its because she runs in hopes of no longer killing because deep inside, her evil side is the only thing thats keeping her living. She can also be stubborn at times and is alot stronger then she appears to be, so dont underestimate her.
History: Lucy was born into a family of powerful vampire hunters and was trained to be one at a very young age. She was still in training at age 5 when her parents were killed by Level E's right in front of her, and being an only child, she had no choice but to run off on her own. She regrets that choice, she thinks she should of died with them, but luckily she was too fast for them to catch up. It was cold and raining when she ran into an alley and stayed there. Everyone who heard her crying completely ignored her and walked off. Damn rich people.. Is all she kept thinking in her mind as she cried before dozing to sleep. She then woke up to a soft stroke on her cheek to see Rido. He was smirking as if he knew how much trouble she was going threw and his gaze stopped on the blood on her neck, a sign he knew she got bit. But, he took her into his care, knowing if he did she would be on his side when evil, but soon after he was put into a deep sleep by Kaname. So she lived on her own, her own body refusing the blood tablets and she soon turned into a Level E on her birthday, growing worse as the years go by.

Likes:
*Candy
*blood
*being alone
*animals
*rain
*moonlight walks
Dislikes:
*being alone
*Killing (even though she does))
*thunder storms
*sunshine
*crying in front of others
*sour and spicy stuff

Stability: 5
Power: She controls the dead
5 facts about you:
*She hates killing but her bloodlust makes her
*Loves balloons and toy bouncy balls
*loves blood
*hates being alone secretly
*is often seen crying when alone
Other: