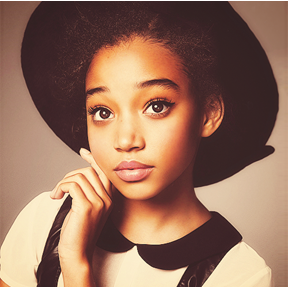 [Description:]
Amanda has short curly brown hair, which is usually really frizzy and a pain to brush. Her eyes are almond shaped which are framed by short dark eyelashes. Her eyes, are like melted puddles of chocolate. Her skin is dark cocoa colour, because of this she has had many racist jokes told to her face. She is an average height and weight. Her style is stylish, but laid back. But, she will always be wearing converses.

[Personality:]
Amanda is the biggest sweetheart you could ever meet; she's innocent, kind, caring, selfless and loyal. Although her pretty big Brown eyes and sweet personality can fool you, she can be a really big risk taker. She only takes risks if it involves her family or friends. She isn't the smartest girl, in fact, she can be quite silly. Some people call her ditzy.

Weaknesses
- Her innocents
- Meat(hates it)
- Her family
- People being racist


[History:]
Amanda was born, on the day of 18 March. She was born in St. Marie's Hospital in Birmingham. She had no sisters, no brothers, just she and her parents, who were both teachers at a private school. When Amanda was sent to kindergarten, she was quite exited, but she came back from her eyes puffy from crying. She had been bullied by some kids passing by the school. Many racist jokes had been told to her face and she hates it. But her parents were always there for her.

When she turned eight years old, her parents decided to pull her out of the private school and into a public one. The reason is, the bullying got so bad, that the parents caught Amanda glancing at the knife on the dinner table. And to be fair, the choice they made was the right decision. Amanda made a ton if new friends! Every dark cloud has a silver lining.

Sorry, she is done now! And hopefully to your approval?

She's fine just correct her name as in places it's Amanda and others Alexandra.

I'll make one when I get home or in the morning

Hogwarts School of Witchcraft and Wizardry-The...