This topic is about A Game of Thrones
423 views
which non-POV character do you wish had a POV chapter?

Varys POV would be interesting and revealing as well :)

Maybe at the end. His and Littlefinger's are actually the ones I don't want to have since I like the mysterious masters of the game stay mysterious.

I would like to have Rickon's, Willas (so we can visit Highgarden) or Margaery, and Stannis. The later would be hilarious.

A Stannis chapter would probably just be 20 pages of him grinding his teeth.

Anyway, I agree that a Tyrell POV would be interesting. More POVs from the players in the Game of Thrones, and not just their playing pieces. Though I have a feeling that a Varys POV would ruin his character, as part of what makes him interesting is how GRRM constantly has us guessing what he's up to, without ever revealing more than the tiniest hints. The same goes for Littlefinger. Some characters work better as enigmas than as POVs.

I think there are Cersei chapters in the books.

Alexandra, you can look forward to reading A Feast for Crows. Cersei is a POV character there

(I hope that's not a spoiler)

Hodor. I'm curious if his thoughts are as limited as his speech. He can clearly respond and recognize commands with actions so there is some neurological movement in that "Hodoring" brain of his.

If he does not have somewhat expansive thoughts, I wouldn't mind Euron.

Brandon wrote: "Hodor. I'm curious if his thoughts are as limited as his speech. He can clearly respond and recognize commands with actions so there is some neurological movement in that "Hodoring" brain of his.

..."
I read some news about Hodor's back story being revealed in S6

Someone else in Dany's storyline maybe? We only really see her story told through her POV so someone else there might be interesting.

Honestly more characters from the North would be nice, maybe a wilding as well? And a Tyrell please, I want to know about Highgarden!

Leyton Hightower may be interesting.

People like the Hightowers and Willas Tyrell have been being mentioned for years and we still haven't seen them. I'd kill for a POV.

More POV from any of the lords and crap that are frequently mentioned.

I'm thinking how about an animal's view? Like direwolf?

and the Other, and Jaqen H'ghar

Littlefinger is one of my favourites, though some of his actions creep me out--as it's supposed to; he's a complex character! But as much as I want to get into his head, he's much too involved in the GOTs to be an effective POV, as mentioned already.

It would never happen, but I'd love to have supplementary chapters at certain parts of the story from Littlefinger's POV once the series is over.

Brandon wrote: "Hodor. I'm curious if his thoughts are as limited as his speech. He can clearly respond and recognize commands with actions so there is some neurological movement in that "Hodoring" brain of his...."

Just thought this was funny: 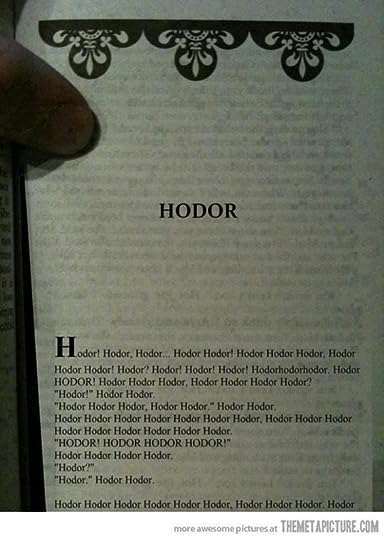 Littlefinger! His POV would reveal his dirty secrets and devious plans :) He is someone who put the whole game of thrones into motion at the beginning of book 1 of the George R.R. Martin's series. He said: "Chaos isn’t a pit. Chaos is a ladder. Many who try to climb it fail, and never get to try again. The fall breaks them. And some are given a chance to climb, but refuse. They cling to the realm, or love, or the gods... illusions. Only the ladder is real. The climb is all there is. But they’ll never know this. Not until it’s too late." I wonder what else he has to say :)

I agree with those who say a POV for Varys and Littlefinger would ruin their magic!

Id love to see chapters by a wildling or Podrick maybe! Perhaps a chapter by Maergery

Maergery, Garlan or the Hightowers..

Oh my, i would definitely read some of Littlefinger's POV. Besides that he is my favourite character, i think it would be really interesting to see wha is going on in his head. What plans does he have or what are his true feelings because everyone sees him as a player and it would be amazing to see him the way we see other Pov characters.

I would love a Bron POV chapter. Not that it would move the story much, but I think it would be hilarious! He is one of my favorites. Littlefinger would be cool too, but I agree with a previous post, Varys is great because of his mystery and a POV chapter of him might lessen that.

I would like to see chapters from the point of view of ordinary people, a nobody fighting the war, to illustrate the speech of Septan Meribald. It's a pity we only see povs from above.

Marwyn all the way.

pov for the hound. is one that would be interesting

Melisandre for the win.

Sandor, he’s rough and you want to hate him when he kills the butcher’s boy, but later he just wants to look after the Stark girls, with everything they’ve been through. He’s also less sullen at times because I think a big part of him is opportunistic (leaving the Lannisters, becoming the “Gravedigger” if the Gods are good and that’s the way the novels go)

Melisandre. Also a fascinating “villain” she tends to be one that is opportunistic and somewhat repentant as well.

I would love to see a chapter from any of the sand snakes POV!

A Song of Ice & Fire Fans