I'm working on a story that prominently features a box the main character can't open, and I want to make sure the story finds a home within other cultural notions of the "box" and what's inside.

Pandora naturally springs to mind. Adam and Eve have a similar story, but it lacks the "container." The first season of Lost ends with the castaways opening what amounts to a box full of the island's secrets. I'm sure there are others, but where?

What other stories are out there?

It was less a box and more of a jar, actually called a pithos. It reminds me of this: Huge pithos caught by fishermen 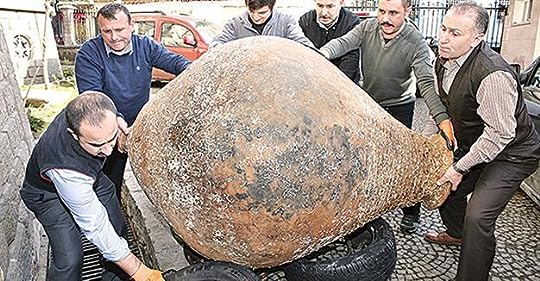 A little like a mix of Prometheus & Pandora is:

While drunk Enki gifts to Inanna all his Me (which are decree of the gods, arts of civilization). After trying and failing to get them back, Inanna triumphantly delivers them to the city Uruk.

Norse mythology's Mead of Poetry is some nasty stuff, Kvasir, born from the saliva of a Vanir & Aesir peace treaty was extremely wise and traveled until he met two dwarves who killed kim and drained him of blood and mixed that blood with honey. He helped to bind Loki, somehow.

Mimir, a wise Vanir was beheaded, although the head retained speech and acted as advisor to Odin. What trails Odin went through to obtain wisdom should be noted too with the Mímisbrunnr.

I'm sure there are others.

The pithos and box: the djin or genie which is let out in Arabic tales. .it can be grateful, or tricky, after all it wants freedom. The onus is on the opener, too. Will greed or wisdom ensue? Mike I like your idea, and Serena,you gifted new stories to my ears. Thanks!

Thanks Serena and Deborah! Great ideas!

Mike wrote: "I'm working on a story that prominently features a box the main character can't open, and I want to make sure the story finds a home within other cultural notions of the "box" and what's inside.

P..."
Hi Mike,
I just joined this group and I came across your question about boxes. I hope I am not too late to respond.

A large box or chest features somewhat prominently in the Ancient Egyptian Book of the Dead in the story of the goddess Isis and the god Osiris. In case you’re not familiar with it, here’s a brief summary.

Seth, Osiris’ evil and envious brother, makes a beautiful chest to accommodate Osiris’s exact measurements. Seth tricks Osiris into getting in the chest. As soon as Osiris does so, Seth slams the chest shut and fastens it so Osiris cannot escape. Seth and his accomplices take the chest and throw it into the Nile. The chest containing the dead Osiris floats down the river until it comes to rest inside the trunk of a tree. The tree exudes a delightful smell—which, when you think about it, makes a whole lot of sense since it contained the body of Osiris. The tree is cut down and used as a pillar in the palace.

Meanwhile, Isis (the wife/sister) of Osiris has come looking for him. She finds him, takes the chest back up the river, and as soon as she finds a secluded spot in the marshes, she opens it. She resuscitates Osiris long enough to get pregnant by him. She gives birth to their son Horus whose job it is to fight the forces of evil as represented by Seth.

The story has twists and turns that I didn't include, but that’s pretty much all there is about the chest.
I hope this helps.
All best,