How's this for 'timely'? Author Harper Lee, on her 88th birthday, has just okay'd release of her famous novel (she's never released another book) in ebook form. Below is an excerpt from an article I just came across: 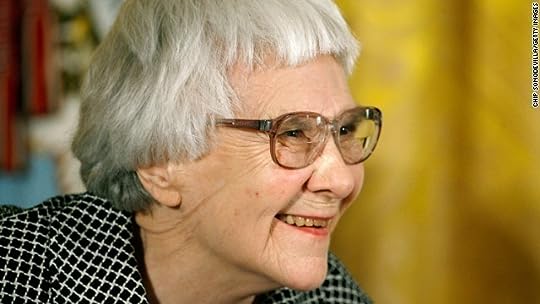 (CNN) -- Reclusive author Harper Lee has agreed to allow "To Kill a Mockingbird" to be released electronically, ending what had until now been a glaring holdout in the digital library of literary masterpieces.

Lee announced her decision Monday -- her 88th birthday -- in a statement released by her publisher HarperCollins.

"To Kill a Mockingbird" is told through the eyes of Scout, the daughter of a lawyer in Maycomb, Alabama.
It deals with a local attorney's relationship with his children and his community as he defends an African-American man accused of raping a white woman in the 1930s Jim Crow era.

Its themes of racial injustice and waning innocence, grounded in characters possessing courage and tolerance, have inspired millions of readers.

The 1960 novel -- the only one Lee wrote -- won a Pulitzer Prize and was made into an Academy Award-winning movie.

Mockingbird was chosen from monthly nominations as our May Contemporary Classic Group Read. This thread is open to full discussions about the book, go ahead and spoiler away! :)

There is also a film adaptation of this book. If you've seen the movie, and/or would like to discuss it, here's a link - https://www.goodreads.com/topic/show/...

Not an honorable way to celebrate her birthday, if you ask me...she shouldn't be caving-in to the horrible e-book trend.

Feliks wrote: "Not an honorable way to celebrate her birthday, if you ask me...she shouldn't be caving-in to the horrible e-book trend."

I'm the opposite. An avowed Kindle and ebook lover. I've never read more, than since I've gotten a kindle and easy access to so many books. Easier to store, instantly available, and less expensive to acquire. I'm a big fan :)

Mod
I can’t begrudge Ms. Lee for capitalizing on new technology and making a buck or two. I also know that ereaders are here to stay. I use a Kindle (only for classics), but I prefer paper and ink. I will never prefer electronic books over the printed hold in your hand real books. An old Kindle will never be the same as an old book with its yellowed edges.

I'm surprised, actually. As vehemently opposed to ebooks as she's been, I thought we'd have to wait a couple of decades for her estate to release the book. But ... not quite in time for the group read. You can buy it now for a $5 preorder but it's not being released until July 8th.

I've added the Kindle edition to the database. The link is here:To Kill a Mockingbird

I love my Kindle and ebooks too. It means I can carry half my library around with me in my pocket and I'm never without something great to read.

Huh. This is odd. It was actually around $4.75 when I preordered it, and I just rounded up for simplicity's sake.

Amazon sometimes gives you the lowest price it was ever at during the time you had it on pre-order, so perhaps they dropped it down to $0.39 by accident for a few minutes?

ooooo how do I check this? I wonder what they charged me

My order details also say $4.55! I don't know how to check the other way that you mentioned tho ...

Well, they won't charge your credit/debit card until they deliver the book.

But if you go to the "Manage your kindle" page ( https://www.amazon.com/myk )then click on "Pending Deliveries" in the left hand column.

Melanti wrote: "Well, they won't charge your credit/debit card until they deliver the book.

But if you go to the "Manage your kindle" page ( https://www.amazon.com/myk )then click on "Pending Deliveries" in the..."

Huh, that's not ending up good for me :p. That page says they're going to charge me $5.40. Higher than it was when I bought it, higher than it is now, and higher than it says on my order details (all three of those numbers vary, lol).

lol. Well, make sure to check your receipt in July!

I wonder what on earth is going on?! I've never seen this before on any of my Kindle orders! Though, granted, I don't pre-order all that often.

If you're worried, perhaps email their customer service? I'd do it, but I'm happy with the possibility I might get it for under $1 and I don't want to do anything to mess that up.

I'll wait until it arrives in July, and see how they worked it out. Who knows, there might be six more numbers before then :p

I just figured it out!

I still have some money from the price-fixing settlement in my account and that should cover the price of the book, but the $0.39 is the tax that the settlement funds won't cover. So the price on the "Manage your kindle" page must include tax, but the order details doesn't show tax until after you've bought it.

When looking at another book I bought last week, it shows $0.33 on the "Manage your Kindle" page, and when I look at the order details it shows the $3.99 price, the line item for the settlement funds, and a $0.33 tax charge.

Disappointing that I'm going to pay more than a dollar but mystery solved!

Hmmmm ... your mystery is solved! Hopefully, by the time it's released, mine will solve itself, and I won't be paying extra :p

So, I guess you'll still have to inspect your receipt.

We're 5% in Maine, so it must be something else.

My copy arrived on my kindle yesterday :)

MK, they lowered the price by 0.75 just after it was published.

If you didn't get the $3.95 price, you could save a bit of money by returning and re-purchasing it.

Oh man, thanks for heads up. Lemme check!

I returned it. After refund processes (3-5 days they said), I'll re-purchase it.

I didn't think to check that on the other pre-order I did (The Zhivago affair), and it's too late to do refund thing (it was published June 17).

Boo, this is souring me on the whole pre-order thingamajig

(edit - just checked, Zhivago affair is same price now, as I paid. So, I guessssss it's okay! :p)

Well, the great thing about pre-ordering is that you get the lowest price it ever was during that whole period - so if they lower it for a promotion or something, you'll get the lower price. But yeah, it's kind of a jerk move to reduce the price right after it's too late for the pre-order people!

Ooh, and I looked at The Zhivago affair. That's a double jerk move! It looks like they increased their price for the week prior to the release date, then lowered it down again the day of.

Publishers rely on pre-orders to get books to hit the bestseller charts that first week! I don't understand why they'd do things that would jeopardize that practice.

Freaky on The Zhivago Affair!


And, yea, it leaves a bad taste in the mouth to lower the price right AFTER release date (if you pre-ordered, I mean)

ps - how do you find the price histories, Melanti?

You are a wealth of information, on many topics! I'm so glad I 'met' you :)

EreaderIQ. It's a site where you can sign up for email alerts if Amazon drops the price on a book you're waiting for.

Once one person starts tracking a book, the site will start keeping track of the price over time.

By the way, a similar website that tracks prices for any non-Kindle items on Amazon is CamelCamelCamel. Very handy on seeing how good of a discount/sale you're actually getting!

^^^ that was the EreaderIQ site.

Camelcamelcamel has this notice:

"We're sorry, but due to Amazon not allowing us to track "Kindle Edition" products, we don't have any price data for this product."

I think they put that note on any book priced above $9.99.

And yep, CamelCamelCamel is for physical objects only, not e-books.

EreaderIQ does ebooks, but not physical objects.